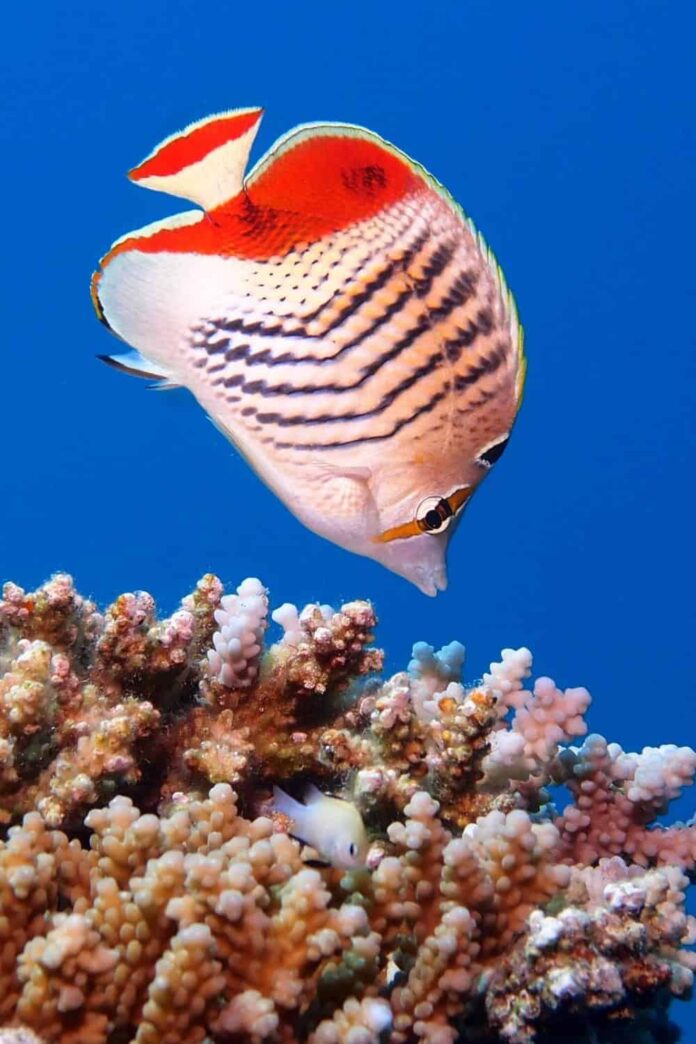 The Chaetodontidae family includes an extensive variety of Butterflyfish that come in a range of sizes and shades. In this section, we’ll briefly go over the most popular Butterflyfish species. 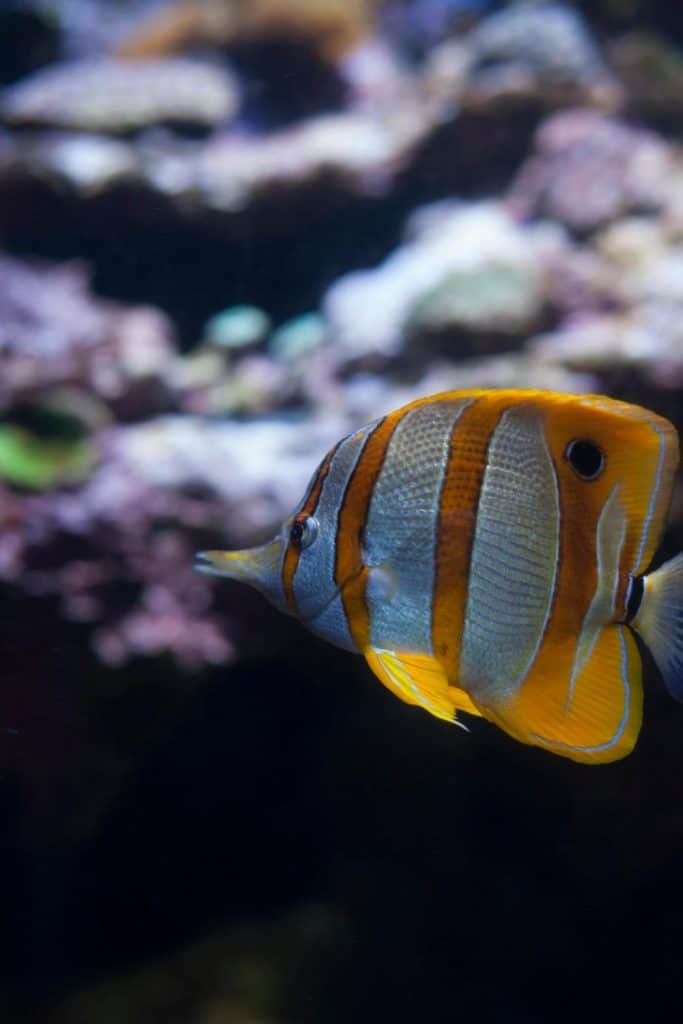 The Chelmon rostratus, is known by many names that are mostly inspired by its appearance. These include Copperband Butterflyfish, Beaked Coralfish, and Beaked Butterfly.

They’ve got prominent orange-vertical bands with a distinct black outline. The rear of the dorsal fin has a false eyespot, making it rather unique in any saltwater aquarium.

The Copperband Butterfly is best kept in extremely large tanks because adults are known to reach a maximum size of 8”, which is big for the Chaetodontidae family.

In terms of temperament, they’re peaceful and docile. Do remember to never keep them in the same tank as their conspecifics or similar-looking fish, nor should they be kept with aggressive tank mates that could elevate their stress levels.

Other than that, they’re not easy to feed. Their breeding guidelines are a bit on the tough side, and we generally wouldn’t recommend them to beginners because of their steep care requirements. If you can commit to the extra level of attention the Copperband Butterfly needs, then you will be well rewarded. 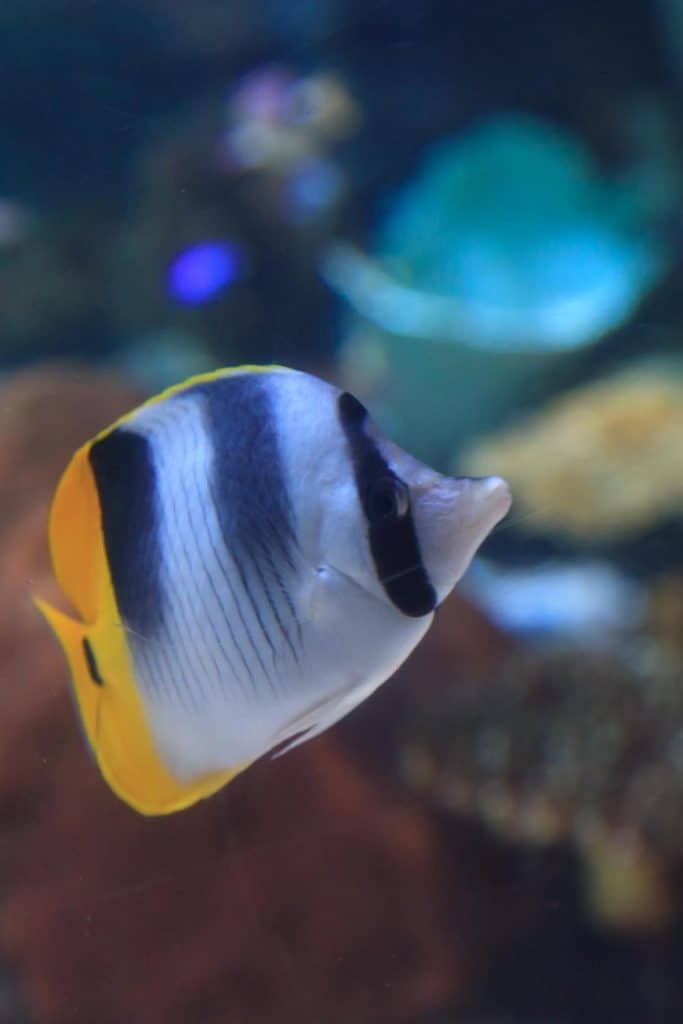 The Chaetodon Auriga, as it is known scientifically was first described in 1775 and is widely distributed across the entire Indo-Pacific Ocean among inner and outer reef slopes.

They’re a hardy species that go by several names such as Auriga Butterfly’s and Threadfin Butterfly. Their markings vary from place to place and indicate their origin.

They feature a number of diagonal black bands that run perpendicularly to each other, mimicking a distinct chevron pattern that most people are drawn to.

The Chaetodon falcula, also known as the Falcula Butterflyfish or the Blackwedged Butterfly is typically found in the Indian Ocean, from Indonesia to Eastern Africa.

They only grow to a size of about 8” are pretty docile, allowing them to be kept in a community tank without running into too many fights. The care sheet for the Falcula Butterflyfish is regarded as moderately difficult, so we wouldn’t recommend them to beginners.

The minimum tank size for these fish is 125 gallons – they need the extra space to swim around the tank. These fish are decked with a series of black stripes throughout their body, including a black eye band which is very distinct and visually attractive.

Their diet is primarily carnivorous and if you want them to maintain their markings, you should provide them with a variety of meaty foods. Refer to our Food section for the Butterflyfish to learn more

The four-spotted Butterfly, scientifically known as Chaetodon quadrimaculatus, is typically found in the Pacific Ocean. It was first described in 1831 and grown in prominence since.

The unique quality about these fish is their fine hair-like teeth that allow them to efficiently hunt tiny invertebrates that are usually out of reach to other fish for eating.

Their diet includes coral polyps, Christmas-tree worms, and feather duster worms. They have a pearly white face, yellowish dark bands on their eye, and a body that combines white and bright yellow in equal portions. You will also notice small dark spots on their lower half.

The Chaetodon miliaris, is a species of the Butterflyfish that is prominently known for its mainly yellowish body and vertical stripes on the sides.

It goes by various names, including Lemon Butterfly and Millet Butterflyfish, which is an ode to the color of their skin. These fish are typically regarded as easy for beginners because they don’t have tough care requirements.

Without going into many details, they need a tank space of at least 70 gallons because they love to swim around. They’re not aggressive and can actually be kept in pairs if you introduce them into the tank at the same time.

The Chaetodon xanthurus, or Pearlscale Butterfly as it is commonly known in most areas of the world is an orange-tailed Butterflyfish with scales that resemble a cross-hatched pattern instead of the usual chevron patterns we’re known for seeing. Their head has a distinct black vertical band which bears resemblance to their lineage.

In the wild, they’re found at depths of about 50 feet and below. They’re usually peaceful with other fish except for their conspecifics, in which case they will harass them.

The difficulty level is intermediate and the tank size for the Pearlscale is only 55 gallons, which makes them slightly less difficult than other fish 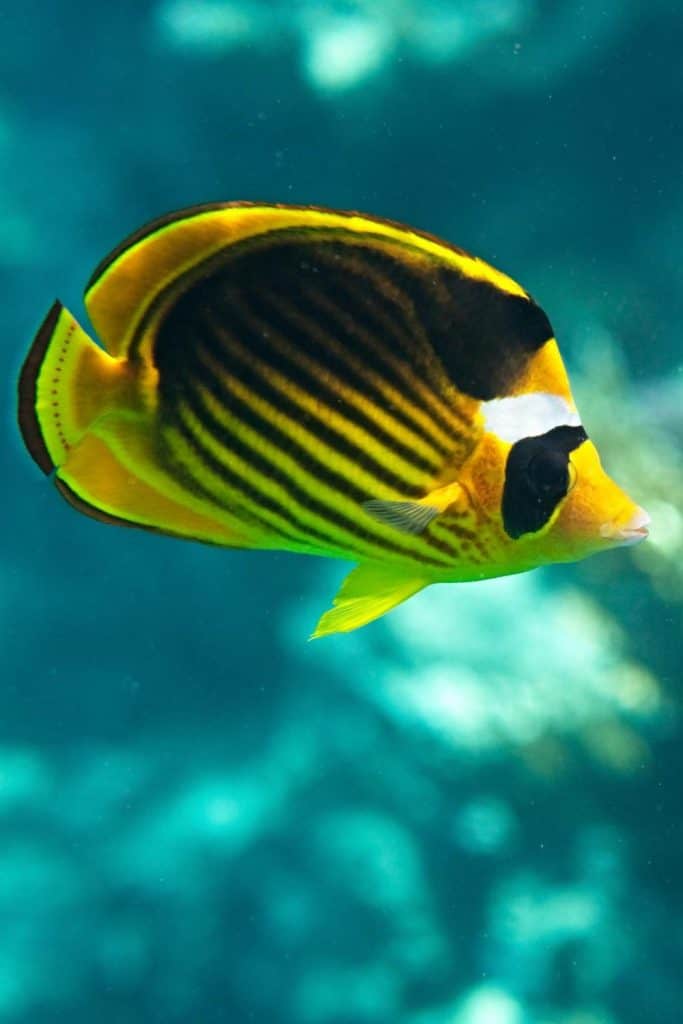 he Chaetodon lineolatus, also known as the Lined Butterfly is known for growing exceedingly large at 12 inches or more. This is why it is recommended to keep them in a tank that is a minimum of 120 gallons or more.

The Lined Butterfly is not considered to be reef-safe because they have a tendency to pick on corals and invertebrates, which is why they’re suited to a fish-only aquarium.

The care level for the Lined Butterfly is difficult, and only experts with enough experience should handle them. They have a pearl white body decked with a dark band running over the eyes and distinct vertical dark bands along with yellow-orange tail and fins. The Lined Butterflyfish gets along with mot tank mates. They’re an omnivorous species and will gladly eat both meats and vegetables.

The Chaetodon multicinctus, also known as the Pebbled Butterflyfish is tiny indeed at only 5” long, at least compared to other fish in the Chaetodontidae family.

These petite Butterflyfish prefer to live in areas with extensive coral growth, seaweed reefs, and lagoon reefs. They’re typically found in pairs but may be seen singly.

They are decked with creamy white bands running vertically across their body. The Pebbled Butterflyfish is lined with a dark vertical eyebar and a dark band in the tail fin. Some of their most common names include the Multiband Butterflyfish, the Hawaiian Pebble Butterflyfish, and the Many Banded Butterflyfish.

They’re not overly territorial with tank mates but will get aggressive with similar-looking fish, so keep them singly or use a very large tank (several hundreds of gallons).

The white band over their eyes and face make them very similar to raccoons, hence the name. These fish are prized after for their dramatic black and white markings which really stand out at night, hence the term ‘crescent-marked’.

They are carnivorous and will give their owner a hard time when it comes to feeding. That being said, the aquarist level is beginner-friendly and they don’t have overtly difficult care requirements. The minimum size for the Raccoon Butterflyfish is about 75 gallons or more.

The Chaetodon ephippium, or Saddleback Butterfly has a very unique shape, size, and color that makes it a popular choice for fishkeepers. They’re also easy to keep, although you do need to follow a few technical requirements, but nothing that should be too difficult to recreate.

The Saddleback Butterfly has a yellowish gray body decked with a large black area on the back, also known as the ‘saddle’, along with a distinct broad white band.

When fully grown, these creatures become amazing showpieces in just about any tank. The most prominent feature of the Saddleback Butterfly is a long filament extension that streams from the dorsal fin. Other common names for these fish include Saddled Corafish and Blackblotch Butterflyfish, all of which represent their unique markings.

The Tinkers Butterfly, also known as the Hawaiian Butterfly fish has the scientific name Chaetodon tinkeri. It was first described in 1949 and has since enjoyed a meteoric rise in popularity. This fish is real eye-catcher and once it acclimates to your tank, it becomes extremely robust and hardy.

The Tinkers Butterfly is truly a show stopper thanks to its attractive visuals.  The anterior half is white featuring dark spots and dramatic diagonal black markings at the posterior. Their face, tail, and dorsal fin are decked with shades of yellow and orange.

They do need a well-lit tank (not too bright) with a capacity of at least 120 gallons or more. These fish are mostly found in the deeper areas of the ocean where they feed on small invertebrates and plankton. This is why they’re not recommended for reefs because they will eat stony corals, anemones, and invertebrates.

They are mostly native to the Indian Ocean and can be found all across East Africa, Sumatra, and Indonesia. They are attractive, peaceful, and fairly low priced which makes them accessible to hobbyists. 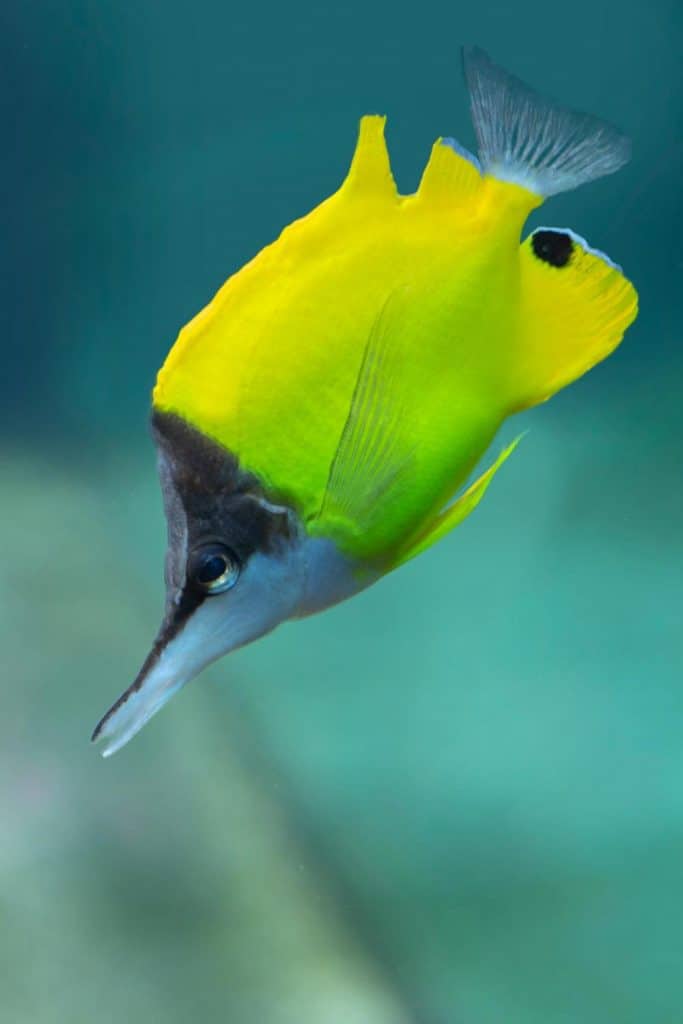 The Forcipiger flavissimus, or the Yellow Longnose Butterflyfish is a popular saltwater pet that is gentle and most inquisitive. They have a very bright yellow body with a dark spot on its back that can confuse predators. Its head is silvery white with a distinctive bar over the eyes, giving a mask-like appearance.

There is no visual difference between juveniles and adults, apart from the size, of course. Adults will typically reach lengths of 8” or 9” max. The Yellow Longnose Butterflyfish needs a minimum tank size of 75 gallons because they swim a lot.

They are omnivorous but mostly prefer to eat meats. In the wild, their diet includes corals and lots of invertebrates. This means that the Yellow Longnose Butterflyfish is not safe around reefs. Keep them in fish-only tanks and they’ll do just fine.