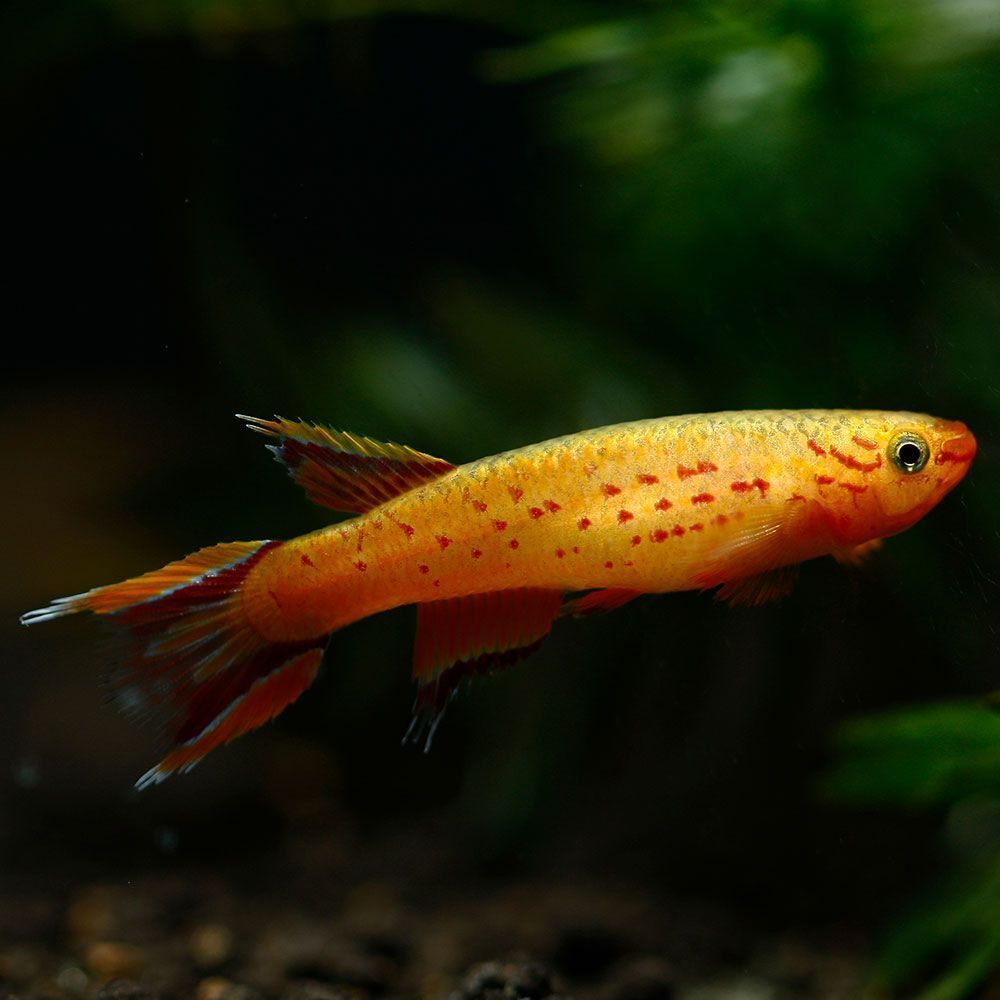 Who doesn’t love killifish? The remarkable tropical freshwater fish. It’s been a while in aquarium trades and has become a popular species among aquarists.

It has a stunning appearance but shy behavior. If you’re considering keeping ones, then look no further than Aphyosemion australe.

Aphyosemion australe or popularly known as the Lyretail Killi is a killifish native to the lowlands of Africa. As it can grow only up to 2.5 inches, you only need to prepare a 10-gallon aquarium even though a larger tank is certainly better. They can thrive in a tank environment with a properly controlled water environment.

Aphyosemion australe or Lyretail Killi refers to the Lyretail Panchax or simply the Golden Lyretail.

They are tropical fish species native to Africa’s lowland areas that extend from Cape Lopez to Gabon south with the Ogooue River in between. It has become popular in the aquarium trade industry as they’re consistently imported.

Aphyosemion australe has adorable characteristics, as they’re not only peaceful but they’re also highly adaptable to the captivity environment even though proper keeping is still required.

The Lyretail Killi is also easy to span and you can expect long-lived specimens in your aquarium for up to 5 years.

These include those invertebrates, crustaceans, and small insects that also inform us about what foods we should feed on this species.

Aphyosemion australe has a stunning appearance and they can come in diverse colors so you can have different colors of Lyretail fish in your tank.

Some common colors include orange, gold, and chocolate, and you can even find those gorgeous albino Lyretail fish.

This characteristic also makes aquarists more excited about breeding them on their tank as they might wonder about the next generation’s appearance.

Aphyosemion australe or Lyretail Killi is generally a shy and peaceful species even kept in captivity.

This behavior enables them to live properly in a community aquarium along with compatible tank mates. It also flexes the way of aquarists to choose more species for the community tank.

Males have brighter coloration and bigger sizes than the females while they also have longer fin extensions as well.

With its small size, Aphyosemion australe can fit a 5-gallon aquarium with no problem. However, you can create a better suitable and flexible environment for a pair or group of Lyretail Killi with a 10-gallon or even 20-gallon tank. This would flex options of how you can decorate the aquarium after all.

The tank would better have dense plantations to mimic their natural habitat. You can either use fine gravel substrate or dark sand for the bottom setup. You can use fine-leaved plants for the vegetation but it’s also highly recommended to make shelters or hiding places from pieces of driftwood or other materials.

The main idea of using dense plantations is to give this shy species a sheltering place and to diffuse the light. Some floating plants like Water Hyacinth or water lettuce would do a great job in diffusing the aquarium lighting. They can also prevent Aphyosemion australe from jumping out of the tank.

At this point, if you don’t use floating plants, you better use the tightly fit aquarium cover. Most importantly, you must work on the ideal tank setup to prevent Lyretail Killi from being stressed out in the community aquarium,

As the hardy species, these can thrive and adapt to a wider range of water parameters. However, it would be best if you can keep the pH value between 5.5 -7.0 and maintain the water temperature somewhere between 70-89° F while the hardness at 18-179 ppm. These allow a smooth aquarium introduction for your Aphyosemion australe.

Lyretail Killies can generally live peacefully in a community aquarium, especially with other peaceful species. However, you must avoid aggressive species or the ones that make Aphyosemion australe fit their mouth. These are some great ideas you can consider:

It should be noted that not all species in those families are suitable for Aphyosemion australe.

You need to further research the interactions and specific behaviors of the tank mates before adding them to the community tank with Lyretail Killi. The ones that share similar diets would be a great idea as well.

Another rule of the tank mates is they must not have a boisterous character that may intimidate Aphyosemion australe and make them reluctant to come out from their hiding place. On the other hand, tank mates should be able to live well in shady, densely planted environments.

You can use some resources to extend your options and knowledge about Aphyosemion australe’s tank mates. Consult the expert aquarists nearby or visit specific forums that discuss Lyretail Killi. Since there are differences, you’d find your research very helpful.

Aphyosemion australe is a straight carnivore and that’s why you won’t find them chewing the plants you’ve set in the community tank. Since they’re small in size, you can feed them with baby brine shrimp, cyclops, mosquito larvae, daphnia, and so forth. They love meaty foods but we must make them fit the killifish mouth to ensure they don’t find any difficult to chew them.

Aphyosemion australe isn’t only socially shy as they’d also keep this very behavior when fed. If the tank mates to boisterous, Lyretail Killie may choose to hide than come out to eat the foods you’ve provided.

At this point, a visual feeding would be necessary where you need to monitor whether or not your Aphyosemion australe has obtained a fair share of the foods in the community tank.

In general, Aphyosemion australe breeding is relatively easy thanks to their adaptability. However, you need to comprehend their spawning behavior and use the proper approach to ensure the process is successful without disturbance. Some adjustments in the tank environment may also be needed.

The air-powered filtration filter would also be necessary to keep the best water condition and give the proper streams for killifish to spawn.

Aphyosemion australe is an egg scatterer species so they would typically lay their eggs in the bottom of the tank. In the spawning tank, you can apply a layer of peat moss or fine substrates on the bottom.

The main idea is to replicate the natural environment in their spawning time and prevent eggs from being damaged.

Inspired by the commercial breeders, you may also use the bare-bottomed set up so you can easily collect the eggs later and clean the tank.

This way, you can use the tank interchangeably with other specimens. Sometimes, it’s pretty much like setting two aquariums when keeping killifish.

Ensure that the spawning time has an unlit condition to prevent them from being stressed out which can lead to failed mating.

When the spawning time comes, you must relocate the males and females from the community tank to the spawning tank you’ve prepared. Keep the water temperature at 70-75 °F and a pH value of 6.0-6.5 when taking care of them.

Female can lay up to 30 eggs per day and keep them for a couple of weeks.

You need to remove the eggs for incubation in a small container with a damp layer of peat moss.

The eggs are very vulnerable to fungal and velvet disease infection so you need to immediately save the healthy eggs when you notice signs of such infection.

With proper temperature setup, the eggs would hatch out within 20 days. You can lightly aerate the water if the eggs haven’t hatched within the ideal time. Once hatched, you can feed the fry by adding drops of liquifry or green water to the incubating water.

Once you notice the Aphyosemion australe fry can freely swim around the tank, you can start feeding them with baby brine shrimp. Apply daily partial water changes to keep good water quality that supports their growth and well-being before relocating to the community tank.