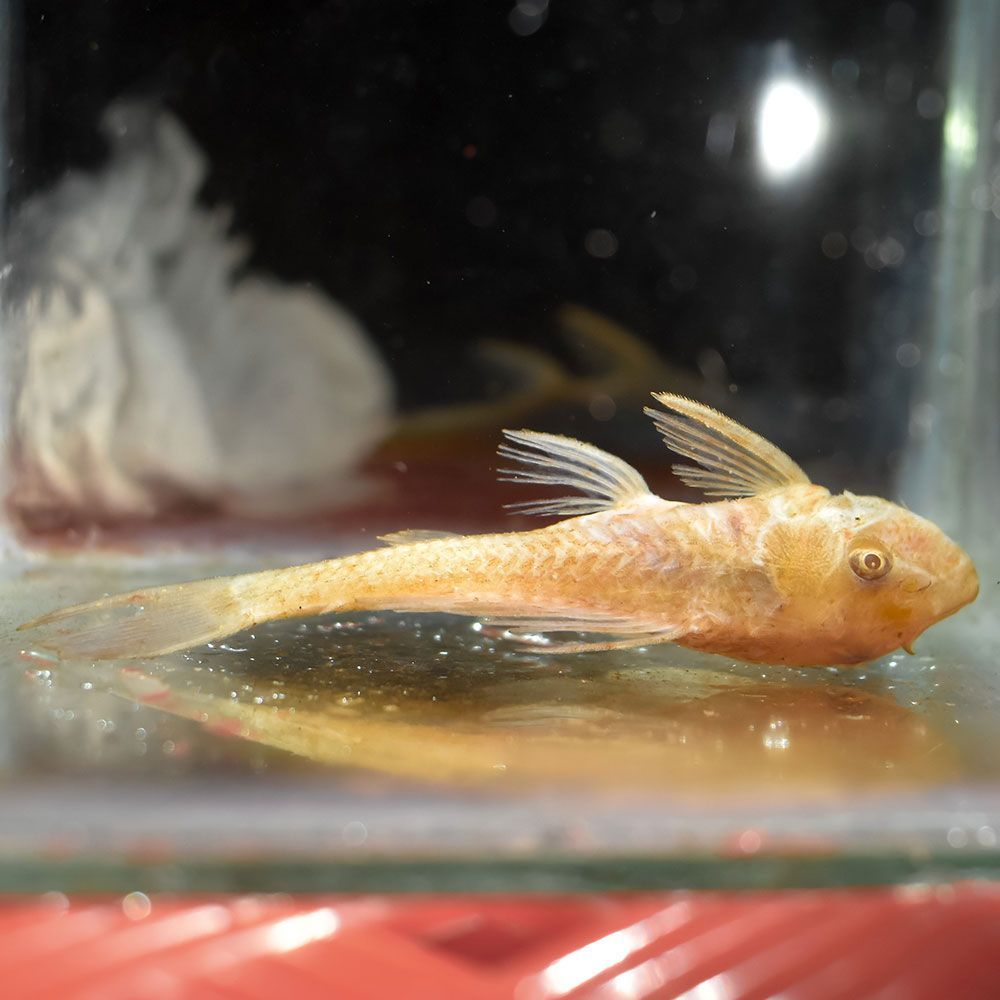 Have you ever looked at a fish confidently swimming in the water and wondered can a fish drown?

You are not the only one who thinks such weird things. We all must have wondered this at least once in our lifetime.

However, the answer to your query, can a fish drown, is No. But a fish can die out of suffocation if the water lacks sufficient oxygen and this can make the fish feel like they are drowning. So, ensure the water is well-oxygenated and passes through their gills continuously, helping them breathe.

Can Fish Drown? The Detailed Explanation!

The truth is that fish are physically incapable of drowning. Asking “can a human drown” makes more sense than “can fish drown.”

Unlike land mammals, fish have gills, not lungs. While our lungs do not support us to stay longer in the water, fish get their own set of advantages with gills. Their gills keep on producing oxygen as water passes through them constantly.

Whether you call it drowning or suffocation, something deadly happens to a fish when its breathing requirements are not met. So, here are how a fish can drown in the water.

Like any other animals and humans, fish also needs to expel carbon dioxide when they opt for breathing. Hence, while you keep them in a small tank or bowl, where carbon dioxide accumulates with insufficient oxygen, it will lead to their death.

This phenomenon may not be much visible in the natural water bodies. Ponds, lakes, or streams are filled with numerous plants capable of producing enough oxygen. However, some plants throw off the oxygen level and kill the fish.

A fish in a tank tends to die easily if the aquarium cannot cycle the water properly. Usually, oxygen gets dissolved in the water from the surface level of the tank. So, when the tank’s surface area is limited, it will lead to a lack of oxygen production.

It is crucial to add the correct number of air pumps to the tank to bring deoxygenated water to the surface area, where it can get recharged with oxygen. And this helps the fish breathe better.

Those fish that rely upon ram ventilation for breathing can suffocate and die if something holds them back from moving ahead in the water. Such fish species usually need to swim forward to get a flow of water into their gills, which aids oxygen generation and helps them breathe properly.

But when a fish is put into such a position from where it cannot swim or move forward to get a push of water over its gills, it will lead to oxygen deficiency in its body, making it suffocate and eventually resulting in its death.

This can happen when fish are caught in the nets. It prevents them from moving, causing the water not to flow through their gills. It causes a lack of oxygen in their body, leading to their ultimate death.

If the gills of fish get damaged, they will be incapable of producing a proper amount of oxygen. It will be very difficult for the fish to breathe adequate oxygen and breathe out the toxic CO2. It will increase the likelihood of their suffocation. The fish will become sick and unable to swim properly.

But are you wondering how the gills of a fish can get damaged?

When fish get attacked by predators or any other animals, their gills might get injured.

Their gills can also get damaged due to chemical elements like nitrates and ammonia.

If you keep fish in your aquarium, ensure that the tank is filled with enough oxygen. Keep the tank properly filtrated to prevent ammonia or nitrogen build-up in the water, which can harm the functioning of their gills.

Take the necessary measures to keep them safe in a proper aquatic condition and prevent them from suffocating.

Can fish drown if they stop swimming?

Fish are structured in a unique way, which makes such thoughts completely illogical. Most of the fish can breathe perfectly fine while they are in the water, regardless of whether they are swimming or not.

They are not at all going to die even if they stop swimming. Why? Well, that’s simply because their stopping of swimming will not prevent their lungs from circulating oxygen to their body. Instead, fish will do completely fine in well-oxygenated water, as proper breathing with sufficient oxygen is the only requirement for them to survive.

For some fish, swimming is vital to produce oxygen through their gills. Ceasing swimming can be harmful to those species.

Can a fish drown if pulled backward?

Yes, this can make your fish get suffocated.

Many fish are there for whom swimming is necessary to maintain the production of oxygen in their body. As such fish swim, water flows over their gills in the correct direction. It allows their gills to intake more oxygen from the water, which, in turn, helps them breathe easily.

But when you pull a fish back, it will prevent the water from passing through their gills steadily. And this will eventually lead to their suffocation, which, if persisted, can make them drown, leading to their death.

Never pull fish backward just to carry out your experiment on their drowning. Don’t give those little creatures much pain!

Can sharks die when pulled backward?

Though sharks belong to the fish family, this species is much different in many ways from the other regular fish.

Sharks can easily drown as you pull it backward, though you’ll not dare! Jokes apart, pulling a shark from backward makes the water hurriedly get inside their gills. And this disrupts their natural way of breathing, making them suffocate to death.

Do you know most fishers use this technique to kill sharks? Pulling them backward while carrying them back to the shore makes them drown and die.

Can fish drown in the air?

Drowning in the air is an impossible idea! You must have got the concept wrong! It is called suffocation. When you take a fish out of the water, the fish still receives enough air to breathe. But the problem is that they die due to dehydration.

Water serves to be a hydration factor for their gill. But when they are taken out of the water, they become unable to breathe as the air dries up their gills. As their gill gets dried up, it can no longer function, and the fish is unable to breathe, suffocating to death.

Can fish survive in milk?

As fish do simply fine in water, we might often think that whether they will also perform well in other liquids or not. So, it’s obvious to come up with a query, can fish survive in milk. Most of us will think the answer is yes, but the truth is that they won’t be able to thrive in milk.

Can fish drown in chocolate milk?

Have you ever had weird thoughts like, can a fish drown in chocolate milk? Sounds a bit corny, right? Because why on earth would anyone ever put a fish in tasty chocolate milk? But still, are you thinking of experimenting?

Well, the result of this experiment will not be a positive one. A fish will drown immediately in chocolate milk. Fish are not adapted to survive in liquids like chocolate milk because it lacks a proper amount of oxygen.

Keeping a fish in chocolate milk will make it more susceptible to bacterial infections. Fats, lactose, chocolate particles, and other milk constituents act as pollutants for fish, which might congest their gills, leading to suffocation and ultimate death.

So, just to fulfill your quench for experimentation, do not put your fish in the chocolate milk ever! Don’t give them much pain!

Yes, a goldfish can drown due to our wrong usage of words. The appropriate term for it is ‘suffocate.’ They can suffocate in the water if there is oxygen deficiency.

This question can come to your mind if you are thinking of petting bettas in your tank.

Well, before we answer this query of yours, let us tell you, drowning refers to the process of filling up lungs with any liquid or water, which cuts off the oxygen supply to the blood.

They can sometimes appear to drown. But this is suffocation, which makes them weaker enough to stay up with their balance in the water.

It can often happen in aquariums, where oxygen dissolution is limited only to the water surface. However, a tank with better circulation and plenty of oxygen is unlikely for a betta fish to drown.

Crawfish, also called crayfish, are known to be the close relatives of Maine lobster. They are not fish; instead, they are crustaceans like shrimps or crabs. So, are you wondering if these species can also drown in the water? The answer is a yes!

Crayfish can easily drown if they do not get proper access to fresh air. They can drown if they are kept in water submerged for more than 3-6 hours without an appropriate oxygen supply.

For living in water and breathing properly, crayfish require bubblers. The absence of a proper filter or air stone can make them easily drown in the water without giving them a way to breathe air. They do not need air unless the water gets depleted of oxygen.

Can fish drown in a tank?

If the tank is too small than the fish’s requirement, it becomes filled with carbon dioxide, making it very difficult for the fish to breathe.

If the water circulation in the tank is much less and the water of the bottom area fails to come up to the surface level to get refilled with oxygen, even then, fish can feel suffocated.

A much-congested aquarium with limited surface area, inadequate filtration, and the absence of sufficient oxygen-producing plants leads to the lack of oxygen in the tank, which further leads to the drowning of the fish.

Can a frog drown?

Well, have you ever tried to chase a frog? If you have, then you might have noticed how they jump straight into the pond, leaving some splashes of water on your face. But have you ever thought if a frog can drown? Maybe not!

Most of us will think that maybe they won’t drown because, like fish, they spend most of their time in the water during their tadpole stage. But do you know what the fun fact is? As a frog grows out of a tadpole, the gill that it has since birth eventually transforms into a lung, like mammals. So, yes, they can drown if their lungs get filled with water, just like any of ours.

Besides, frogs use their skin to derive oxygen from water. But if they fail to get enough oxygen in the water, then frogs can also drown.

Thus, can fish drown is a common question of many of us who get amazed seeing their excellent swimming skills in the water. This is how fish’s anatomy is created. They cannot drown, as they have built-in gills designed to help them properly breathe underwater.

But can you completely kick off the idea of the drowning of a fish? Maybe not.

They can drown or suffocate if they cannot intake dissolved oxygen from the water for various reasons.

Whenever you see a fish choke or struggle with breathing, make sure to replace it from the fish tank and keep it in properly oxygenated water.