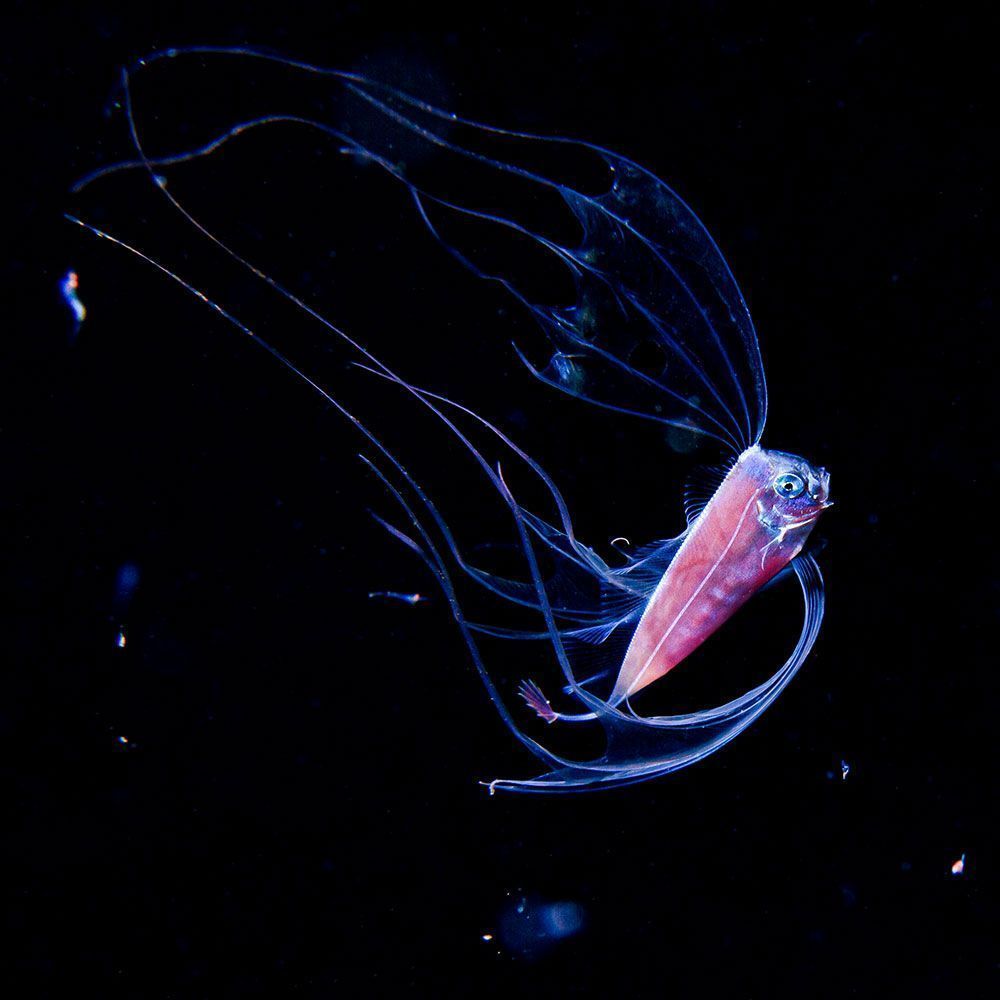 Can fish see in the dark? This is a common question for many of us.

Though we see them gliding smoothly in the tank even during the night, it is not necessarily true that they will have the same kind of vision as we do.

Then, how do they manage to see in the dark? Let’s take a look.

Can fish see in the dark? In summary, some fish have night vision to some extent, but most of them rely upon sensing and smelling to navigate in darkness. Fish use their Lateral Line System to figure out objects in dark tanks.

Can Fish See in the Dark? The Detailed Explanation!

While it is a very common sight that nocturnal fish roam around in the dark tank, there is nothing unusual to wonder, can fish see in dark water.

The truth is that they do not see similar to other animals. This activity in fish cannot be termed as ‘seeing;’ it is more about sensing. Yes, they sense their surroundings to move in the dark.

Fish have rows of pressure-sensitive organs, known as lateral lines, which run down from each side of their bodies. It allows them to sense any nearby animal or other objects from the changes in water pressure.

Unlike other fish, sharks and eels have special sense organs that let them detect any minute electric field produced by the movement of other animals.

In a Fish Tank

While it is pretty common for aquarists to think whether a fish can see in a dark tank or not, the shortest and simple answer to it is no.

Aquarium fish are not exactly capable of seeing in the dark. They move forward while sensing their nearby areas.

Most of them spend their time resting in the darkness with lesser activities and movements.

Fish that live in the ocean or deep sea are capable of navigating through complete darkness.

Ocean fish can see better in the dark, as their night vision is much improved than humans. They come with a dense spherical lens, which renders them better peripheral vision.

The retina of these fish can capture smaller frequencies of light, which makes their vision much better and clearer. Additionally, their lateral line system helps them to sense their way and the objects on their path even in the deepest ocean waters.

Fish with a higher night vision possess a few special types of chemicals in their eyes, which help them see the colors of a wide range of spectrums & some of the UV frequencies.

They even come with a protective coating over their eyes that renders them seamless vision at night. Owing to this special layer on eyes, such fish can also visualize light, dark and grey shades.

For most other fish whose night vision is not strong, they tend to sense the environment with their specialized sense organs instead of seeing in the dark.

What Fish can See in the Dark?

Scientists have found that fish dwelling in the ocean’s deep waters have a tremendous night vision, which is even better than many nocturnal animals.

These fish can even see the blue, green, orange, and red light in the depths of the sea. Amazing, right!

Can cold water fish see in the dark?

Can fish see lures at night?

Yes. Many fish species can be fed more easily in the dark. So, many uses lures for night fishing.

Some fish can perceive with their eyes even in low light and dark conditions. Though such a lighting condition is interpreted as dark by us humans, it is likely enough light for fish to see and navigate for feeding.

Whether a fish can see lures in the dark or not entirely depends on their habitat and environment where they live.

Some fish that dwell in deep waters, known as the bathypelagic zone or abyssopelagic zone, can see ultra-low light at night and feed on prey.

Few other fish that live at the ocean surface can only see in the daytime to hunt and escape predators, but they badly fail to see any light at night.

Can fish find food in the dark?

The answer is a partial yes.

All fish have night vision to some extent, but most of them depend on their sense of smelling or hearing or lateral line system to find food in the darkness.

Can betta fish see in the dark?

Betta fish come with a very weak vision in darkness. They have the habit of growing in much murky water, they mostly enjoy staying in clean and freshwaters. This is why they have a much weaker vision in the darkness.

Bettas are specifically monocular. They are capable of seeing objects in two different directions at the same time.

Bettas have poor vision due to their slower iris functionality. It becomes pretty difficult for them to adjust quickly to the changes in light intensity.

Can goldfish see in the dark and find food?

Goldfish are not capable of seeing in the dark. However, they have a strong sense of smell, which helps them to navigate in dark areas.

Also, similar to other fish, goldfish have a Lateral Line System, which works as a set of sense organs. It helps them detect water pressure changes and navigate through the darker areas.

Can a GloFish see in the dark?

GloFish requires a minimal amount of light to see underwater.

You can observe that the emission of GloFish’s light is much better in low light settings.

Can koi fish see in the dark?

Koi fish is not that good at seeing objects during the night.

Koi fish tend to stay more active during the daytime, while they prefer sleeping at night when the sky remains dark and the water temperature drops down.

There is not much need for koi fish to see in the dark as they remain inactive.

Can molly fish see in the dark?

No, mollies are not much capable of seeing in the dark.

Molly fish use their lateral line system for moving forward or getting alerted if any animal approaches them at night.

Can guppy fish see in the dark?

No. Guppies cannot see in the dark when you turn off the lights of their aquarium.

So, always keep the lights turned on while feeding your little guppy fish. As soon as the light goes off, they won’t be able to see anymore and thus miss out on their food.

Fish do have night vision to some extent. But instead of sharply calling it ‘sight,’ it is better to tag it as sensing. The majority of fish have the power to sense and smell in the dark, which helps them to navigate smoothly.

It seems equal to having a strong night vision. Fish are blessed with special sensitive senses, which relieves them from facing any movement-related issues even in darkness.