They can add depth to your marine tank like no other saltwater fish. They are relatively low-maintenance and have an explosive temperament that could be their undoing if you’re not vigilant!

They are relatively widespread among hobbyists due to their robust immune systems (they won’t die easy) and hold their own against large species but will go after fish that encroach on their territory.

Brief Overview: What is a Damselfish?

With a temper that runs boiling 99% of the time, the damselfish have earned a very apt nickname, “the Blue Devil.” They’re bright blue and always angry, ready to engage fish that are massive in size despite being just a few inches tall.

They originate in tropical coral reefs but can be found in temperate climates as well. One prominent hotspot for damselfish is near the Catalina Islands in California. A few damselfish variants have been found in freshwater lagoons, brackish waters, and even in mangroves. Some variants have been spotted in warm climates of the Pacific Mexican coast, like the Garibaldi fish.

The main draw of damselfish, apart from their striking appearance, is that they are incredibly hardy. Fish do not require a specialized diet and will do just fine with any food you feed them.

In the older days of fishkeeping, before fishless cycling became commonplace, damselfish would be used to cycle saltwater tanks because they could tolerate levels of nitrates, nitrites, and ammonia that could otherwise kill off any other saltwater fish.

Most Damselfish variants live within water columns, but some have been found to live at a depth of up to 100 meters.

They can be found in vibrant shades, including blue, yellow, orange, and red.

They grow to over 3 inches in length and are bright blue in appearance. Males Damselfish have a yellow-coloured tail with a snout, but females and juveniles lack these yellow highlights. You’ll notice that when Blue Damselfish feel threatened, they turn black in just a matter of seconds. It is a great way to tell if they’re stressed out.

These fish are native to the Caribbean oceans and carry the scientific name, Stegastes partitions. The front half of their body is dark black/grey, and the rear is pale. They are pretty big at about 4 inches and, therefore, a little more aggressive than the Blue Damselfish.

These popular damselfish have a blue body, like the Blue Damselfish, but they have a prominent yellow tail fin. They reach only 3 inches in size and are often regarded as among the best types of damselfish because they’re not very aggressive.

They are also known as the Half-Blue Damsel fish because their body is parts blue and parts yellow. They only grow to about 3 inches and are tough.

Domino damselfish, also known as the Dascyllus trimaculatus, is named because of the three distinct white spots on their body. They can grow to a length of 5 inches in size, which is pretty big as far as damselfish go, and therefore, too aggressive to other species. 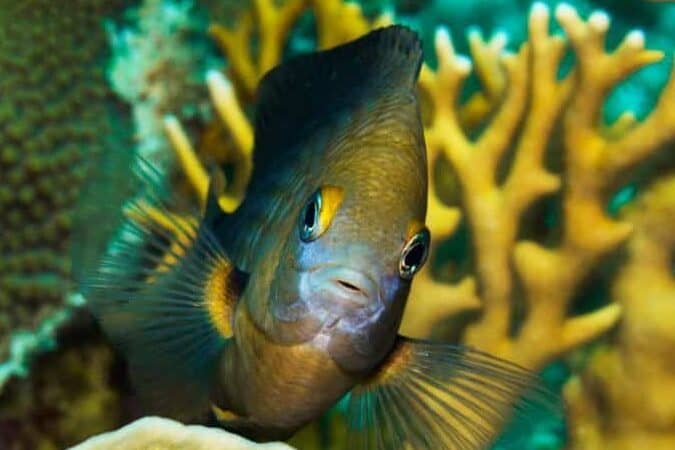 Yes. Most damselfish are known for being violent towards other fish, especially species that don’t know how to defend themselves.

Their temper has earned them a pretty bad rep in the fishkeeping hobby. They’re so aggressive that they’ll try to bite your hand if you put it in the tank.

Blue damselfish have been known to continually harass their less aggressive and docile tank mates, sometimes to the point of death. Even though most of them are small in size, they are very territorial and will try to claim the whole tank if it is small.

Anything they deem to be their spot, they will aggressively defend. They will chase and nip at other fish around that don’t fight back. It requires keeping a very close eye on them to spot aggressive behaviour. Fish that are victims of such behaviour will become stressed and withdraw, causing them to become sick and stop eating.

When they aren’t harassing other fish or defending their territory, the Blue Damselfish will spend much of its time feeding. Small variants of the damselfish will swim to the bottom of the water column, while large damselfish prefer to feed higher.

They are omnivorous and prefer to eat both live and frozen food, especially flake foods. Some Damselfish species are herbivorous and prefer a diet of vegetables, so do your research before selecting the right food for your fish. The Blue Damselfish is omnivorous but enjoys eating lots of protein-rich foods, including copepods, shrimp, squid, and small meat pieces.

What do Damselfish Eat in the Ocean?

In the wild, damselfish have a varied diet that comprises plankton, algae, small crustaceans, and small yolky eggs that belong to other fish.

Can Damselfish Live with Clownfish?

Clownfish and damselfish share nearly the same water requirements and will peacefully co-exist together. However, you will need to provide them with a large enough tank, at least 30 gallons; otherwise, there would be too much in-fighting.

They are very aggressive towards other fish, including their kind. It is not recommended to keep different species of Damsels together in the same tank as a general rule. You should stick to just one species of damselfish per tank. If the tank is tiny, do not mix two or more different Damselfish species – this is a recipe for disaster.

You can introduce other fish only if you’ve got a relatively large tank. Ideal tank mates include similarly sized fish that are semi-aggressive and know how to fight back. Avoid timid species altogether. It is recommended to introduce damselfish into the Aquarium last. This way, every other species will have claimed their territory and prevent the damselfish from going on a quest to liberate different tank areas.

Oddly enough, damselfish get along fine with most invertebrates, but if they’re too small, they may get mistaken for food from time to time. If you were to ask us, we’d avoid adding invertebrates altogether as well because they’re just too vulnerable.

Below is our list of the best saltwater tank mates for damselfish: 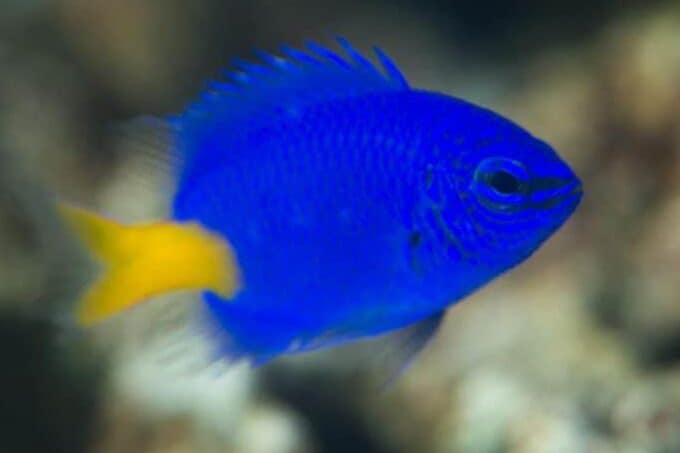 You need to check the type of water that you plan on introducing in your Damsel fish tank. Most Damselfish variants are saltwater species, which means you need to use marine water in the Aquarium. You can either buy marine water online or from a pet store. You could also prepare some saltwater at home by de-ionizing water with sea salt mix.

Do not mix table salt to the water instead of sea salt because that will jeopardize your damselfish’s health. If your damselfish happens to live in brackish or fresh water, you can provide fish with tap water as well.

Most damselfish are small in size and only reach an average of 3 inches of length. The average tank size should be about 30 gallons, but if you’re planning on keeping more than one, consider upgrading to about 50 gallons or more. If you want to keep a school of 4 Damselfish or more, you will need a 100-gallon tank.

If your Damsel fish grows a bit too long in size, for instance, 12 inches, you will need at least a 100-gallon tank. While it’s true that damselfish are very hardy, they will die in smaller tanks.

Because they are so incredibly versatile, damselfish can adapt to a wide range of water conditions. However, it would help if you strived to mimic their natural habitat in your saltwater tank.

It is recommended to install an aquarium heater to regulate the temperature at the desired amount. Use a thermometer to monitor the temperature to ensure your damselfish is enjoying its new home. Conduct a pH test every week with a litmus paper or some other pH testing kits.

Damselfish need to have their cave, or they will not do well in your tank. These fish have been known to charge at drivers who swim too near to their rocky homes in the wild.

It would help if you chose soft sand, not hard gravel, for the substrate because it could harm their fragile bodies. Just make sure to include lots of rocks, caves, and plants to provide ample cover for your damselfish and places to explore. It also keeps their aggressive nature in check.

When choosing the plants for your damselfish, it is essential to choose a combination that will fit all the tank inhabitants. Will the plant be too aggressive toward them? Will the damselfish accept the plant? The most important thing is to ensure that all the plants you choose are healthy and adequately quarantined for a few weeks before introducing them into the tank.

Sick plants will have bacteria that will aggressively attack other plants and release chemicals into the water that could upset the tank’s entire balance. So be careful! Below are a few saltwater plants that you may want to introduce in a tank full of damselfish:

He will change his body’s colour, emit clicking sounds, and make random voracious movements in the tank. If the female accepts his little dance routine, the male will initiate the spawning session.

The female will lay her eggs on the male’s preferred nesting site and aggressively defend it from other fish. Males may exhibit a violent behaviour known as filial cannibalism,

They eat some of their eggs to gain the necessary energy needed to care for well-developed eggs. Their parental nature is to eat dead eggs to prevent the spread of a fungus that could affect other eggs’ health.

Eggs will take around four days to a week to hatch. Juvenile damselfish eat zooplankton and phytoplankton to sustain themselves. They take a long time to reach maturity, about 2 to 3 years, or even longer, depending on the variant in question.

It is worth noting that breeding Damselfish in captivity is easier said than done. Most aquarists don’t have the patience to wait for a pair to mate and prefer to buy new damselfish. Nevertheless, you can still keep pairs together and wait for them to mate.

The primary reason why most damselfish die early is due to prolonged exposure to unhealthy levels of ammonia. Due to this, their bodies turn a dark color and the spots, and they eventually die.

It is not a good idea to introduce damselfish as the first inhabitant of the Aquarium to create a nitrogen cycle. Not only is this strictly prohibited, but it is also unethical because creating a nitrogen cycle puts a tremendous strain on their body. Live rocks will do just the same for you.

Other than that, Blue Damselfish are vulnerable to specific parasitic diseases such as the following:

If you suspect your damselfish is under the weather, consult your vet as soon as possible. Most hobbyists advise to keep the water’s salinity at around 1.010 to ward off parasites, but this will also affect your damselfish’s health.

The average Damselfish size is only about 3 inches in length, but some of the rarer variants have been known to reach 14” in size as well.

Where to Buy Damselfish

Because they are such a popular saltwater fish, Blue Damselfish – and indeed, most variants of damselfish – are easy to purchase from typical marine pet stores, online stores, and online forums. Rare species may be hard to come by and will cost a fortune.

Final Thoughts: Are Damselfish the Right Fish for Your Aquarium?

If you are looking to add a hat blue, bright splash os f color to your marine tank, then the damselfish is the perfect choice for you. It is small, challenging, and readily available.

Blue Damselfish are perfect for beginners because they are incredibly resilient to common beginner mistakes such as a low nitrogen cycle. Just make sure to do your research before buying a Damselfish because there are over 250 variants; some may have special requirements that we may not have covered in this guide.

Click here to know the 30 most popular Fish for your Aquarium.