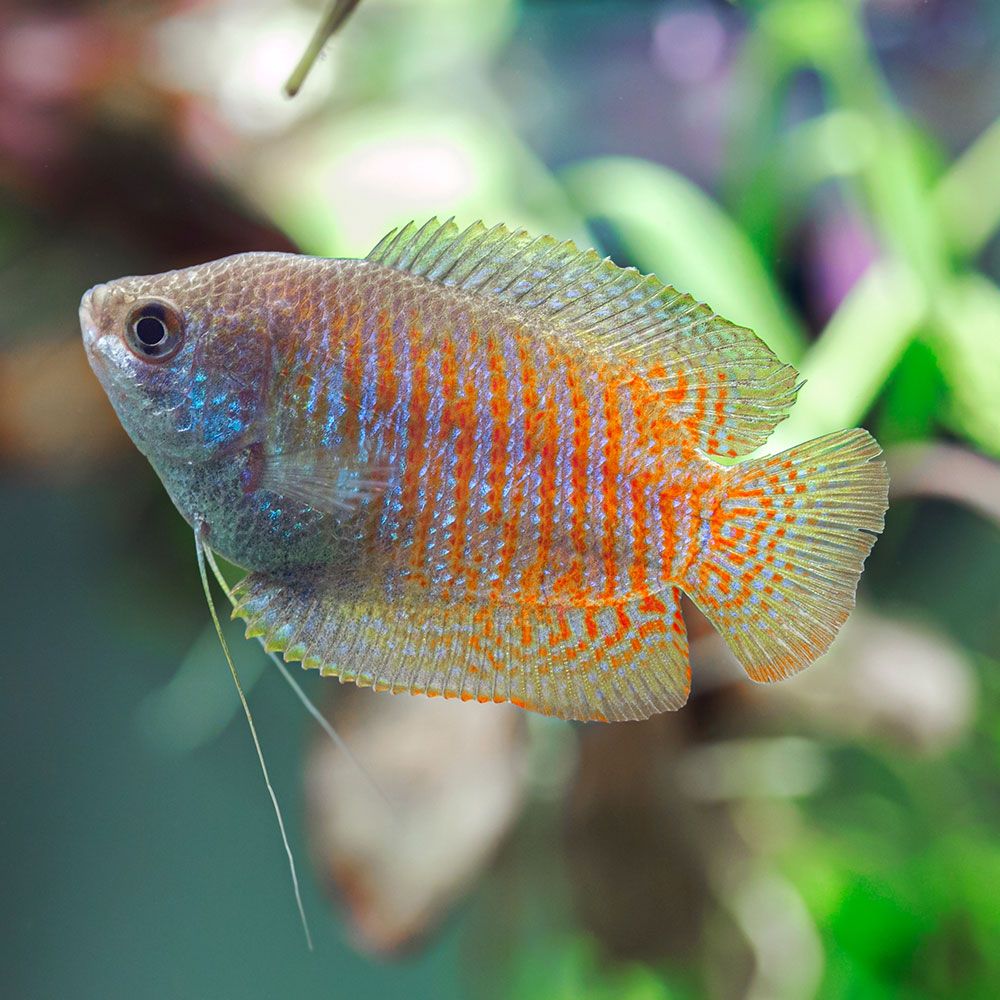 Peaceful, shy, and electrifying – these are the three words any seasoned Dwarf Gourami owner will agree with when describing their experiences. These tiny species are a popular staple in most home tanks due to their ease of care and prominent appearance.

Their unique appearance and timid personality often land them in the top 10 beginner lists for freshwater fish. They are hardy and generally resist all kinds of diseases.

For more details on how to care for them, check out this detailed guide.

Dwarf, also known as Trichogaster lalius, come from the slow-moving freshwaters of Southern Asia. However, they can now be found in parts of Colombia, Singapore, and the USA because of extensive trade.

Dwarf Gouramis are a member of the Osphronemidae family, also known as the Gourami family. Most fish from this family is a staple in home aquariums because of their ease of care and small size.

Their average lifespan is about five years, but if you provide the ideal conditions for their survival, they can live even longer.

What’s interesting about these species is that they have a unique organ called a labyrinth. This organ allows them to breathe oxygen from the air. It is a fairly common trait.

The term ‘dwarf’ fits this fish exceptionally well since it is among the gouramis’ smallest variants. They have a bright red-orange body with blue vertical stripes that run along the length of their fins.

It is easy to identify both males and females because of their distinct appearances. Females have a silvery blue-gray color and don’t look nearly as stellar as males.

There are several color variants, including red/blushing, neon, blue, and rainbow. Neons have a predominantly blue pattern than standard Dwarf gouramis.

The average size of a Dwarf Gouramis is about 3.5 inches. Male counterparts are known to be bigger than females but by a small margin.

As mentioned earlier, dwarfs are very passive and docile species. However, male gouramis can be quite aggressive with one another. You’ll often notice the males becoming dominant and harassing other males.

To minimize in-fighting and bullying, make sure to keep a large mixed group including several males and females – this will evenly distribute the harassment across all males instead of just one fish being bullied all the time.

For the most part, female gouramis behave well with each other. It is advisable to keep them in large tanks to keep the aggression at a minimum.

The average lifespan of Dwarf Gouramis is about five years, but with proper care, they can live a lot longer.

Below are some more details of the popular variants:

This hybrid grew popular several decades ago because of its bright red-orange stripes all across the body, including the fins. They somewhat resemble Ember Tetras and only reach a size of 3 inches.

As the name suggests, these hybrids have bright blue pigmentation that almost seems to glow. Their fins have pronounced red-brown stripes running along the length. If you look closely, you’ll notice that the fins also are slightly light brown in appearance.

Neon Blue Dwarf Gouramis features stripes of bright blue and dark red. If you provide them with the right tank conditions and feed them regularly, their appearance becomes brighter, and the fish show off bright blues and reds.

This variety has a solid blue coloration that breeders achieve throughout several generations, resulting in a prominent appearance. This variant does develop dark colors, although that’s not a common trait.

Dwarfs are tolerant fish that prefer to be kept with other non-aggressive and similar-sized fish. Bonus points if the fish also share similar water requirements.

The best tank mates would be bottom or middle dwellers because they will help maintain a healthy equilibrium in the aquarium and liven things up.

These tank mates do not disturb your fish, even during critical moments such as breeding and nest making. An excellent place to start would be other Gouramis, such as the Sparkling Gourami or plecos.

Here is our pick of the ideal tank mates:

Dwarf’s come from slow-moving bodies of water with dense vegetation. They can be found in all kinds of rivers, creeks, ponds, lakes, and canals. During the monsoon,

they go out in search of new territory and create small pools that are ideal for breeding. During this time, they need lots of light, nutrients, and plenty of heat from the sun – all of which make the place wonderfully livable.

Your goal should be to mimic these conditions in your tank.

The ideal temperature range for dwarf gouramis is in the 71 to 83° Fahrenheit range. You may have to purchase a separate aquarium heater to maintain this temperature. Some heaters allow you to program to maintain a specific range of temperatures.

Remember, they come from slow-moving waters and do not appreciate turbulent tanks. That being said, you still need a basic filtration system to regulate water quality. A hang-on filter or canister filter with an adjustable flow rate is ideal.

It is essential to partially change 20 to 30% of the water every week. A clean tank will increase fish lifespan and help them stay as healthy as possible. It is even more true in the case of fry.

The substrate for dwarfs does not play an important role because these fish don’t occupy the lower portion of your tank.

The choice for a substrate narrows down to other fish that you may already have (or plan to have) in the tank, so for example, if you have kuhli loaches, you should choose sandy substrate fine gravel.

The best choice would be drifting plants because they help to mimic their natural habitat. Examples of plants include hornwort and java moss. They will play an essential role in the breeding process.

You should also provide plenty of hiding spots for your Gouramis to use if they ever feel the need for some privacy. Start by adding ceramics and caves in the tank to help them hide.

Despite their docile nature and tiny size, they have basic hunting instincts and actively search for live food. In the wild, they’re always hunting for insects unfortunate enough to fly near them.

When insects approach them, Dwarf Gouramis shoot them with a spray of water. The insect falls into the water and quickly gets eaten.

In a home aquarium, they will eat just about anything that will fit into their mouths. It is essential to feed them a balanced diet that is rich in vitamins and nutrients. Plant-based foods help nourish them and provide them with fiber to help with digestion.

These will typically thrive on color flakes, shrimp pellets, tropical granules, and aqueon tropical flakes. Only feed them what they can reasonably eat within 2 minutes, once or twice in 24 hours.

Set up a special breeding tank to initiate spawning. While you can get Dwarf Gouramis to breed in regular tanks, juveniles will probably get eaten by their parents or other fish.

These create bubble nests on plant surfaces. To initiate spawning, you will have to reduce the tank’s water level by up to 8 inches and increase the temperature up to 85° Fahrenheit (but not more).

It mimics the dry season in the wild when these fish begin their breeding process. At this point, you should feed them lots of live food to give them the stamina and strength necessary to breed.

Males will court females until they reach a point where the pair embraces and the female releases her eggs.

The male then proceeds to place the eggs in the bubble nest, and the process repeats until the female has laid all her eggs.

In an average spawning session, female will lay up to 600 eggs.

Once the breeding process is complete, the male will cover the bubble nest with even more bubbles.

It is vital to remove the female because the male will perceive her as a threat.

The eggs should take no longer than 12 or 24 hours to hatch, but the fry will stay in their nest for 2 to 3 more days.

At this point, it is necessary to remove the male as well.

It is essential to maintain the water’s quality at a high level. It is not advisable to use filters because they could hurt the fry. This necessitates replacing the water by hand and filling dechlorinated water instead.

Once the fry is old enough to swim around and explore the tank (which should only take 2 to 3 days), it is time to feed them live food like newly hatched brine shrimp.

Once they grow to about half an inch in length, you can add them to your community tank. Make sure the tank has plenty of hiding spots for juveniles so they can seek shelter from more significant, more aggressive fish.

Keep their diet varied to help them grow quickly and achieve their biological potential.

Dwarfs are a hardy species, but they are sensitive to the quality of water. If the tank’s parameters stay in a state of constant flux, they could get sick.

A few of the most common diseases include:

It is a viral infection with no cure. It will degrade the fish body’s color and affect their fin structure (the fin might fall off). Your only option is to make sure it doesn’t happen by regulating the water and keeping it within the acceptable range.

It is a hazardous infection that almost always leads to the death of your fish. There are no known treatments, but you can control it by boosting your fish’s immune system. It ultimately depends on a varied and balanced diet along with ideal tank conditions.

Can a dwarf gourami live with a betta?

Dwarfs and Bettas are a bit territorial and may end up competing for their spot. However, you can circumvent this behavior by purchasing a large enough tank.

You should also have a backup tank just in case the fish don’t get along at all. As a general rule, so long as the fish aren’t experiencing signs of stress, they should get along well. On the flipside, both Bettas and Dwarf Gouramis have similar water requirements.

Can 2 male dwarf gouramis live together?

Keeping multiple males in the same tank is inviting trouble. But you can minimize the chances of conflict by increasing the tank size and providing all the fish with ideal hiding spots.

It is essential to maintain a female to male ratio of 3:1 in favor of females. Without all these conditions, males will quickly turn hostile to each other.

Dwarf Gouramis are not classified as schooling fish, but they will get along well with other species. It is highly advisable to keep them with other gourami species.

Dwarf Gouramis can be purchased from most online pet stores for a reasonably small price. You can buy rarer species from local pet stores and hobbyists, but the price may be a bit steep depending on the species’ rarity.

Dwarf Gouramis will make your aquarium lively with their dazzling appearances and adventurous personalities. They are resilient and don’t require much care, making them ideal for beginners and experienced aquarists alike.