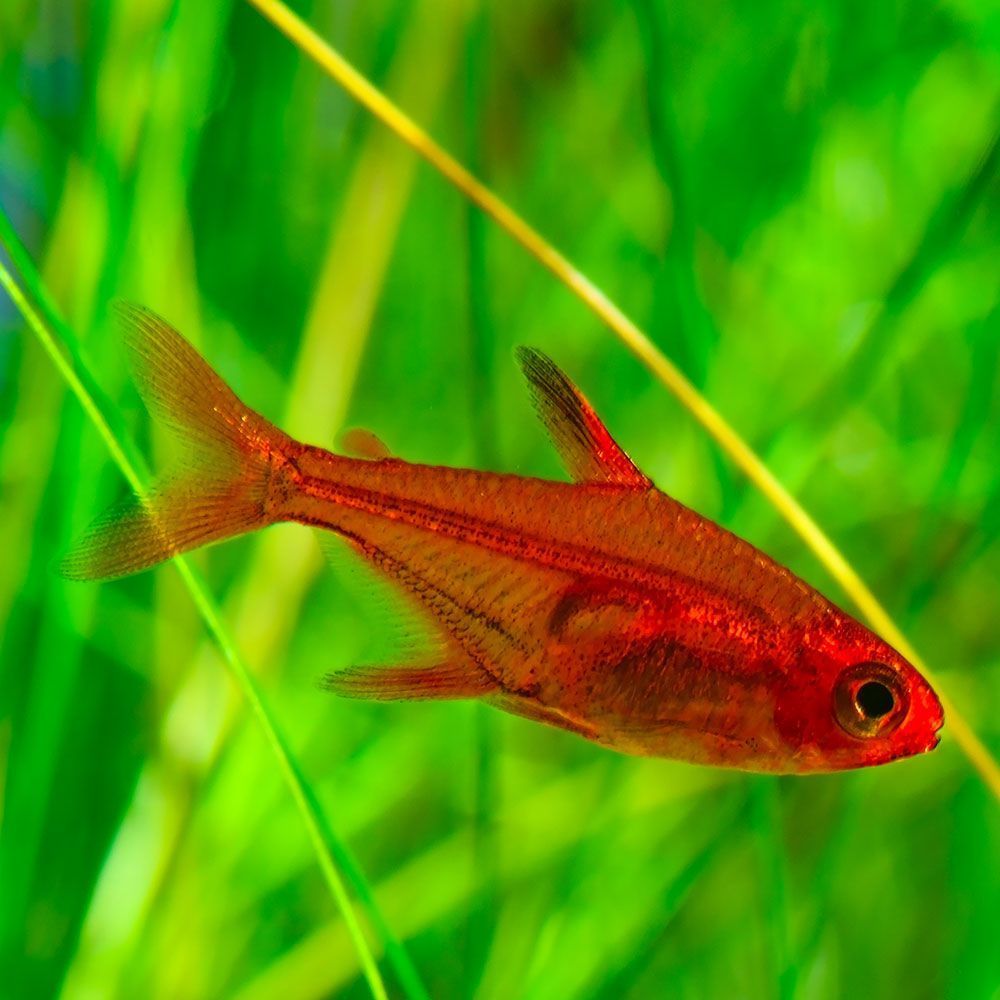 The ember tetra has risen in popularity in the last few years because of its striking appearance and playful temperament, making it a great addition to any community aquarium.

They are easy to take care of, well-mannered, and super cute. Its hardy temperament enables tetra to tolerate most water conditions.

This fascinating little freshwater fish is highly recommended to fishkeepers of all experience levels. Despite all its plus points, very few people have heard of them, but that may soon change.

In this guide, we’ll go over the key things you need to know about Ember Tetras. By the time you’re done reading this, you’ll know the ins and outs of what it takes to take care of these species.

Originating from the slow-moving waters of Western Brazil, the Ember Tetra belongs to a diverse order of fish known as the Characiformes (with over 2000 fish in 19 families). Among these species, the Fire Tetra is the most well-known for its unique appearance. Because of their fiery appearance, they are also known as Fire Tetra.

If kept well in a tank, they can live for up to years and only reach lengths of up to 1-inch max.

Because of their striking appearance, they can be easily recognized. Ember Tetras are characterized by a fiery red appearance that may have orange overtones.

Their eyes have an orange rim. Their tiny bodies are a little elongated, with females being slightly oblate during the mating season. Female fish also tend to have larger air bladders in comparison to males.

Furthermore, their bodies are slightly flat towards the back. This unique shape aids them in moving around more smoothly and incredibly swiftly, despite their small size.

Their pectoral and ventral fins are almost completely transparent and make a slight flicker as they swim. For this reason, they are fun to watch in the aquarium.

How to spot the differences between male and females? You’ll have to see the air bladder to know the gender. A large and round air bladder indicates female tetra. On the other hand, males have pointed and smaller air bladders.

They are swift and active swimmers and can be very playful in their Aquarium. You would expect them to be timid due to their small size, but that isn’t the case. They are always hanging around the middle section of the Aquarium (they seldom, if ever, swim to the bottom).

It is worth noting that Ember’s require some time to adjust to their new settings. Expect them to act with lots of paranoia and be overly cautious. Over time, however, they will happily get along with other fish. If you place them with other peaceful and passive fish, you will make them feel at home much faster.

They will often check out other smaller fish and get up close. Understandably, they don’t get aggressive due to their small size of about an inch.

They are social creatures that prefer to live in groups of 8, 12, or more.

The ideal aquarium size should be a minimum of 10 gallons. You can easily keep a group of Ember Tetras and place several essential plants at this size.

If you want to keep a more significant number of fish in communities, you should buy a tank with a volume of about 25 gallons. It provides them with the ideal balance of space, plants, and friendly fish to socialize.

Mimicking the natural habitat isn’t particularly difficult. It is the main reason why they are ideal for beginners. These are low-maintenance.

The water should be kept between 74 to 83° Fahrenheit, at mostly neutral pH values between 5 to 7, and with a water hardness of about 10.

Use a water testing kit to check the water’s parameters against established values. It will help you stay on top.

It can be easily achieved using overhead plants or adjustable light fixtures.

We don’t recommend placing the Aquarium in direct sunlight because it will stress them out as they’re not used to moving around in well-lit tanks.

The natural habitat of the Embers is heavily planted and is dotted with lots of greenery. It is something you’ll have to provide in the tank.

Some plants that you can keep include the Anacharis, Java fern, and Java moss. But don’t go overboard with the plants. Moderation is key here – place enough plants to hide and leave enough space for them to move about freely.

You can also try to place a few drifting plants like the hornwort. The tank’s setup should create just a tiny amount of movement in the water to mimic the slow-flowing tributaries and streams they inhabit. It requires the installation of an aeration system and silent filtration. Can use a regular sponge filter for this task.

Below is a list of plants that you can place in your Aquarium:

This plant virtually takes care of itself. It grows fast and can create vibrant moss beds that beautifully blow in the water current. They’re an excellent choice for fry and grazers like Ember Tetras.

This plant is virtually indestructible to abuse from overly curious fish like Ember Tetras. Furthermore, it doesn’t need fertilizers or unique soils. They will grow anywhere and create beautiful aquariums.

Salvinia is an excellent plant that is good for regulating unhealthy ammonia, nitrites, and nitrates. It also provides shelter to fry and smaller fish that want to take cover from bullies. Furthermore, the Salvinia has anti-microbial properties that may be good for the tank.

Duckweed is nearly impossible to kill – which may be seen as a bad thing by some aquarists. However, it is a quick and cheap solution for covering the top of your tank. It is a little challenging to get rid of them.

Embers are classified as shoaling fish, which means they thrive in groups. They are peaceful and never get violent with other fish, despite being relatively active. When finding tank mates, a rule of thumb is to find fish that don’t commit to the middle portion of the tank.

These are fond of staying near the middle and don’t venture out to the bottom or top of the tank very often.

Using this knowledge, you should try to find mates that won’t come into conflict. Because of their relatively small size, we don’t recommend putting them with larger fish because they may get confused as food. You should find peaceful and passive fish that are roughly the same size.

Ember Tetras are social creatures that prefer to live in at least 10 to 15 other fish. They do not like to be on their own and prefer to socialize with other fish, especially those of the same species. Shoaling fish like these that are kept alone will experience elevated stress levels that could negatively impact their mental and physical health.

If you want your Ember Tetras to develop and retain their mesmerizing appearance for a longer time, it’s crucial to provide them with a well-balanced diet. The food they eat plays an essential role in appearance and color. Make sure their diet consists of the following:

Remember, these are small and have tiny mouths, so it is essential to crush and grind their foods as much as possible. Their tiny bodies cannot process too much food in a single session. Only provide as much food as they can reasonably consume within 2 to 3 minutes.

You will have to feed them around three times per day to ensure they have the necessary nutrition to stay satiated throughout the day.

To keep their diet diverse, toss in a varied mix of frozen foods, live foods, flakes, and worms. When they see all the types of food varieties available to them, they will eat well. Good nutrition will play a positive role in their body’s overall health.

Pro Tip: Don’t worry if you notice your Ember Tetras nibbling on live plants in your tank. It is a sign that they’re healthy enough to venture out to the bottom of the Aquarium.

For the most part, they aren’t very demanding when it comes to food. As long as you provide them with proper nutrition regularly, they will have a happy time inside the tank.

Ember Tetras are hardy fish and have well-equipped immune systems to fight off diseases and toxic bacteria. It is one reason why they’re low-maintenance. They will become more vulnerable to diseases if you don’t provide them with good quality of care, such as a varied diet and regulated water conditions.

These may contract an extraordinary disease where they will turn black suddenly and start drying.

While it is difficult for parasites to invade the Aquarium, they can make their way. Signs of disease are expressed by bloating of the body or dots on the skin. Unusual behavior is also a sign that something is wrong.

Another common disease to watch out for is bloat. Bloating occurs due to the accumulation of fluids, gas, and undigested food.

Some people have a hard time telling the difference between a fish that’s eaten too much and one that is suffering from a severe case of bloat. For the most part, Ember Tetras that ate a lot of food will continue to act normal, whereas those suffering from bloat won’t.

Ich can also affect these. Affected fish will develop tiny white blotches across their skin.

Ich can attach themselves to the fins, body, gills, and moth. You will usually see fish scraping against objects (probably because the parasites are causing an itch).

Sometimes referred to as cottonmouth or false neon tetra disease, it happens because of gram-negative bacteria.

Symptoms of cottonmouth disease include lesions on the mouth and grey spots. Affected Ember Tetras will lose their colors and develop fuzzy patches because of secondary infections.

Constipation is a common ailment that usually goes away on its own. But if the condition persists, you can feed canned peas to provide more fiber. In the more severe cases, you may need to provide a salt bath.

It is relatively easy to breed Embers. But first, you’ll have to identify males and females together. Females are noticeable by their rounder abdomens and are slightly larger than males.

If they are the exclusive inhabitants of the tank, then breeding will take place without human intervention. Females prefer to lay their eggs on algae.

Once the fry emerges from their shells, it is crucial to look after their well-being because parents are known for eating their young. You may need a separate tank to maximize the survivability of the fry. They will quickly reach maturity at four months old.

Here are a few tips you should follow before breeding:

Most local pet stores have Ember Tetra for sale at a reasonable price, but you might be able to find them through online stores, forums, and hobbyists who specialize in breeding these species.

The average asking price for a single fish is usually around $3. Make sure to only buy healthy and active by carefully studying their colors.

Whether you are new to fishkeeping or a seasoned veteran, Ember Tetras will always make a good choice because of their peaceful temperament.

They are a low-maintenance species that require fairly generic water requirements. Once they acclimate to their new home, you’ll be guaranteed to have a lively aquarium for a very long time.