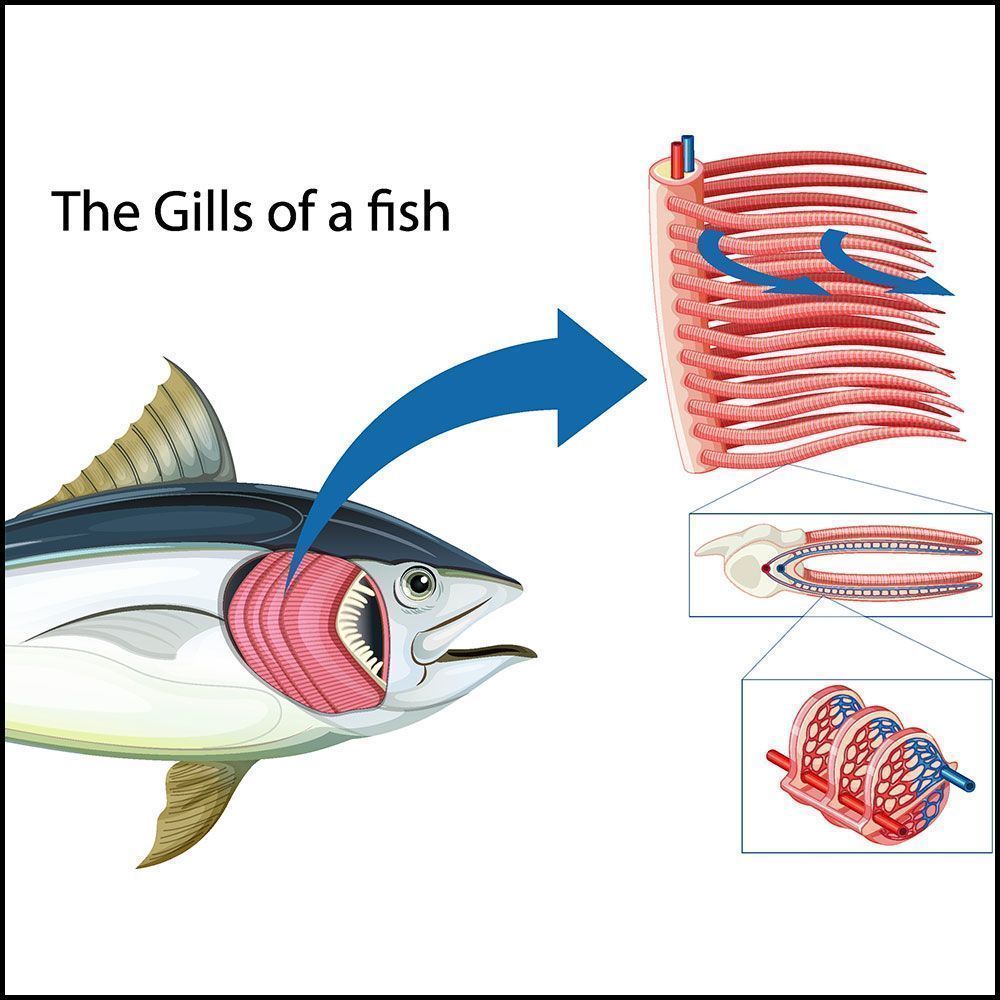 Fish gills work as one of the most vital organs in the body of fish, which help them to respire and stay alive.

Unlike mammals, fish do not possess lungs for breathing. Instead, their lungs are replaced with gills, which can absorb dissolved oxygen into the body of fish from the water.

Most fish use their gills to exchange gases like O2 and CO2 to maintain a healthy respiratory cycle.

Fish gills slits are typically made of tissues similar to short threads and protein structures. These tissues are known as filaments, which help fish breathe appropriately.

Fish gills are the respiratory organ found in most aquatic creatures, which helps extract dissolved oxygen from the water and releases toxic carbon dioxide gas out of their body.

These are adapted explicitly for allowing respiration underwater to meet the daily survival needs of fish.

The gills of fish species help in the extraction of dissolved oxygen from the water. Their gills contain many feather-like structures, known as filaments, which function in various ways to promote better respiration.

Gill filaments of fish help in transferring ions and water into their body. At the same time, it helps in exchanging carbon dioxide, oxygen, ammonia, and some acids. Each filament of fish gills contains a structure known as lamellae, supported by a vast capillary network. It provides a sufficient surface area on fish’s skin to exchange oxygen and carbon dioxide gases.

Gills, which are a crucial part of fish’s respiratory system, help to exchange gases by absorbing water through them and pumping oxygen throughout their entire body. In some fish, the capillary blood tends to flow in the opposite direction to that of the water. It results in countercurrent exchange.

Fish gills also help push oxygen-deficit water out of their gill openings present on either side of their pharynx. Also, in some fish, the gills work as the organ for urinating, which helps them to get rid of waste matters out of their body.

How many gills do fish have?

Now, how many gills a fish will have, is entirely dependent on the fish species. Most bony species have their 5 pairs of gills; however, a few of them has already lost some due to evolution.

So, post-evolution, most modern fish possess 4 pairs of gills on both sides of their head. They have evolved four gills as it enables them to extract dissolved oxygen from the water efficiently.

Besides, some ocean fish, such as sharks, possess 5-7 pairs of gills, which help them maintain their large body’s natural respiratory cycle.

How do fish gills work?

Fish gills usually work by extracting dissolved oxygen out of water. It also lets the water carry away toxic carbon dioxide gas released due to respiration.

Fish tend to force water through their gills, where the water flows over many blood vessels. The oxygen molecules are extracted through the walls of those vessels and carried throughout the body to facilitate easy blood circulation. At the same time, waste carbon dioxide seeps out of the body through the gills.

Fish require a constant supply of oxygen for their survival. Hence, gills continuously work to ensure that fish get an adequate amount of oxygen passing through their body, which is necessary to prevent their suffocation underwater.

What is a complete gill called?

A complete gill in fish is called a holobranch. A holobranch of fish comprises bony or cartilaginous arches.

Besides, the anterior and posterior part of this holobranch houses plate-like gill filaments, which form the entire respiratory system of fish.

How do gills extract oxygen from water?

As they absorb water via the gill passages, it flows through the thin walls situated over their gills. The dissolved oxygen in the water gets extracted through it and moves into the blood, which helps circulate oxygen throughout the body.

In this way, the gills of fish continuously extract oxygen out of the water to render a healthy and stable breathing cycle.

What is the difference between gills and lungs?

Fish gills are usually evaginations of the surface of their body. While some gills open directly to the aquatic environment, others stay enclosed inside a cavity. This respiratory organ is mainly found in fish. Also, frogs in their tadpole stage possess gills for breathing.

On the other hand, the lungs are representative of invaginations of the body surface. The lungs present in a mammal’s body help them to breathe through atmospheric air.

Can a fish breathe air?

Fish use their gills to take in oxygen underwater. Fish are not known for breathing in atmospheric air. Instead, picking up a fish and laying it down on the land to breathe air will simply make them collapse within a few seconds.

Even though the oxygen content in atmospheric air is higher than that present in the water of the same volume, it does not work for fish. Fish gills are habituated to extracting oxygen, which remains dissolved in the water. It helps them to have a continuous flow of oxygen through their respiratory system.

Though it is not so common for fish to breathe in the air, it is not impossible! Yes, you got that right; some exceptional fish species can breathe in oxygen from the atmospheric air.

Fish, such as mangrove rivulus, come with special adaptations, which let them breathe air. They have specialized skin with blood vessels present within a micron of their skin surface, allowing them to absorb more oxygen into their blood.

Do jellyfish have gills?

Though jellyfish have the word ‘fish’ in their name, they are not exactly fish. Thus, they do not possess similar organs like fish.

Fish are those species that are vertebrates and breathe through their gills. On the other hand, jellyfish are invertebrates. They do not require any fish gill to breathe underwater. Jellyfish are capable of absorbing oxygen from ocean water through their membranes.

So, fish gills are one of the most vital organs present in fish bodies. It not only helps them to breathe easily underwater but also performs some other necessary functions, which are essential to survive marine life.

Hence, the gills of fish need to be highly functioning. If any of your aquarium fish contracts an infection in their gills, it is essential to facilitate quick treatment so that the fish can retain a healthy respiratory cycle.