Have you ever heard of four-eyed fish? Sounds bizarre, right! Well, four-eyed fish are pretty popular among aquarists, and they are well-known for their unique construction of eyes.

These four-eyed fish come with a cigar-shaped body and a very unique eye shape via which they can clearly see both above and below the water. They are very easy to care for in a large tank. These types of fish are quite peaceful, but they can make small fish their meal.

Four-eyed fish are quite distinctive with their cylindrical cigar-shaped body. But are you wondering why do they have such a unique name? Well, the reason is their double-lobed eyes.

These fish have large eyes projected from the upper side of their head. Each of the eyes is bifurcated horizontally into two sections with the band of epithelial tissue.

Each half of the eyes allows the fish to see both above and below the water clearly, making them a unique tankmate.

The upper lobe of their eyes is flat, and the upper cornea is quite thick. Also, the eyes of these fish are rich in glycogen. It helps their eyes to keep away from drying out. Also, these fish safeguard their eyes from UV light.

Nevertheless, the lower lobe of the eye is round in shape, and its cornea is thinner than usual. These fish primarily use this eye for underwater vision.

Unlike other colorful and bright fish, these four-eyed fish are beige or grey. They have an olive-brown back and a lighter cream color on their body sides, and belly. Also, a white stripe runs straight across their back which starts from a V-shape behind their eyes.

These fish have several other thin and horizontal stripes on their body that start from behind their pectoral fins. Also, their strong pectoral fins come in the shape of a paddle, which looks quite different.

Usually, the females of this species are larger than their male counterparts. In the wild, the female fish can reach longer up to 12-inches. 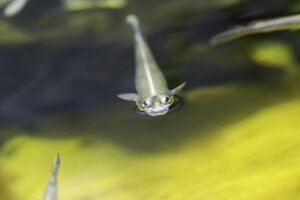 What are the Other Types of Four-Eyed Fish?

Here are three species of this fish family.

Anableps Dowei: Anableps Dowei is native to the Pacific sea’s coastal waters in Nicaragua and southern Mexico. They usually crawl on the shore to eat algae and other organic matters. The male fish grow up to 22 cm, while the female extends up to 34 cm.

Four-eyed fish are pretty peaceful. Though they are not territorial, they tend to eat tiny fish that fit in their mouth easily.

Well, these four-eyed fish usually love to stay in a school. Hence, they must be kept in a group of 6 or more. But make sure you are not keeping them alone in the tank; otherwise, they will become nervous, hampering their growth.

Four-eyed fish are typically large livebearers and stay quite active. As they grow big, you need to pick a larger tank where they can easily move and play.

Besides, these four-eyed fish like to spend most of their time virtually swimming on the tank water surface. So, you need to ensure that you are picking an aquarium that is broad instead of a deeper one.

Also, these fish are excellent jumpers. Thus, you need to have a very secure tank cover for them.

In the natural environment, these fish live near the mouth of the river. Thus, while setting up the tank, make sure you are adding enough salt to the water to activate salinity conditions in the aquarium as that of the wild.

The tank needs to have proper quality water to maintain the well-being of these fish. Additionally, four-eyed fish produce too much waste. So, you need to add an appropriate filtration to the water.

Adding a good filtration unit will provide a large colony of nitrifying bacteria, which will maintain stable water conditions.

Provide these fish enough open area in the tank to let them swim freely. You can also decorate a space with bogwood or smooth rocks to replicate their natural habitat.

Also, it is recommended to add a mixed substrate for your four-eyed fish. But it would be better to slope the substrate so that the shallow water can lead towards a smooth and slippery sandbank area.

Do you know these four-eyed fish love to have some floating plants around themselves? But plants that go suitable with brackish water are rare in number. Hence, you can opt for some hard plants to adorn your tank. 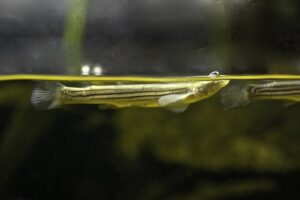 Usually, four-eyed fish prefer a shallow tank rather than a deeper one. So, you need to ensure a very proper tank setup for your four-eyed fish.

So, here is the tank setup that you need to ensure for your fish.

Though four-eyed fish are peaceful, they are predatory by nature. They will simply eat away those fish that are smaller in size and easily fit in their mouth. Thus, you have to be very careful while picking the tank mates for these fish.

Make sure you are never keeping four-eyed fish single or in pairs. They are best kept in a group of 6 specimens.

As they are schooling fish, if you don’t keep them in groups, they will become nervous. They will be the happiest when you keep in a group of dozens or more.

As they belong to the salty water environment, they are best kept with other brackish fish with a similar temperament.

However, if you keep four-eyed fish with small peaceful fish, they will serve to be their meal. Also, housing them with semi-aggressive or aggressive fish will impose a threat to your tank.

Besides, while adding large fish or surface dwellers, be very cautious. Nevertheless, keeping these fish with slow swimmers or eaters is relatively safe.

So, here is a list of fish that you can house with your four-eyed fish.

What Do Four-Eyed Fish Eat?

Four-eyed fish are carnivorous by nature. Though they can consume small vegetable matters, it is better to offer them a meaty diet. In the wild, they mostly like to have insects and small crabs. These fish also tend to eat tiny fish, invertebrates, snails, mussels, Diatoms, and worms.

They will readily accept any floating food stick, flake food, pellet, or frozen, dried food in the tank. These fish even enjoy feeding on different live insects or large crickets.

You can also offer them live or frozen foods like brine shrimps, tubifex worms, or bloodworms. Offering them Daphnia will make their diet more exciting.

Four-eyed fish look for their food in the surface area of the tank. So, it is better to offer them plenty of food near the water surface.

Also, these fish are not at all picky eaters. Thus, you can feed them a variety of food in small amounts several times a day. However, to ensure their proper and fast growth, it is vital to offer your fish a protein-rich diet.

Four-eyed fish are very easy to care for, as they are pretty hardy. Soon after they get acclimated to the tank condition, they tend to thrive well.

Their brackish tank water requires a good filtration rate to provide them a large colony of nitrifying bacteria.

Also, you need to perform regular water changes in the tank to ensure that the decomposing waste does not add many toxins to the aquarium water.

The tank needs to have a partial water change of 20% every 2 weeks. It is necessary for removing accumulating nitrates and maintaining proper water quality.

While performing water changes, you need to replace the water removed from the tank with salted water.

Besides, it is better to offer them adequate protein-rich food for their enhanced growth. If these fish are not fed properly, they will show very slow growth and can also get susceptible to spinal deformities.

Four-eyed fish will easily breed if you keep them in a large tank with adequate surface area. The young fish get matured as they grow up to 8 months of age.

Also, do you know a fascinating fact about four-eyed fish? As they are one-sided livebearers, sex organs will be found either on the fish’ right or left side.

The male four-eyed fish will approach the females and push them repeatedly from behind for breeding. After successful breeding, the gestation period will run for about two months, and they will produce approximately 10-15 young fries.

The fries are usually going to grow their tail first. They are quite large, about 2.28-inches in length. The parents typically tend to ignore the young fish.

So, to care for the fries and keep them safe from other predatory fish, you can put them in another tank where they can swim around freely.

In the nursery tank, add enough places for the baby fish to play hide and seek. The baby four-eyed fish will quickly eat small and live foods like Daphnia, fruit flies, or bloodworms. Also, the fries will accept flakes or tiny fish in their diet.

With a proper supply of food, these fish, particularly their female counterparts, will grow quickly and adequately.

Well, here are some interesting facts about four-eyed fish that you need to know before planning to pet them.

Where to Buy Four-Eyed Fish?

Four-eyed fish are very easy to find in any nearby local pet shop. Also, they come in a very moderate price range.

However, if you do not get them in a shop, you can visit a hobbyist’s place to collect these fish. Also, many online stores facilitate four eyed fish for sale. So, you can easily buy from these sales.

How Big Do Four-Eyed Fish Get?

Four-eyed fish are quite large. They tend to grow up to 11.8-inches or 30 cm. However, the females can extend up to 12-inches in length, being the largest in the group. On the contrary, the males reach up to a height of 8-inches.

But in an aquarium, these fish are usually smaller. The females grow up to only 10¼-inches whereas the males extend up to 6-inches.

How Long Does Four-Eyed Fish Live?

Usually, four-eyed fish live up to 6 years on average. But with proper care, they can happily live as long as 8 years.

Is Four-Eyed Fish Suitable for any Aquarium?

Yes, they are indeed suitable for keeping in a home aquarium. When they are first brought home, they are very prone to diseases like bacterial infections, which are too tough to cure.

But as they get accustomed to the tank environment, they become too hardy and easily cared for. Thus, beginners can take care of four-eyed fish. However, as these fish need a school of 6 specimens to thrive well together and a specialized tank setup, they are mostly recommended for intermediate aquarists.