The Longnose Hawkfish is a popular saltwater species with a highly conspicuous cylindrical body in most tanks. They’re not easy to breed and can be a bit pricey, starting at $110 or more.

Check out this in-depth Longnose Hawkfish care sheet if you plan on adopting them.

The Longnose Hawkfish originates in the Indian and Pacific oceans, where we can find it swimming near tropical reefs. We can find them at depths of 10 to 100 meters,

but will make do with a 30-gallon tank without issue. In the past, these fish have had a reputation for being difficult and expensive to obtain.

However, commercial fish trading has made it possible to obtain these fish without selling and a leg. Most hobbyists prefer to add the Longnose Hawkfish to their tank because it has a robust immune system that can tolerate diseases.

It is very curious with behavioral characteristics that are exclusive to it. Finally, their colorful patterns make them an absolute favorite among fishkeepers because they’ll spruce up even the dullest-looking tanks.

One feature that immediately stands out is the tuft of cirri near the tip of each dorsal spine. Their tail fin has a unique concave curve. The caudal fin has similarly colored ranges that are hard to miss.

Teeth are conically in shape to help them quickly grab small invertebrates and crustaceans. The average Longnose Hawkfish size is for both males and females is about 4 to 5 inches max, making them suitable for smaller aquariums.

It may be challenging to spot males from females without an expert. For the most part, males are slightly bigger than females and feature black markings on their dorsal fins.

The Longnose Hawkfish has behavioral characteristics that are unique to it and different from most saltwater fish. Fishkeepers consider them very interested and full of personality because of how they interact with the environment instead of ignoring it.

Instead of swimming around the tank searching for food and defending their territory from nearby fish, Longnose Hawkfish will find a few spots on the tank and scout their surroundings for food and potential dangers.

It allows them to quickly learn their territorial restrictions in the tank and their tank mates’ behavioral traits, which can bully species, which may put up a fight.

In their natural habitat, the Longnose Hawkfish will spend time on corals and live rock outcrops, which are ideal food spots. You’ll have to recreate this by providing them with plenty of rock works and caves to help them hide and find privacy. Longnose Hawkfish has a reputation for being secretive at times, and the fact that they possess large eyes to help them detect light under deep water.

Despite not having a swim bladder, the Longnose Hawkfish can swim at unusually high speeds for short durations. The benefit of not swimming blander is that they can rapidly dart around the tank without adjusting the pressure of the swim bladder. It gives them short bursts of speed to capture passing prey in the substrate.

It is a carnivorous predator fish so feed them with live and frozen meats. You can also provide them with dried foods, but that may require some training.

Do not exclusively keep them on a single type of food for too long. Instead, please provide fish with a balanced diet involving different kinds of invertebrates, crustaceans, small fish, and other meaty products.

As with most saltwater fish, feed the Longnose Hawkfish two times every day. Feed them only as much as they can eat within 2 to 3 minutes. Providing them can be an entertaining experience for owners. They’ll perch on rocks and corals, waiting for food to drop by, grabbing it instantly as it comes near.

Long Nose Hawkfish are known for their territorial behavior and kept without tank mates to harass. But if you decide to keep them with other fish, you’ll have to select their tank mates carefully. It is a highly aggressive predator that will gladly eat small fish for food and other invertebrates.

The best formula is to find fish that are just as temperamental and similarly sized – but not too big to pose a threat. Experts claim that Longnose Hawkfish should be the last fish to enter any tank to prevent them from viewing their tank mates as prey.

If the tank mates are already in their territory, the Hawkfish will keep an eye on them and only attack them if it gets a bit too hungry.

Caution: Do not add them with other hawkfishes because they will fight each other to the death. Do this only if you have a massive tank that is at least several hundreds of gallons. Most aquarists only add one hawk to their tank to keep in-fighting down.

If they get too aggressive, you can rearrange the décor to keep them distracted.

Below is our pick of the best, similarly sized, semi-aggressive species that make ideal tank mates for the Longnose Hawkfish:

They are very territorial and semi-aggressive, just the kind of tank mate that your Hawkfish will avoid at all costs. Should you decide to keep the Damselfish with Hawkfishes, remember to provide them with plenty of swimming space and hiding spots. Aim for a tank that is at least 100+ gallons to prevent excessive fighting. You can find Damselfish in most colors, incredibly dark blue.

Remember the rule of thumb when choosing tank mates: they should not be bite-sized, especially when it comes to invertebrates and crustaceans. Those will bring out the hunting instincts of the Longnose Hawkfish.

They only grow to a size of around 4″ to 5″. The Longnose Hawkfish can easily thrive in a 30-gallon tank, although they swim at depths of approximately 300 feet or more.

Below is a list of water conditions you should maintain to keep your Longnose Hawkfish happy:

The water should have the following chemistry to ensure survival:

Things to Add in the Longnose Hawkfish Tank

Because they’re bottom-dwelling species that prefer to perch their dorsal fins on something ‘physical,’ you should pay special attention to the choice of substrate and rockwork. Install lots of caves and rock works in the tank to make your Longnose Hawkfish feel at home.

The tank should include a secure lid because the Longnose Hawkfish tends to jump now and then, especially when they get spooked.

Longnose Hawkfish like to hang in areas with strong currents. It means you should install a filter that can create swift movement in the water. Change the water every few weeks to provide the Longnose Hawkfish with an optimum tank.

To increase the oxygenation of the water and make the tank look more stunning, consider adding a few saltwater plants. Here is a list of some ideal plants for the Longnose Hawkfish:

Tufted Joint Algae are pretty good at balancing the water’s nitrogen cycle and adding more oxygen to the tank. They should be anchored to the substrate and requiring moderate water flow for the best results.

They are densely packed in small clumps but grow very slowly. This plant needs high spectrum lighting for proper development and must protect them to the substrate for adequate growth.

They’re good at absorbing the tank’s excess nutrients, making them a perfect home for Longnose Hawkfish.

Hawkfish are a hardy species with well-developed immune systems. It is one of the main reasons they’re so popular among fish keepers.

They’re usually the very last fish in the tank to get sick. And that only ever happens if something goes wrong with the tank. When they do get sick, you can just as efficiently treat them with medications and treatments such as a prophylactic dip. 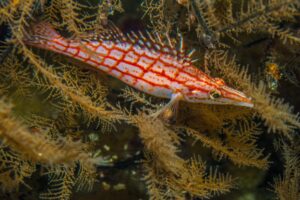 There haven’t been many success stories about Longnose Hawkfish breeding and their spawn surviving to adulthood. It partly explains why they’re a bit pricey at $100 or more because breeding can be challenging even for commercial fish farms. However, you can create ideal conditions in the tank and hope that your pair of hawkfish mate.

The first step is to identify the male from the female. It is easier said than done because they’re virtually alike. Males may be slightly larger than females with darker markings on their dorsal fins, but this difference isn’t always consistent.

Longnose Hawkfish start as females in the early part of their lives and transform into males later on. When they’re ready, males will court females for spawning. You may notice a few dance rituals in your aquarium when the pair is ready to mate.

But as we mentioned earlier, the Longnose Hawkfish fry is very vulnerable and may not reach adulthood.

Because of their territorial nature, Longnose Hawkfish will fight each other to the death. That is why you should place them in the tank as juveniles to prevent aggression. When they reach adulthood, one may change into a female and the other into a male. It only happens if one of them is significantly more dominant than the other.

If their size and levels of aggression are the same, they’ll perpetually view each other as an enemy – not a mate.

To initiate the spawning process, provide the pair with plenty of high-quality food. Turn the lights off to mimic their natural habitat. The two fish will swim together, often rising to the top of the aquarium.

They’ll release their eggs and sperm into a cloud together, often near the surface. The eggs can be difficult to spot, but you’ll see them floating because they’re buoyant.

Please do not use a net to remove the too fragile eggs because it could damage them. Instead, use a container.

Are Longnose Hawkfish Toxic to Other Fish?

Longnose Hawkfish are not toxic or poisonous to other fish. But they have very sharp teeth that can tear through flesh.

Longnose Hawkfish prefer to swim near corals and rock works in search of food in their natural habitat. They have been observed to nip on fleshy corals and will eat them. It means they’re not very safe around reefs.

Where to Buy Longnose Hawkfish?

You can buy Longnose Hawkfish for sale from most pet stores, online stores, and online forums near you. They are a bit pricey, though, starting at $50 to $170+, depending on the size, availability, and where you live.

Wrapping Up: Are Longnose Hawkfish Ideal for Your Tank?

Longnose Hawkfish bring a lot to the table: from their stunning looks to their inquisitive personalities and, of course, the relative ease of caring for them.

They’re a must-have if you’re considering an aquarium for one fish only. However, if you decide to expand your stock, you’ll have to provide them with massive tanks, over 100+ gallons, to ensure the fish never crisscross each other’s path.

Moreover, the average Longnose Hawkfish lifespan is about ten years, which means they’ll provide you with entertainment for a long time to come.

All in all, the Longnose Hawkfish is ideal for beginners, as long as they keep their expectations realistic, especially when it comes to breeding. This species will more than likely kill each other than mate with each other.