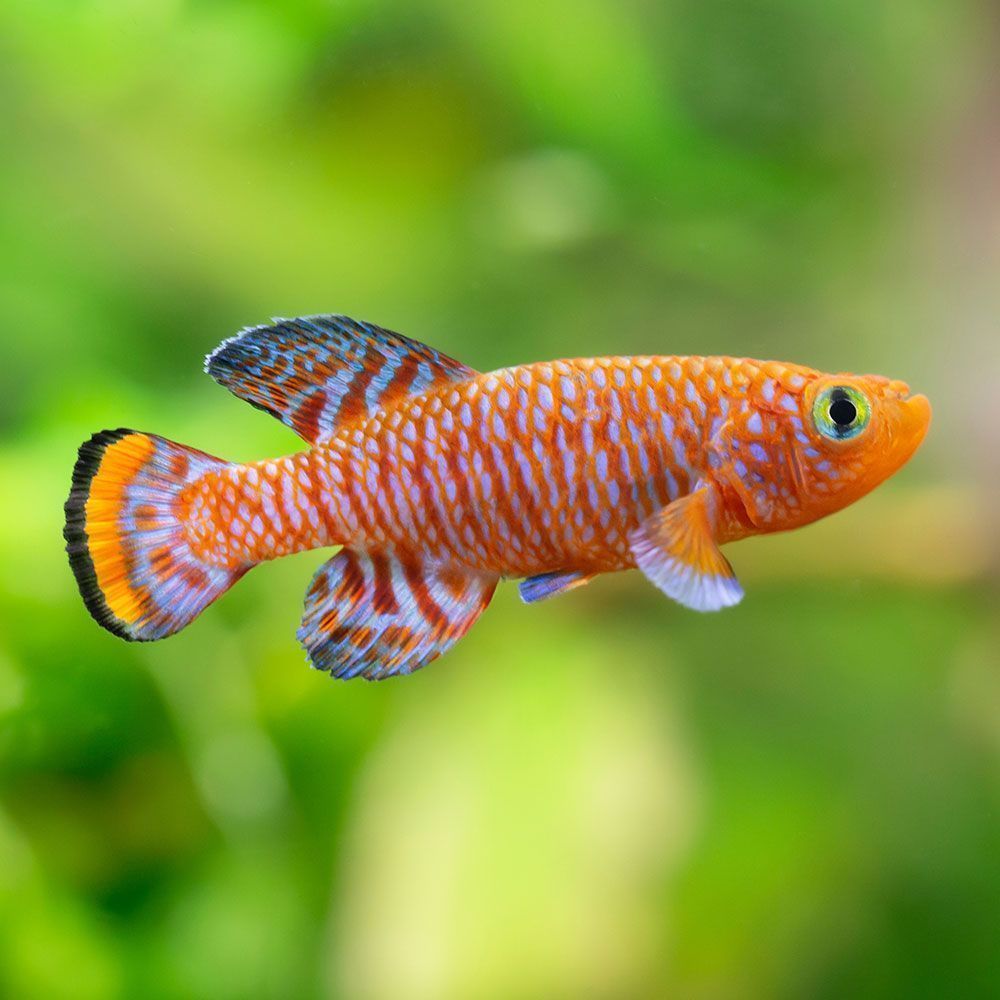 Looking for fish that make your aquarium shine? Nothobranchius rachovii has a vibrant color that would light up your tank. It’s one of the brightest colored species to add to a species aquarium.

Bluefin notho is a native species of African freshwater that’s available in the aquarium trade. Growing only up to 2.4 inches, Nothobranchius rachovii can thrive well in the same-species tank with controlled water conditions.

Nothobranchius rachovii is a species from the ray-finned genus of the Nothobranchiidae family.

The African freshwater is their natural environment but is not a popular small fish species. Their evolutionary life cycle that’s linear with the rain season is also the unique attraction of this species.

It is one of 60 different species of the Nothobranchius family that’s native to African freshwater.

However, bluefin notho becomes a distinctive species for having a vibrant coloration and unique behavior. Among other species in the family, it is the aquarist’s favorite because it looks and behaves well in the tank.

Nothobranchius rachovii is largely and particularly found in Tanzania where other new species also live.

The species may inhabit a small or larger area but these are commonly hard to reach for humans. The unique coloration might have come from the isolated-scattered territory in their natural habitats.

While it isn’t the only species that form coloration from that condition, we are glad about the result. As a member of killifish, bluefin notho comes with vibrant coloring variations that differ them from comparable species.

While other species of notho killifish may come in a shade of colorations, it has an absolute distinctive appearance. That also explains why this species has become the favorite choice for home aquariums.

Nothobranchius rachovii live in shallow standing water conditions including in a bog, drain, or puddle.

These ponds would be filled with water during the wet seasons and inhabited by Nothobranchius fish. The temperature is somewhere around 20-24° C but higher up to 10° in the dry season.

They live in these ponds that have muddy substrates with acidic water with minimum mineral content.

Thesewould migrate to the deeper area before the rainy season ends and the ponds dry but not all of them can make it. Since the ponds are scattered throughout larger areas many migrating fish don’t even have a chance to leave the drying ponds.

Nothobranchius rachovii is the seasonal Killifish that lives in small waterways. They can survive extreme conditions in their natural habitat and would spawn and hatch eggs in the wet seasons.

The fry would grow and spawn in the next wet season which explains the cyclical nature of the killifish.

As the annual killifish, Nothobranchius rachovii can only live for one year so the cyclical breeding should be well-supported by the conditions or they’d become extinct in that particular environment. They can grow quickly and breed as soon as the season comes.

Male has a reflective body with bright iridescent colorations so you can see them in brighter to darker blue depending on your sight perspective.

The females can be identified to have duller brown with a yellowish tint with clear fins. Males have the same coloration on their bodies and fins making both sexes easily differentiated.

Nothobranchius rachovii can only grow up to 2.4 inches while the captive-bred specimens may have a shorter body length of 1.9 inches.

You can keep groups in a smaller tank with no problem. The actual size of the specimens may also be determined by the water conditions kept in the aquarium.

This is a peaceful killifish that can live in a community tank of similar-sized species. They’re better kept with species that live in similar nature and water conditions. The fish are quite active in the tank as they may live shorter than their tank mates.

It’s also important to learn their behavior when ready for spawning. You don’t want to miss the valuable opportunity in their life cycle or you’d end up with only dead fish in your tank. Overall, Nothobranchius rachovii has a decent behavior that even enhances the vibrant appearance that making it an appealing option for species or community tanks.

Nothobranchius rachovii is popular among aquarists due to its breeding challenges. The first attempts of breeding this killifish ended unsuccessfully and this particular task remains challenging even among today’s aquarists.

The breeding projects, even though tricky, have become the distinctive attraction to keep a Nothobranchius rachovii.

Since it is quite small and lives shorter than most species, you can use smaller tanks like 5-gallon or 10-gallon aquariums to keep ones.

Notho killifish can live in the tap water but slightly harder or acidic water would be okay from them. You won’t even face difficulties in breeding these with tap water.

Setting up species or community aquarium Nothobranchius rachovii is generally less hassle than other comparable species.

When determining the ideal tank for this killifish, you can consider 2-3 liters of water for one fish. If you want to keep six fish, a 5-gallon tank is enough but for larger ones allow them to swim more freely.

Even beginner aquarists can prepare a tank for Nothobranchius rachovii with no problems. A large tank isn’t necessary and even micro tanks would be okay as long as you pay attention to the water conditions.

You better set a smooth sailing water environment to keep these comfortable during their short living in the tank.

While they can adapt to a range of water conditions, setting up ideal water parameters would make your Nothobranchius rachovii happier. While the natural environment hosts a temperature of 16 to 32 °C, you keep the range of 20—23 °C for the tank temperature.

The lower temperature may cause male Nothobranchius rachovii to have duller coloration and appearance while hotter water may decrease their lifespan.

Keep the pH value of 6.0 to 7.5 and the water hardness somewhere between 5 and 20 dGH. To keep the water best quality, partial water changes and tank cleaning should be done regularly. However, you must prevent any extreme water changes.

Keep the subdued light by applying a low setup as well as floating plants like Java fern. Avoid the bright light setup or Nothobranchius rachovii would get stressed out, especially in the community tank.

Nothobranchius is ideally kept in groups of several females and one alpha male. While there are chances of conflict, there won’t likely be deadly fights. Keep the proportions of male and female 1:4 and you’re ready to go.

Without females, males can behave more peacefully. All those fights and quarrels are among the males that try to attract females. Still, you want males and females for breeding.

If you want to set up a community tank with rachovii. Consider some peaceful species including guppies, pygmy cory, and so forth. Since this killifish is a fin nipper, you better avoid long-finned fish as their tankmate.

Nothobranchius requires active feeding since this species has a considerably intense metabolism.

You can feed them live, frozen, or packed foods twice a day with small portions that they can finish within minutes. Don’t overfeed them because uneaten foods may contaminate the water and increase the chances of bacterial infection.

Feeding them with one large portion may also cause digestive and health problems.

Live foods are generally the best possible diet they can have including worms and brine shrimps. You can vary the diet with flake foods as supplements but they shouldn’t replace live foods as the main source of nutrients.

The breeding might sound challenging but you can successfully attempt ones with proper procedure. Rachovii would start laying eggs at the age of two months. What is challenging is to save the eggs and ensure they hatch into fry.

You’d need a 2-gallon spawning tank with a 1-cm thick substrate for laying eggs. Treat the water with antibacterial and keep the high moisture level. Keep the water slightly acidic with a pH value of no less than 6.5 and maintain hard water of 20 SGH to provide the best environment for breeding.

The breeding tank must contain no contamination components to promote better life chances for the eggs. The incubation time would depend on the temperature and humidity maintained in the tank. The egg evolution can take time from one month to one year and once hatched into fry, you can start feeding them with brine shrimp nauplii.