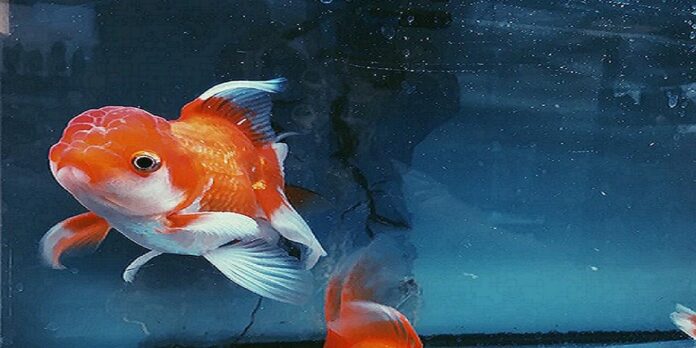 It has a peculiar raspberry growth on the top of its head, distinguishing it from standard goldfish.

Oranda goldfish (Carassius gibelio forma auratus) is a coldwater fish that belong to the Cyprinidae family. The fish is a product of crossbreeding between the lion head goldfish and the veiltail goldfish. Its peaceful behaviour and unique appearance make it popular among aquarists.

The oranda fish has many variations, and many people get confused, thinking they are different species. You can identify the species through the unique and exotic looking appearance. It can live for up to 15 years when kept in right tank conditions.

Oranda goldfish looks like an ordinary goldfish when young. At around 2 or 3 years, the fish develops a brain like a cap on the head similar to the lion-head goldfish. Over time, the hat known as the ‘wen’ grows so large that the fish can’t see.

And the surprising part is that you can trim the cap similar to a hair. The growth does not have any nerves, so it won’t hurt the fish when you cut it.

Body of the oranda fish is round and bubble-like similar to a goldfish. The fancy goldfish species is available in different colors including red, red with orange-yellowish spots, black, black with grey gradients, black with white dots, white, blue, and many other variations.

Dorsal fins are unpaired and big while the caudal fin is merged similar to intertwined silk threads. The fins are large while the scales are packed, forming attractive and visible patterns.

Probably the most charming part of the fish is the tail fin. The fins are of different shapes including fantail, ribbon tail, and broad tail.

Orandas behaviour is similar to a goldfish. They are peaceful creatures that go by the motto of ‘live and let live’. The fish gets along well with almost all other peaceful fishes. It is not a schooling fish but feels comfortable in an aquarium with other orandas.

Oranda goldfish are not fast swimmers, but they are active and lively fish. They spend most of the time in the aquarium digging and swimming. The fish swims all over the tank, including the top and the bottom. It does not hide in caves or another hiding place since it is not a shy fish.

Oranadas are hardy fishes are scavengers that will spend a lot of time souring the bottom of the tank for food. They will also move light stuff around the tank.

Aquarium (Tank) Mates: Can Oranda Goldfish Live with Other Fish? 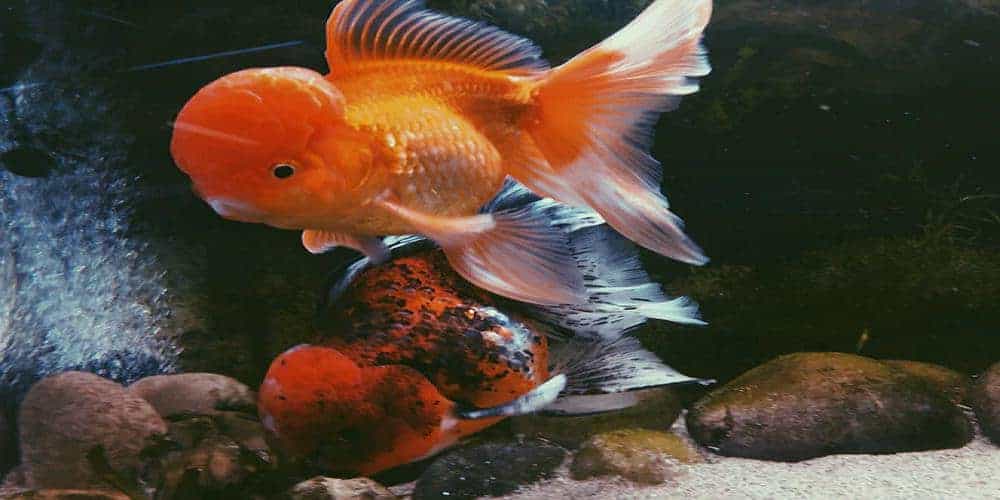 Oranda goldfish can be friendly with a lot of different fishes. The size and behavior of the fish should be considered when selecting a tank mate. It would help if you didn’t put small fish with orandas like neon tetra. Small fishes can get swallowed by the orandas.

You should select fishes that could survive in cold water conditions.

Fishes that you shouldn’t keep with your oranda goldfish include mollies, neon, bettas, cichlids, gouramis, and platies. These fishes may nip the fins of the goldfish traumatizing the fish.

You can also keep orandas in a shoal. Make sure that there is enough space for the fish to move freely inside the aquarium. The fish can get up to 12 inches so you will want to keep the shoals in a large when they grow up.

Oranda goldfish are coldwater fishes. Should keep the temperature between 65°F and 72.0°F (18.3 and 22.2° C). The fish is more adaptable when it comes to pH levels. It can survive slightly to highly alkaline waters with pH levels between 6 and 9. 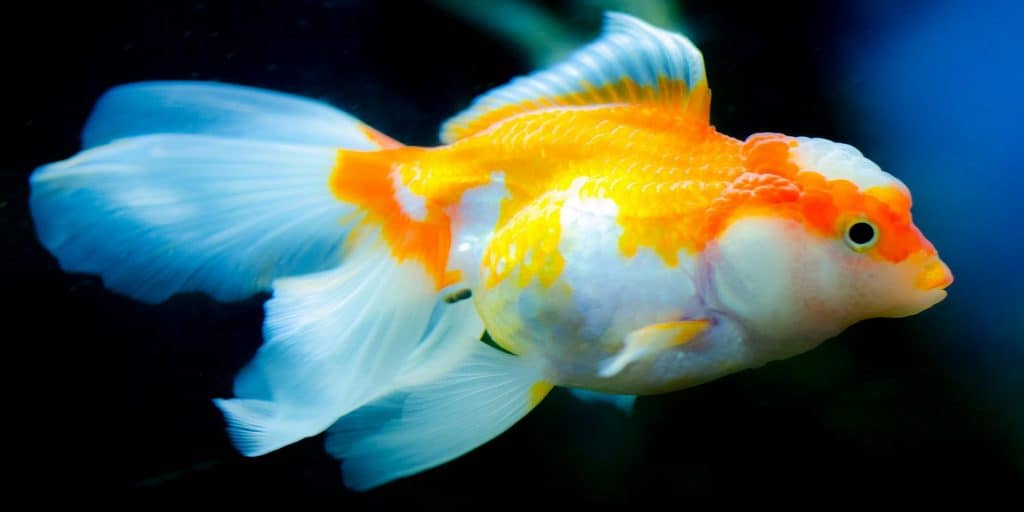 You should not select décor items with sharp edges. It is essential since orandas tend to dig at the bottom of the tank. Their fins might get damaged if there are décor items with jagged shapes. Avoid placing too many décor items in the aquarium to ensure that it has enough space to swim.

Place silk plants for the pet orandas in the aquarium. Also, it would help if you lined the aquarium’s bottom with medium-sized gravel. A moderate amount of plants are recommended.

You should select plants with small leaves. Suggested plants for the aquarium containing oranda goldfish include elodea and Vallisneria. Additionally, it would help if you considered keeping the lights on for 8 to 11 hours a day.

Oranda fish won’t get ill when we take care of them. Low water conditions can lead to different diseases. A common ailment among freshwater fish including oranda goldfish is the ich. The protozoan disease can prove fatal if not identified and treated.

A bacterial infection such as Dropsy is another dangerous disease. Other diseases that commonly affect oranda fish include Fish tuberculosis, Swim Bladder, Fin Rot, and Cloudy Eye.

Can prevent all the diseases if you carefully monitor the water parameters. Ensure that the fish is fed quality food, and there is enough space for the fish to swim around the aquarium. 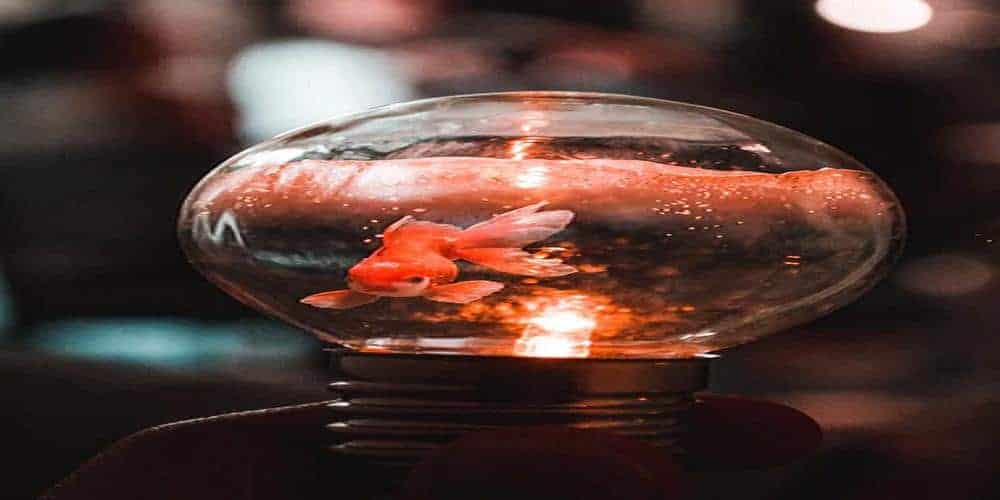 Oranda fish diet is similar to the diet of goldfish. The fish is omnivores that mostly eat small crustaceans, insects, and plants. The fish eat anything that fits inside the mouth. It will feed on both dry and live food. Make sure that you provide a variety of food items to the fish.

Combined foods are best for orandas. You can easily find them in most pet stores. The quality of the diet affects the color of the fish. If you feed the high-quality fish diet, the color will be brighter as well.

Note that orandas similar to any other fish tend to eat a lot. You need to limit the feeding sessions so that they don’t get obese. Consider feeding young oranda fish no more than two times in a day. Should provide adult just once a day.

It would help if you fed them with enough food that they can eat in about five minutes. Look for signs of overfeeding. If you see that the fish is swimming on the side, you need to feed less or skip the next session. It is essential as overfeeding can lead to health problems. It can even prove fatal for the fish.

You should also avoid underfeeding the fish. If you don’t feed the fish frequently, they will start digging for food scraps at the bottom of the aquarium. It also increases the chance that they will become ill.

Orandas can reach maturity when they are about two years old. It would help if you kept the pairs ready for breeding in a tank with 25 gallons of water. The tank should contain around substrate and plants.

Keep a female and some males in a separate aquarium and feed them live food. Males will chase the females around the tank in a playful manner. The behaviour will continue for several days, and the color of the fishes will intensify.

The Female will lay the eggs early in the morning. The spawning typically lasts for two to three hours. Once the eggs are laid and fertilized by the males, you should move the parents in a separate container. It is essential since the parents will eat the eggs.

The average incubation period of the oranda goldfish is about three days. It would help if you fed them infusoria or minute aquatic creatures like algae and other small invertebrates. Once the fry grows up, you should give them specialized food for goldfish that you can find in most online and local stores.

It would increase the temperature by about 350F (20C) each day up to 740F (230C). It would help feed the fish high protein feed during the spawning period, including worms and brine shrimp. Consider providing them with small portions three times a day.

Don’t overfeed as it will get the water dirty and make them passive due to which they won’t mate inside the tank. You should change about 20 per cent of the water every other day until the females lay the egg.

Fry will be dark black or brown color at the start. The color allows them to remain undetected to avoid being eaten by prey. They will gain the color of an adult oranda after several months. You can put the young fish in the aquarium once they grow to about an inch long.

How Big Oranda Goldfish get?

Orandas are relatively big fish in the aquarium. It can grow up to 12 inches under the right aquarium conditions. The largest oranda was a fish named Bruce from Hong Kong that was reported to be a whopping 15 inches! The fish can grow to a large size quickly. So, it would help if you kept them in a large tank.

An air pump is essential for an aquarium containing oranda goldfish. The fish love to eat a lot and produce waste.

It will dig up food from the substrate as well. It will make the aquarium dirty very quickly. If you don’t install the air pump, you may need to change the water every day.

A strong air pump will ensure that the water is properly oxygenated. Oxygen-rich water is critical for oranda goldfish. Lack of oxygen will cause the goldfish to suffocate and die.

Is Oranda Goldfish Suitable for Beginners?

Oranda goldfish care is not difficult. But keeping the right conditions can be challenging for a beginner. The fish is a coldwater fish. Moreover, the cap or wen of the fish needs to be properly trimmed. You can hurt or injure the fish if you are not careful when trimming the cap.

Orandas are sensitive to changes in water conditions. It can get an infection if the water is not cleaned regularly. Floating food debris can bet struck in the creases of the tail resulting in disease. Intermediate level care makes this fish suitable only for expert aquarists.

What Are the Popular Types of Oranda Goldfish?

Redcap orandas are highly popular among aquarists. The head of the fish isn’t fully covered or capped similar to other orandas. The cap cover covers the upper and top parts of the head.

Blue orandas are also known as Seibun or Seibungyo that is a variant of the oranda goldfish. The body is not exactly a blue color and gets mixed up with other colors. Only the fish cap is of pristine blue color ranging from dark blue to light greyish-blue color.

Black oranda goldfish are dark-coloured orandas. The fish seems like a different species due to the dark coloration. The cap covering the head is generally of a lighter shade than the rest of the body.

Where to Buy Oranda Goldfish?

You can find young oranda fish in pet stores. The fish is exotic and commands a higher price as compared to standard goldfish.

You may have to pay between $30 and $40 for a young oranda fish. Make sure that you buy healthy fish with no disease.

Consider keeping the newly bought fish in a separate aquarium. Monitor the fish to look for signs of diseases such as lazy movement, lack of appetite, or any unusual behaviour.

If the fish seems to be ill, you may need to take it to the vet. Always introduce healthy fish in your aquarium; otherwise, the unhealthy fish can spread the disease.

Wrapping it All Up: Are Oranda Goldfish Ideal for Your

Oranda goldfish are bright, vivid fish with an attractive personality. The fish has an elegant and graceful tail fin. It has a peaceful temperament and can get along with most other similar sized fishes. Professional aquarists will have an easy time taking care of the fish.

Oranda goldfish care is not that challenging. It can thrive in different water conditions. Unlike other fishes, the goldfish won’t die or become ill if the tank has become a little dirty.

Still, it would help if you regularly cleaned the tank to ensure that they remain happy and healthy inside the aquarium. The fish is cute and charming and can live for years under ideal conditions.