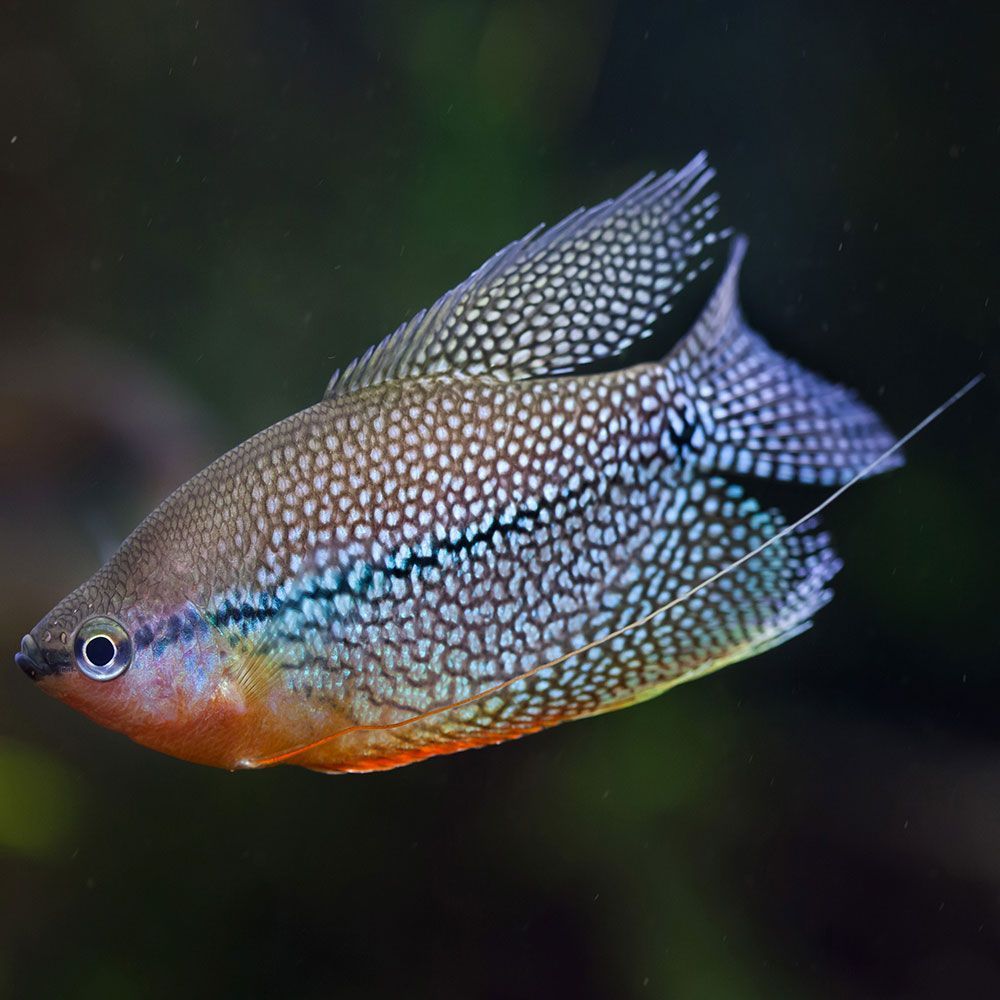 Pearl gouramis are prized for their dazzling looks and peaceful demeanor, making them a must-have for experienced aquarists.

They have reasonably advanced care requirements, making them a little challenging for beginners who are new to fishkeeping. But once you get their list of equipment down, you can quickly look after them.

This care guide lays you the complete lowdown on making sure owning one is a walk in the park.

Pearl gourami (Trichopodus Leerii) are a non-aggressive species that do well in heavily planted freshwater tanks. They come from a diverse group of gourami species, which comprise the Osphronemidae family.

Other names for these species include mosaic gourami and lace. Their natural habitats are low-lying swamps with acidic water, commonly found in different parts of Malaysia, Indonesia, and Thailand.

While these waters have low pH values, they can thrive in a wide range of aquarium levels. One notable feature is an organ known as a labyrinth that allows them to breathe outside air, meaning they will survive in fish tanks without much oxygen.

This quality makes them the ideal choice for beginners. They’re tough as nails, look dazzling, and get along well with other species. Let’s explore more about them in this care guide.

Their distinctive appearance will hold your attention for hours on end as you admire those vivid patterns and oddly shaped fins.

Pearl gouramis get their name from the white dots sprinkled throughout their bodies, covering the dorsal and caudal fins.

The only place you won’t see these dots is on the underside of their mouth, which extends down to the belly.

These pearl-like dots look alive when the fish swim around, and if you look at just the right angles, you’ll notice a glittering effect.

Another desirable feature is a horizontal black stripe that starts from their mouth, runs down the middle of the body, and ends where the caudal fin begins.

The depth of darkness varies on how the rest fish is colored, but the lines are always easily visible.

Pearl gouramis have flat, thin bodies that are long and tall. In pet stores and aquariums, they will only reach a maximum of five inches in size.

They are a sexually dimorphic species, which means males and females have various appearances. Males are more colorful and more prominent in size than females.

Their throats develop a brilliant orange or red color that becomes bright during the mating season. Specialists believe that the throat allows males to attract females. Furthermore, males have longer, more pointed dorsal fins than females.

Pearl gouramis are known for reaching a maximum length of 5 inches. Males will be typically larger than females and sport a more colorful appearance. Just because the average size is small doesn’t mean you can get away with a small tank. You need a large enough tank that is at least 30 gallons or more (if you plan on breeding).

Pearl gouramis exhibit similar behaviors to other gourami species. While they’re mostly passive, they have known for becoming aggressive during the breeding season.

Males will fight over females and try to scare off any fish that comes near their nest. They have a mellow temperament 90% of the time. It allows them to get along with all kinds of aquatic species.

They enjoy surfacing now and then to breathe in outside air thanks to the labyrinth organ. Because of this behavior, these will spend most of their time occupying the upper levels of the Aquarium.

Pearl gouramis are a passive species and hang out with most freshwater fish without getting too territorial or aggressive. They can survive in a wide range of water conditions, giving you greater control over tank mates.

They are shoaling fish, which means they prefer to swim in groups of their own. It is why expert aquarists recommend having a few of these fish, if possible, to lower their stress levels, not to mention the fact that a group of them will look even more stunning.

Pro Tip: You should keep more females than males to prevent aggression from males.

There are two things to keep in mind when selecting tank mates: i) the size of the fish and ii) the temperament of the fish.

A significant size difference between two fish will cause the smaller one to be stressed out and feel unsafe. As a result, your Pearl gourami will spend most of its time hiding in-between plants and decorations. It becomes all the more complicated since they like to head up to the surface and breathe in air.

The second thing to keep in mind is aggression. Any fish species that have hostile tendencies will not make a good tank mate.

Here is a list of ideal Pearl gourami tank mates:

In the wild, Pearl gouramis occupy slow-moving streams in rivers, lakes, and lowland swamps. These habitats share certain qualities that are ideal for gourami.

They live in shallow waters with dense vegetation for shade from the sun and protection from predators, for starters. It allows the gourami to move around the water and reach for the surface quickly.

Your goal should be to mimic their natural habitat, which isn’t that difficult. The tank should be at least 30 gallons, especially if you want to keep a small group of them.

They are a freshwater species, so the water needs to be kept at about 78 to 80° Fahrenheit. The water’s hardness levels should not exceed 15dH. You may need to buy a heater to regulate the temperature. Install a digital thermometer at an appreciably considerable distance away from the heater to record accurate readings.

There are a few things you should add to the Aquarium. I am starting with plants. Pearl gourami originate from rivers that are rich in dense vegetation. You can find plenty of options, including Hornwort, Java Fern, and Java Moss.

Rocks are an easy and affordable way to make the tank look more authentic. Alternatively, you could add driftwood and logs to the tank if it has enough space.

You will also need to filter the tank to provide clean water. Some aquarists add aid pumps to oxygenate and circulate the water. It isn’t required because they prefer slow-moving waters and will get their oxygen from the air.

Pearl gourami are omnivorous species, which means they’ll eat just about anything. Their diet will play a role in their behaviors and growth. In the wild, they’ve been observed to eat larvae, eggs, algae, and small insects.

They can also thrive on a source of plants. They will eat most fish foods that you can easily purchase from pet stores, such as frozen foods, flakes, live foods, and pellets. Just make sure the food is small enough to fit in their mouths.

Live food is suitable for their health because it brings out their basic hunting instincts since the Pearl gourami has to work for their food.

Examples of live food include glass worms and brine shrimp. You can also add leftover vegetables from your pantry. Cut them into small pieces to make it easier for the fish to eat.

Feed your fish at least 2 to 3 a day. Careful not to overfeed them; otherwise, it will overwhelm their digestive systems and disrupt the tank’s environment.

Feed them enough food that you can eat in a few minutes. Once they’re done eating, remove any leftover food from the Aquarium to prevent it from decaying and ruining the water’s quality.

Pearl gourami fish are susceptible to parasitic and bacterial infections, diseases arising from aquatic contamination or unhygienic conditions, and sickness due to an imbalance of pH in the water (too acidic or too alkaline). Here is our round-up of the most common diseases that typically affect them.

It affects moist freshwater fish species. The Peal gourami will develop cloudy patches on their skin. In some cases, you’ll notice discolored blotches under their scales. Dark blotches are a sign of infections caused by water contaminations.

Fish flukes are parasitic flatworms that invade the fish’s body, gradually draining it of all the nutrients from its body, making the host weak and pale. In the case of fish flukes, the Pearl gourami will often rub against the surface of the tank and other hard surfaces, develop mucus over its gills and lose its color.

Ich is often caused by freshwater protozoa and is one of the most common diseases. It appears as grain-like spots on the skin and will show up as other signs of ill-health, such as loss of appetite, hiding in the bottom of the tank, rapid respiration, and the formation of dermal nodules.

If you notice Ich disease, it’s time to act fast because the infection will affect other freshwater fish as well. Remove the affected fish from the main tank and quarantine it in a separate tank until it recovers.

Pearl gourami are foam nest builders. Males will blow bubbles to court females; these bubbles float to the water’s surface. They coat the bubbles in saliva to increase their durability and provide a safe place for females to deposit their eggs. In the wild, they deposit these bubbles in shallow waters to prevent predators from reaching the eggs.

Breeding pairs should be fed live shrimp or worms for conditioning. You should also add lots of floating plants in the tank to help them add more bubble nests. A breeding pair will display an attractive mating dance in which the male will try to lure the female. The mating process is repeated several times until the female has completed laying her eggs.

Once the mating process is complete, Will Release the fertilized eggs into the bubble next. The male will spend the rest guarding these eggs against other fish looking to eat them.

After 24 to 48 hours, the eggs hatch, and the fry gains the ability to swim at five days old. Fry does not have a fully developed labyrinth organ to breathe in the air and will depend on their gills for oxygen intake.

It makes it particularly important to maintain a high-quality tank and supply enough dissolved oxygen to keep the fry healthy.

Use the following tips to initiate spawning:

Pearl gourami can purchase from most pet stores, online stores, and internet forums. They are slightly more expensive than most freshwater fish species and will typically fetch a price of about $7 per fish.

Pearl gourami are attractive, resistant, and low-maintenance. It’s easy to breed them and increase their population. Their colors and patterns will add lots of flair to your tank and should be easy to look after by anyone who has kept fish in the pat.

Just make sure to add lots of vegetation to mimic their natural habitat. You have many choices when it comes to adding tank mates. Just make sure they are small enough and passive; however, do not add species known or nipping fins.