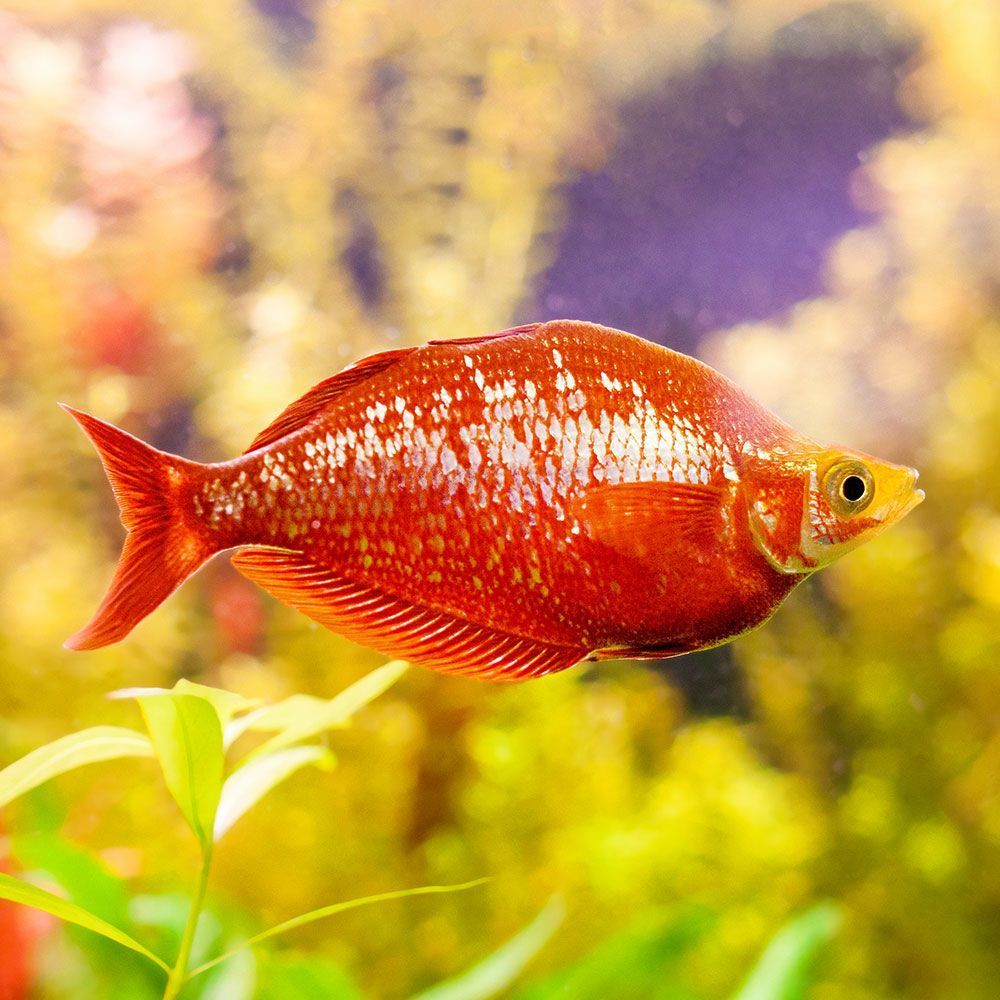 Rainbowfish has been the most colorful option in the aquarium trade. With an extensive range of species, you can always find ones that can brighten up your tank. Red Rainbowfish is undoubtedly one of the top names on the list for your aquarium.

Red Rainbowfish is one of the most popular rainbowfish that charms people with its bright reds.

It’s a tremendous aquarium attraction when kept in the shoal while they’re also easy to care for. This strong and hardy species can thrive and get along with other species well in a community tank.

Glossolepis Incisus or Red Rainbowfish is a tropical freshwater species native to Lake Sentani in Indonesia.

Red rainbowfish are native species to Lake Sentani Indonesia even though they’re also found in Papua New Guinea and Australia.

You can find them mostly in the swamps, lakes, rivers, and streams. Their population in wildlife is threatened by introducing invasive species and hazardous human activities.

These into the aquarium thread. Aquarists finally breed this fish and the breeding itself becomes commercial, especially in Southeast Asia and Florida.

Don’t worry about endangering the wildlife populations since the one you’ve purchased from certified breeders are captivity-bred.

Red rainbowfish can grow up to 6 inches which makes them one of the largest rainbowfish species.

Males typically have a slim, rounded body with silver scales scattered to it. The blood-red through the body and fins is the sign of a healthy adult male. Males have pointed heads with large black eyes.

Females share similar shapes except that they have brownish coloration with those gray fins. At this point, sexting them would be no problem.

You can identify male fish with more developed higher back and red colorations. The red shade in the male’s body is determined by multiple factors including water conditions, diet, mood, and age.

Red rainbowfish is a peaceful species that live in shoal for protection. That’s why they‘re largely found in the natural environment with dense vegetation.

As a peaceful fish, you can keep them with similar size and temperament species. Their behavior may change when the spawning time comes when they may chase each other but with no harm caused.

Red rainbowfish is a shoaling species that lives in groups so you must not keep it singly. On the other hand, they would have a more intense color when kept in shoals. In the tank environment, they may swim around the mid and upper levels most of the time.

You can find them venturing the open areas or hiding in the plants you’ve set up.  Even though they may rarely venture into the substrate, they’d go to the bottom for the scavenged foods.

Red rainbowfish can live up to 8 years with proper care in captivity.

Lake Sentani in Western New Guinea is the native environment of Red rainbowfish that you can resemble in the tank.

In this lake, you can find them in the shallower areas with dense vegetation or currents as they hide and shelter from predators and larger fish.

They are tropical species that lives in warm water. You better condition your tank to resemble their natural habitat to keep their health and well-being.

Red rainbowfish would appreciate areas with dense vegetation so you can add live plants even though it’s a species or friendly community tank. However, they may nibble the plants when shoaling so harder or sturdier plants are more recommended.

You can set up the robust plantation on the sides of the tank but leave the open swimming area in the middle. You can replicate the Lake Sentani environment by decorating the interior with bogwood and rock.

Even though these are an adaptable species you need to keep ideal water parameters so they can live longer and healthier. You must keep the warmer temperature at 70 – 79 F while the pH value ranges from 6.5 -8.5. Set the water hardness at a range of 8 -25 dG.

Despite investing in a heater to keep the water temperature warm, you need to use a robust filtration system. They require considerably fast water movement so you need powerful powerheads to follow the tank size. Keep the moderate bright lighting.

Red rainbowfish can grow up to six inches but you should keep them in a shoal of 4-6 fish in the tank.  On the other hand, these could be very active and need more space to venture and shoal.  A 30-gallon aquarium is certainly a very minimum tank size but it’s more ideal to use a 60-gallon tank.

Despite a robust filtration system, you must do regular water changes. You can either do a 10% water change per week or 25% every two weeks. If you have a larger tank to take care of, you can use a commercial water changer, gravel cleaner, and water conditioner.

Tank maintenance and water treatment are very important to keep the best water environment. These would keep the nitrate, nitrite, and ammonia at the lowest level possible to prevent bacteria and infections.

Red rainbowfish has a lot of potential tank mates you can choose from. This fish can thrive well in a species or community tank with other species.

You can keep them with species of similar size and peaceful temperament. Avoid any aggressive species that would likely bully red rainbow fish.

Other rainbowfish species like Turquoise, Madagascar & Celebes are excellent tank mate choices. Not only that they share many similarities but these species would also be a vibrant coloration showcase in your tank.

You can keep them with other species too like shrimps, snails, or invertebrates. However, it’s the best move to always research further about the compatible species and tank mates.

You must keep them in groups of five or size. You better mix male and female fish to bring out the vibrant color of your tank. They’re very sociable species that keep in the larger shoals so you must not keep them singly.

Red rainbowfish are omnivorous freshwater fish that eat any food that fits into the mouth. In their natural habitat, they may eat plants and insects. They’re not picky on foods but a varied diet should be promoted.

They may take everything you put in the tank. You can use flakes, pellets, granules, or other dried foods as a staple. However, you’d need to supplement the diet with nutritious live and/or frozen foods like brine shrimps and blood worms.

As previously mentioned, their coloration can depend on their food. You must only use high-quality foods to ensure health and to showcase their best color. Reversely, unhealthy fish usually show duller coloration.

You can feed them twice a day with a portion they complete within 2-3 minutes. Overfeeding can overwork their digestive system and leave uneaten foods decaying then contaminating the water. You can always balance their diet with greens or vegetables.

Red rainbowfish are quite easy to breed in the tank with less intervention as long as you can maintain the best environment for spawning. What you need to do is decorate the breeding tank with leaved live plants.

You need to condition the tank by keeping the water temperature at around 79 F and changing the water partially. A separate spawning tank is highly recommended but you need to treat it first before introducing them.

You can choose the healthiest and fattest pair to occupy the spawning tank. Spawning may take several weeks to complete where the egg scatterers lay some eggs per day in the plant, substrate, or other surfaces. Within eight days, the eggs would hatch.

Feed your newborns with infusoria for the first seven days. Once they get larger and start swimming freely, you can feed them with brine shrimp nauplii. Since they’re sensitive to changes in water conditions, monitor your water quality closely to prevent the fry from an early death.

If you’re not sure about your first time breeding red rainbowfish, you can research the details further. Consult with the breeder from who you buy your fish and tank mates.

Red Rainbowfish is a member of active rainbowfish so you can expect them to be venturing tanks while scavenging foods in the bottom throughout time.

Their shoaling behavior could have been the major attraction if you decide to keep them in your tank.