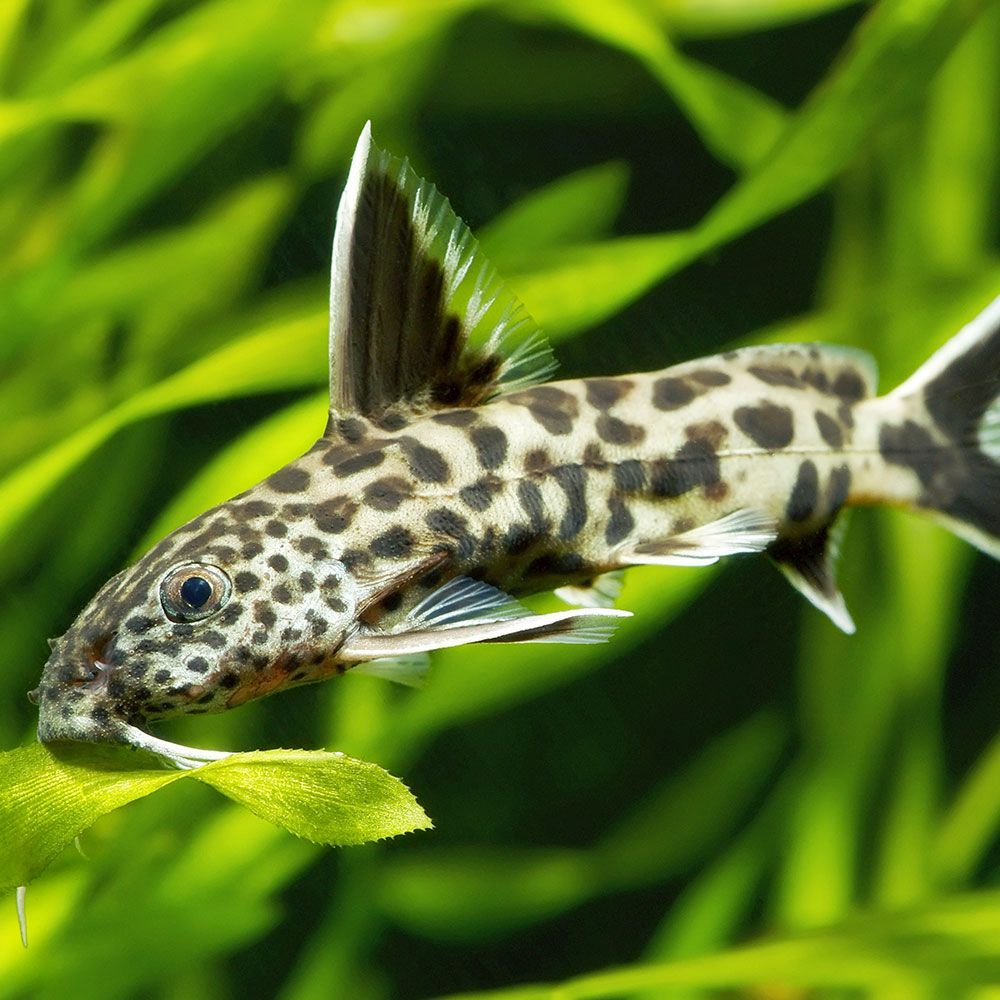 Having catfish in the community tank isn’t only for functional reasons but these species have become amazing and even the primary attraction of the tank.

Dwarf Petricola Catfish is undoubtedly an appealing catfish that grows in smaller sizes and fits a smaller tank. It has a bold appearance and outstanding behavior when kept in transparent captivity.

Synodontis lucipinnis is a small catfish popular in the aquaria industry. Indigenous to Africa, these offer anything you can expect from catfish that originated in the region. You can keep, breed, and set a community tank with them.

Synodontis lucipinnis is exclusively found at Musende Rocks, Zambian Lake Tanganyika. It has a smaller size than the famous cuckoo catfish or Synodontis multipunctatus. They’re frequently misunderstood as the same species.

Synodontis lucipinnis comes from the second deepest and second oldest lake around the globe, Lake Tanganyika.

The 420-mile-long river crosses different countries including Zambia, Malawi, Burundi, Tanzania, Rwanda, and Congo. It hosts the greatest freshwater volume in one place that constitutes up to 16 percent of the world’s freshwater stock.

Synodontis comes into the aquarium along with thousands of Tangayika’s native species.

Formerly a local food source, these fish are consistently imported to States, European countries, and other regions for aquaria. Resembling the natural freshwater environment is the best practice to keep the catfish.

Synodontis have copper-brown or yellowish bodies with iridescent coloration that get covered with black spots.

Lucipinnis have similar looks to other African mochokid catfish except they’re simply smaller. You can generally identify mature females with their fuller bodies than common males but sexing specimens you’ve bought from breeders could be a daunting task.

The best chance of sexting is by using a venting method but you may need to contact a professional to do that.

The bottom-dweller has a low mouth to grind and suction up foods scavenged in the bottom substrate.

They have broader eyes situated in the back section of their head that supports peripheral vision and are adapted for low light. They can locate foods or landscapes by touch that’s supported by three sets of barbells.

While it shares similar shapes, patterns, and even coloration with some other catfish, Synodontis lucipinnis also has a size of 4 inches while fish from Synodontis family typically reach 12 inches in length when kept in the aquarium.

The larger tank typically allows them to grow longer but they’re considerably smaller than other fish.

Synodontis is a bottom-dweller that lives in large schools. They have a peaceful temperament and can adapt to diverse water conditions, aquarium composition, size, bottom type, etc. They can get along with other tank mates with no problems.

Synodontis require considerably easy care but a good tank setup would make them happier in a species or community aquarium.  Considering their size, a 20-gallon tank would work but a larger tank is more recommended to allow them to grow longer and dwell more freely.

A well-decorated tank is preferable for Synodontis lucipinnis even though it is not mandatory.

Ensure that you provide the bottom with quality gravel or sand and also place some pieces of driftwood or other fixtures.

These would allow algae to grow in the tank that every one of them would love to nibble on.

It’s very important to resemble the water conditions of the natural habitat as much as possible. For the aquaria environment,  Synodontis lucipinnis prefer cleaner water in a community tank.

You can double the filtration to keep up with the bio-load in the aquarium. The system would also deliver proper oxygenation and streams needed by them.

You can use the robust external filtration system if you keep the fish with digger species as they would expose and nibble on the underground filters.

Keep the pH values at 7.5 to 8.5 and add crushed coral to the grave to maintain the hardness of the water.  If possible, maintain it at 4-5 dH while keeping the temperature within a range of  72 – 82 F for the best water conditions.

Even though Synodontis lucipinnis can live in a 20-gallon tank, a larger aquarium is advisable especially if you keep the fish in groups. You can use a 50-gallon aquarium to keep 8-10 catfish or as a community tank. Larger tanks help reduce potential inter-species conflicts and keep the water cleaner.

You can also install structures, rocks, caves, crevices, or other fixtures more flexibly for them to hide. The moonlight setup is better to encourage them to come out from their hiding place and make their coloration more appealing.

Synodontis lucipinnis can be aggressive towards the same species but they can live peacefully with other species. Most African Rift Lake species could be great tank mates for this catfish. However, the tank mate selection must take several factors into account including behavior, diet, water condition, etc.

Some tank mates can be great for Synodontis lucipinnis including:

Use a larger aquarium for community tanks and always avoid the fin nippers.

Synodontis lucipinnis isn’t picky on their foods and they would typically take anything that fits into their mouth.

In Tanganyika, they eat insects, snails,  small mollusks, vegetation, and any foods scattered in the bottom. In an aquarium, you can feed them with flakes, frozen foods, or pellets with no problems.

A varied diet is highly advisable if you keep them in the tank. Despite meaty foods, you can simply feed them with garden vegetables, cucumber, squash, etc. Keep them well-fed but avoid overfeeding them since leftover foods would reduce the water quality.

When you keep these in the community tank, then you must take other inhabitants into account when planning to feed. Generally speaking, two-time feeding is preferable to a singly, large portion even though your bottom dwellers may scavenge foods throughout time.

Synodontis lucipinnis is a parasite breeder that requires host parents for their fry. Breeding this catfish can be very difficult as even professional breeders hardly obtain them as beautiful as the wild-imported species.

A breeding or community tank must have mouthbrooding cichlids that can host their eggs. Some cichlids we’ve mentioned above are good candidates for host parents. That’s why the tankmate selection is very important if you’re keeping Synodontis lucipinnis with the vision of breeding.

Synodontis lucipinnis may target spawning cichlids as the hosting parents. Your catfish would be triggered to spawn when the cichlids are spawning. Females would gobble their eggs so that spawning female cichlids can take them along with them. The cichlids would brood their eggs and the catfish eggs without realizing they were not theirs.

After three days, you can remove the host brooder so they can release fry. You can start feeding them with micro brine shrimp until they’re large enough to be moved into the community tank.