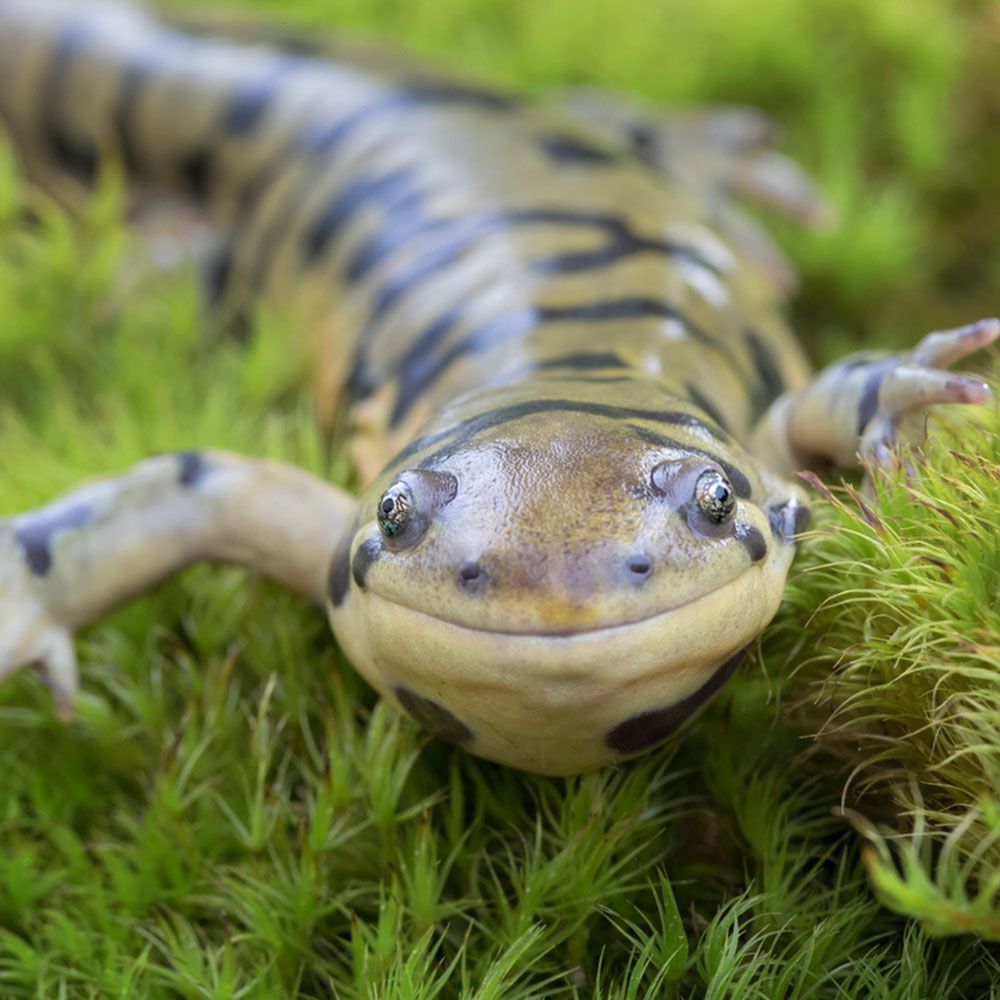 The group of salamanders has a bunch of surprises to mesmerize us. The Tiger Salamander is one of them.

With their tiger-like body print, they look pretty different from other salamander specimens. So, to know more about this exotic species of salamander, have a look at this article.

The Tiger Salamander is unique as an amphibian due to its tiger-like appearance. They are native to North America, where they live near ponds and wetlands. However, this species mostly prefers to burrow themselves under the ground to avoid excessive heat.

Tiger Salamanders (Scientific name: Ambystoma Tigrinum) are a species of mole salamanders. Also, they are one of the largest terrestrial groups of salamanders native to North America. They belong to the Ambystomatidae family and look unique with their tiger-like appearance.

In the United States, Salamanders are pretty easy to find along the Atlantic coast in the South of New York and Florida. However, the majority of Salamanders are found in the center of the country. Their presence can thus also be seen in Arizona, Ohio, Montana, and Kentucky.

Salamanders typically prefer to live by the side of vernal pools, slow-moving streams, and ponds. One of their unique traits is that they are quite tricky to spot due to their secretive nature. Most of the time, they prefer to stay buried underground.

They usually spend most of the year below the surface, as they prefer to escape higher temperatures. However, after heavy rain, you can find them strolling on and enjoying the wet ground.

They typically have a base color with a greenish or greyish tone. The markings on their body can come in the form of yellow dots or brown splotches. However, some of them have no markings at all.

The Tiger Salamander is an amphibian with a thicker body that comes with a short snout and sturdy legs. Moreover, they have long tails that perfectly complement their body.

salamanders usually grow up to 14-inches in length. However, their average size varies up to a length of 6-8 inches. Thus, they are known to be the largest land-dwelling salamanders on Earth.

Unless they meet any threat, they tend to live longer. Salamanders are usually long-lived. They have an average life span of 10-16 years in the wild.

Aquatic adult Salamanders can live up to 25 years in captivity if offered a good source of food and care.

Adults prefer to stay underground most of the time. However, there’s also another fun fact about them; they can dig their burrow, unlike other amphibians that use the burrows of others.

They are usually found more than 60 cm below the surface to escape the land temperature, especially when the heat is extreme on the surface.

Tiger Salamanders In the Wild

Their population is relatively healthy throughout their range. However, pollution, deforestation, and increased acidic levels in their breeding area are affecting their distribution.

They often tend to cross roadways, which makes them get hit and run over by cars. They usually cross the roads during spring en route to and from their breeding sites.

Tiger Salamanders have a pretty stable population. However, the loss of wetlands can be one of the greatest threats they face.

This salamander species mainly grows its population around a vernal pool. They lay their eggs in the pool as they are free from fish that eats away their eggs and larvae.

Now, as wetlands get filled in and destroyed, Tiger need to search for a new suitable breeding site.

Tiger can also become a feast to others. Wild animals like snakes, bobcats, owls, and badgers tend to eat them away. Besides, many insects, other species of salamanders, and snakes are a predatory threat to Tiger Salamanders’ larvae.

Role in the Ecosystem

Tiger Salamanders usually play the role of an effective predator in their subterranean and aquatic environment. As a result, they tend to prey upon some insect pests.

Similar to their other salamander cousins, Tiger prefer to have a carnivorous diet. Their source of nutrition includes worms, insects, snails, and slugs in their wild habitat. In captivity, they can be fed other smaller salamanders, baby mice, frogs, baby snakes, etc.

The larvae of Tiger tend to feed upon small crustaceans and insects’ larvae at their initial stage. Then, as they grow, they tend to consume tadpoles and smaller larvae of salamanders. They also happily eat small fish.

Tiger Salamanders usually migrate to their breeding ponds during the late winter or in the early spring. They especially become active for breeding as a warm rain takes place that thaws down the ground’s surface.

Male specimens arrive earlier than females. Probably, the males live close to the ponds during the time of winter, which makes them turn up early.

Upon their arrival, their courtship takes place during the nighttime. The males nudge and bump the female Tiger Salamanders. As a male comes across a female one, it will nudge her with its snout to get her away from others.

After getting the female away from other males, the salamander will reach out to her chin while leading her forward. Then, it will nudge its tail in her vent area.

It will help stimulate the male to release its spermatophores. Meanwhile, the female Tiger Salamanders move their body to ensure that the spermatophore comes in contact with their vent area, further allowing them to take the sperm in their cloaca.

As long as the courtship continues, it will help the males produce more spermatophores. One of the most interesting facts about this species is that they have immense competition in breeding. Sometimes, other males may tend to interrupt a pair and replace the spermatophore with its own.

However, once the breeding is completed, the laying of eggs takes place at night, after 24-48 hours of the courtship.

The females usually lay their eggs on decaying plants available on the bottom floor of the pond. Each of the lay can include 100 eggs. Per breeding season, each female can lay egg masses anywhere between 100-1000.

The eggs of Tiger Salamanders are laid in smaller pools. It hatches within a short time of 19-20 days. The larvae remain in the pool until they become full adults within 2.5-5 months of age.

Sometimes, Tiger Salamander prefers to stay in their aquatic larval form for the rest of their lives.

Do you want to pet a salamander at your place? Then, the Tiger Salamander can be an excellent choice for you.

Unlike other species of salamanders, Tiger Salamanders are quite hardy as a pet. They are not that weak. Instead, they can easily overcome the fear of humans.

They often try to follow the movement of their owner from inside their enclosure, which is their unique way of interacting with humans.

However, the care for these salamanders may not be as easier as it sounds. You need to handle them with utmost care as they have very delicate skin.

Besides, Tiger Salamanders are not much aggressive. They also do not require the company of their type while living in a tank. However, they might tend to consume other Tiger Salamanders in case there is no food nearby.

So, if you are keeping them together in a tank with their types, make sure to offer them enough food.

Tiger salamanders are much more susceptible to various respiratory infections. Different symptoms include wheezing and secretion of mucus around their mouth and nose.

Such health problems can result from improper temperature rise or the enhancement of moisture levels in their environment.

If they become sluggish or tend to lose weight in captivity, you must take them to the vet immediately to figure out the reason for their sickness.

The group of salamanders is considered one of the most versatile families among amphibians, where you can find a vast range of species. The Tiger Salamander is one such exotic variety, which is hard to find in the aquarium trade.

Well, if you are thinking of keeping them in your tank, consider gaining more knowledge on them by doing the appropriate research. In case you have prior experience in fish-keeping, you can easily go for Tiger Salamanders.