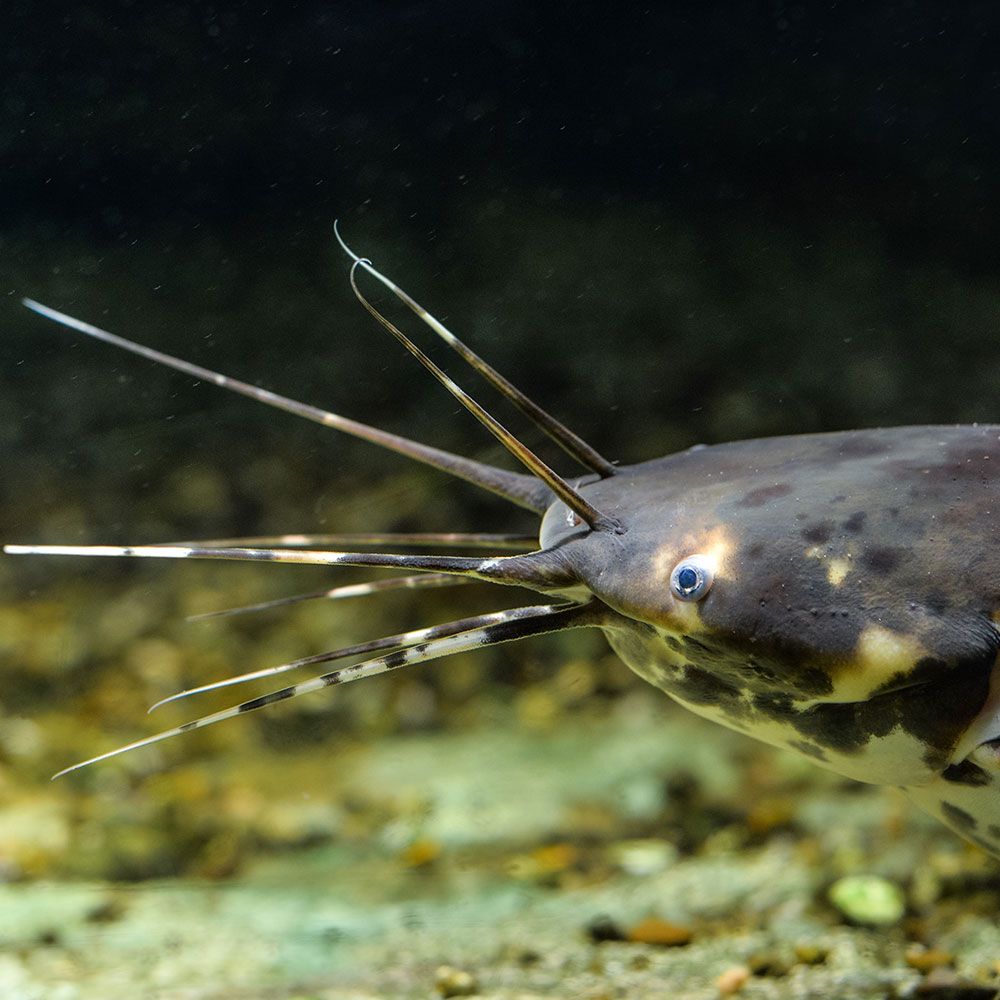 Have you ever seen catfish move on the land to cross a significant distance? Maybe not! But they are one of the widely observed fish that have a remarkable ability to move on land with their special structure and unique behavior.

Walking catfish (Clarias Batrachus) are native to Southeast Asia and possess a distinct brown color. They can be dangerous at times with their deadly stings. They can also live for long over water and travel up to 1.2 km on land. These omnivorous species are widely used in the commercial fish marketing trade.

Freshwater catfish never fail to charm us with their typical behavior and unique anatomy. The walking catfish is one of those widely known freshwater species. They are typically native to Southeast Asia.

They are blessed with the ability to wiggle over dry land in search of food.

However, these do not usually move like other bipeds or quadrupeds. They use their pectoral fins to keep their motion upright, which renders them an effective movement on the land. They are typically found slowly moving in stagnant waters or ponds and flooded areas.

Within Asia, this species is widely popular. But outside this native area, they are considered an invasive species.

Walking catfish tend to consume food supplies of native fish and prey on their young ones. Also, they are known as invasive due to their ability to destroy fish farms.

They usually have an elongated body shape. Their length reaches up to 0.5 meters. Besides, the appearance of this fish species is quite distinctive, with small white spots all over their body on a greyish or brownish base color.

They have scaleless skin covered with mucus to protect them while staying outside water.

Walking catfish are widely known as tropical freshwater fish species. They are native to Southeast Asia. These types of catfish are commonly found in countries like India and Bangladesh. Also, they are widely spread across the Sumatra, Thai-Malay Peninsula, and Borneo Island.

They usually prefer to thrive in stagnant cold water, which is hypoxic. Hence, they are often found in muddy water bodies like canals, ponds, ditches, and other similar aquatic environments.

Walking catfish are usually omnivorous by nature. They eat almost everything.

They typically prefer to have smaller fish and mollusks in their diet. Also, they gobble up other invertebrates, insects, worms, etc., in their wild habitat.

Some of these feed upon aquatic weeds and detritus. They are active eaters and turn voracious when they get a continuous supply of food. Thus, these are considered harmful when they act like invasive species.

Do these walk on land?

Definitely yes, these can walk on land. It is something very interesting about them. They move out of the water body and travel to another place to find food.

Also, when they do not feel good in the current water body, they might decide to move to another place searching for a suitable living space. Whatever the reason may be for their movement, they can swiftly wiggle across the land.

Walking catfish use their pectoral fins to propel forward. You can find a similar snake-like movement in their motion, which helps them flutter across the land areas. They are primarily seen walking during wet weather conditions such as rainy days or on flooded land.

How far can they walk on the land?

They can make remarkable progress on dry land. As already said before, they use their pectoral fin spines as the anchoring agent, which prevents them from jackknifing, thereby helping them to move forward.

These can effectively cover up to 1.2 kilometers on the land while surviving for a long day above the water.

How long do these live out of water?

Usually, these can live for a minimum of 15-18 hours on the ground while staying out of water.

Do they have gills?

Similar to all other fish, these also have gills. Their gills have a much-specialized structure, which allows them to breathe underwater.

The gills are usually a flap of tissues that contain capillaries. These blood vessels allow oxygen to get transferred in and out of their body.

As they swim, water passes through their gills and comes in contact with the capillaries. It pulls oxygen from the water and transfers it to their blood system.

However, their gills only work in the water. If their gills do not come across any fluid to keep them upright, then the thin tissue present in the gills can collapse.

Nevertheless, walking catfish have hollow cavities in their gills, comprising air-breathing organs that help them breathe even outside the water.

Though walking catfish are not much deadly, they can be marked as dangerous sometimes. Such a weird nature, right! However, these invasive species can be a bit difficult to handle while caring for them.

These are invaders of aquaculture farms. They tend to eat a large amount of fish stock. Thus, fish farmers in Florida use fences or build levees to keep them away.

Besides, they carry a disease called enteric septicemia, which can infect other farmed catfish. And that’s why fishermen or drivers of the truck transporting brood fish keep them apart from other fish.

In the context of Florida, though these fish do not have any report regarding the total impact on native species, walking catfish are pretty pervasive in south Florida. Also, many scientists consider them as one of the most harmful introductions to North America.

They can be deadly and devastating in the pools of wetlands during the dry season. They can quickly become a dominating species in such areas. They have been reported to affect other catfish and native centrarchids.

Why is walking catfish bad?

Well, do you know what sets them apart from other fish? These have stings near their heads, which work as their unique protective ability.

By using these sharp-pointed organs, they can put some native species at risk, especially the natural predators who strive on fish, such as herons, egrets, and wading birds. Thus, preying on walking catfish can be highly dangerous.

How many eggs does a walking catfish lay?

Interestingly, walking catfish can lay a handsome number of eggs if they receive proper care and optimum water conditions. They usually spawn several times during the breeding season and give rise to innumerable offspring.

If a walking catfish mates for the first time, it will probably lay up to 100 eggs. Usually, they keep laying eggs with a few hours of gap between each session. In the next interval of laying,  they can lay up to 500 or more eggs.

The rule of thumb is that they will lay an average of 200 eggs per mating. They usually have four matings per hour. So, with proper amounts of gaps between each laying, a female can lay up to a maximum of 5000 eggs.

Walking catfish are undoubtedly one of the unique species, which are abundantly available and often seen walking. Though they are invasive species, they are widely popular in the commercial trade among tropical fish dealers.