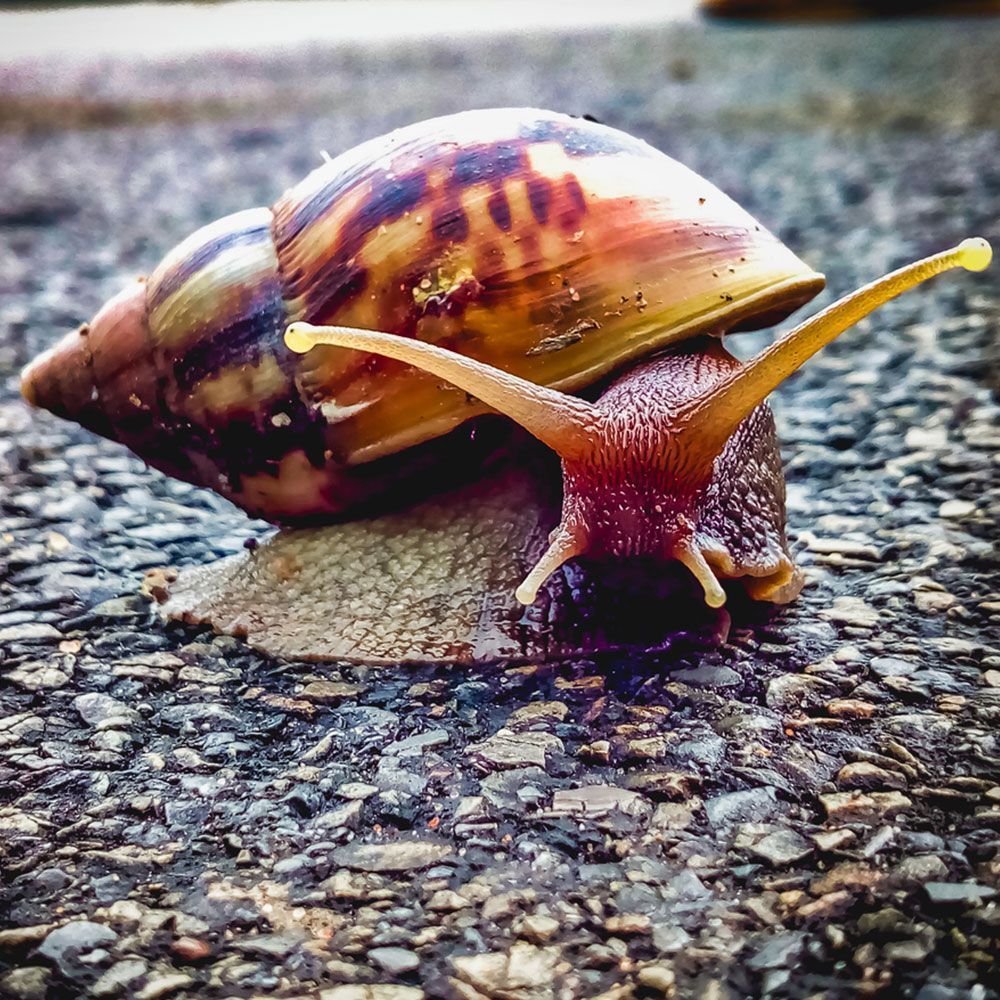 Snails are one of the best species to keep your aquarium clean.

You can add these slow-moving creatures to both freshwater and saltwater aquariums. They will help maintain the aquarium by eating dead matter and algae inside the aquarium.

A popular question you might be thinking to yourself is what do snails eat.

What Do Snails Eat in The Ocean & Diet in The Aquarium?

According to studies, snails can eat almost everything edible. They can be herbivores, carnivores, detritivores and omnivores, depending on the species.

In this guide, you will learn about what to feed them. You will also learn about the diet of various species recommended for both freshwater and saltwater aquariums.

Nerite snails belong to the Neritidae family, which consists of more than 200 species.

They live near brackish waters.

Some live in freshwater streams and rivers.

You can keep them in both saltwater and freshwater aquariums.

These will grow up to a size of 1 inch if appropriately fed.

Below is the list of some of the most popular types:

What do Nerite Snails Eat?

The different types of nerite snails have various appearances but similar feeding requirements. The primary food source in the aquarium is algae. You can also feed them other items if algae growth is not adequate inside the tank.

A good substitute for algae inside the aquarium is algae wafers. The wafers will remain at the bottom of the tank until the snail completely devours them.

You can also feed them green vegetables from the kitchen, such as lettuce and spinach.

You should feed them wafers and vegetables only if there is no algae growth inside the aquarium.

Also known as spike-topped apple snails, they are native to rivers and streams of Brazil, Paraguay, Bolivia, and Peru.

You can find them in different colors and varieties.

Ivory mystery snails have an off-white and creamy color body and foot with orange spots at the mouth and head.

These are great community snails that you can keep with other fish in the aquarium or pond.

They don’t multiply as quickly as some other snail species.

Golden Inca mystery snails have a creamy white head and body and traces of striking gold and deep yellow color. They also have orange-colored dots over the head and mouth.

These will be a great addition to an aquarium because of their beautiful color and unique patterns on their body.

You can keep them with other non-aggressive fish.

They have a peaceful and calm temperament similar to most snails. These thrive in a freshwater aquatic environment.

An intriguing thing about mystery snails is that their eyes can regrow. The eyestalk does not have any sensory organ. As a result, the eyes will regrow after a few weeks if damaged.

They can live for about a year inside the aquarium under the right conditions.

You can keep them in reef aquariums as they don’t eat coral reefs.

These can grow up to a size of one to two inches under the right conditions.

What do Mystery Snails Eat?

These snails will actively seek out food all day and all night. They are omnivores and eat a variety of food.

Their diet consists of dead, rotting plants in the wild. They also graze on algae growing on sand and rocks.

They are scavengers that eat leftover, decaying food and plant matter.

These are proficient algae eaters and do an excellent job of cleaning the aquarium.

Mystery snails in the aquarium will eat algae that grow on glass, rocks, and sand. They keep the aquarium glass, stones, and decorative items inside the tank clean.

They have a radula that they use to scrape algae from the surface.

They will too eat plant leaves such as the Amazon Sword, Anubias Barteri, and Banana plant tubers.

If there is not much algae growth inside the aquarium, you should feed them vegetables like zucchini and lettuce. Wash the vegetables before feeding them to avoid chemical poisoning.

You can also add supplements to keep them healthy.

You can try different vegetables to find out the type of food they like.

You should also feed calcium-rich food.

Japanese trapdoor snails (Cipangopaludina japonica) are named after their operculum, which is a calcareous trapdoor-like structure on the shell.

The operculum helps these avoid predators and also survive without water for long periods. They also have a rough plate on the shell that forms a firm seal at the edges, protecting the snail.

The shells are spiral-shaped.

A fascinating thing is that every Japanese trapdoor snail is unique. They have varied appearances with different designs, patterns, and colors.

What do Japanese Trapdoor Snails Eat?

It would help if you fed the Japanese trapdoor snails a variety of vegetables. They love to eat fresh vegetables like blanched spinach and zucchini.

These are also fond of food rich in calcium. Consider feeding them feeder tablets and pellets to enrich their diets.

Assassin snails (Clea Helena) are freshwater species that have an aggressive side. They attack and eat other snails, which is why they are called assassins.

These are native to Southeast Asia, particularly Malaysia, Thailand, and Sumatra in Indonesia.

Aquarists keep them in the tank to maintain control over the population of other snails. They are carnivores and don’t eat plant matter.

Aquarists mostly keep one or two assassins inside the tank.

The lifespan of these is about three years.

They generally grow up to a size of about 1.25 inches. Life and length depend on the type of food they eat and food availability inside the tank.

Assassin snails will not disturb plants inside the aquarium. They will also ignore algae, unlike others.

What do Assassin Snails Eat?

As mentioned before, these eat other snails, which most popularly include the Ramshorn and Trumpet snails.

They will also eat shrimp fry and snail eggs. They don’t eat their eggs. If you keep these with other fish, they will eat dead fish as well.

You should not have to feed anything if there are lots of snails inside the aquarium.

If you want to keep these solely in the aquarium, you should consider providing them with brine shrimp.

You can also vary the diet by feeding them pellets, flakes, and algae wafers.

They are some of the more giant snails out there and live in various areas, including Southwest Asia, North and South America.

They are said to originate from the Amazon River and have spread to other regions. In North America, they are found in Hawaii, Florida, and Southwest Asia.

Most aquarists keep them due to their attractive appearance.

These reach an average size of about 6 inches.

What do Apple Snails Eat?

Apple snails are omnivores that feed on different types of food.

You should feed them vegetables, pellets, insects, brine shrimp, and dead fish. They will also eat algae and other microscopic vegetation that grows on the rocks and tank walls.

It would help if you kept the lid on the aquarium tank.

These will climb out of the tank seeking food outside of the aquarium.

Malaysian Trumpet snails (Melanoides tuberculata) are also known as the red-rimmed Melania. They have a unique appearance with reddish spots that contrasts strikingly with the greenish-brown shell.

You can find Malaysian Trumpet for sale in most online pet stores in great numbers.

These have a large appetite that makes them the ultimate scavengers and cleaners.

In the wild, Malaysian Trumpet snails live in freshwater rivers and streams in Asia and Africa.

These have a life span of about two years and grow to about 2.5 centimeters.

You can recognize them by their long pointed shells that look like ice-cream cones.

What to Feed Malaysian Trumpet Snails?

Malaysian trumpet snails can be fed pellets. You should stop the filter and drop the pellets on the substrate.

They will emerge from the substrate and eat the pellets.

These require supplemental feeding if there is a large population with no or tiny food debris inside the tank.

They can go along with shrimp, fish, and other snails. They are a hardy species that can increase in the right aquarium conditions.

They are avid cleaners of the aquarium. They will feed on soft algae, dead plant matter, and uneaten food matter.

These have rubber-like bodies that allow them to move and bend over thin leaves quickly and onerous surfaces inside the aquarium.

What do Ramshorn Snails Eat?

Ramshorn snails are highly active and will move around inside the tank both during the day and night.

They are detritivores and eat things that most other snails avoid. They will eat almost any organic and nonliving matter, including dead fish, dead leaves, fish waste, fallen pellets, and flakes.

These will also eat delicate plants, algae, decaying plants, and fish matter. They also enjoy eating leaves of stem plants like the anacharis and cambomba.

Once a Ramshorn snail finds a food source, other snails will congregate in the area. They will continue eating until the food is finished.

You can also feed them blanched vegetables such as cauliflower that will keep the shell healthy and robust. We can also provide them with soft fruits and vegetables like squash and cucumbers.

If the aquarium has a large snail population, you can place the vegetables on a piece of straw and then remove the straw once they have eaten the vegetables.

Black devil snails (Faunus ater) are native to islands in the western part of the Indo-Pacific region.

These have a dark and unique appearance, due to which they are known as black devil snails. They have a deep black glossy shell.

They can grow to a size of up to three inches.

You can keep the black devil snails with other peaceful fish and snails. They are solitary creatures that tend to spend time alone eating algae inside the tank.

What do Black Devil Snails Eat?

Black devil snails are not fussy eaters. These are omnivores that eat algae, dead, and decaying matter. But you should not expect them to clean the entire tank.

You should also provide calcium supplements to ensure that their shells remain healthy.

Can You Put Snails with Shrimps?

Shrimps like Amano and Ghost shrimps will not eat snails.

Aquarists have witnessed that shrimps hunt and eat fry snails and fish. So, if you prefer breeding them, you should not keep both of them in the same tank.

You can also keep shrimps in a large tank with lots of plants. Amano shrimp won’t eat fry if there is more space in the tank. They will be content with eating algae and plants.

Do Snails Eat Shrimps and Fish in Aquarium?

They eat whatever they find inside the aquarium.

They are known to eat injured shrimps and fish. However, these will not eat live seafood.

Some like the Assassin snails also eat fry and young fish.

It would be best if you did not keep them in a tank used for breeding purposes. Fry that comes near them will get eaten

It would help if you remembered that they are not picky eaters.

Aquarium snails are not picky eaters. Most of them will eat a lot of different food items. You will not have any difficulty in feeding them.

If there is an adequate algae population inside the tank, you may not have to feed them anything.

Typical snail food you can provide to supplement their diet includes pellets, flakes, and algae wafers.

Remember that overfeeding and underfeeding are not recommended. It would help if you were careful about how much you feed.

The amount you should provide depends on the size and the number in the tank.

You should follow the tips mentioned in this guide about what water snails eat to ensure that they remain healthy and well-fed.