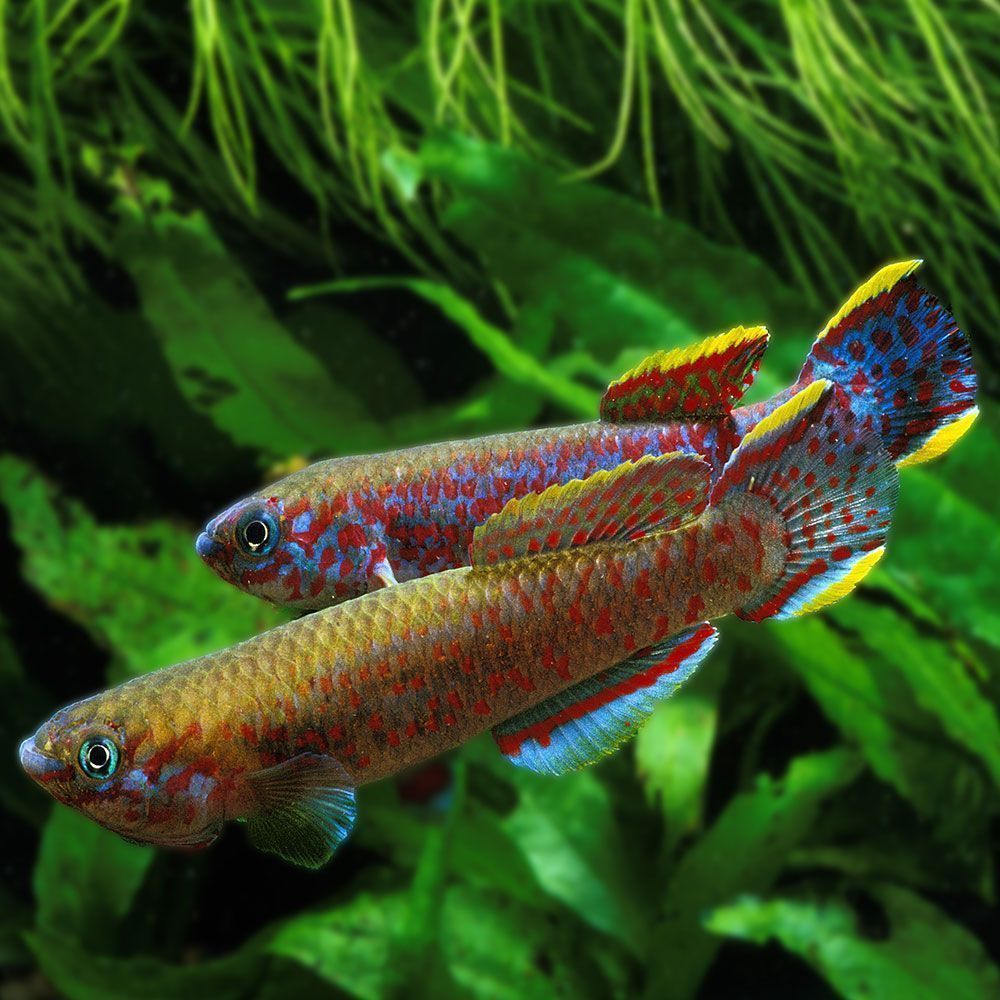 Killifish are an underrated species that aren’t readily available in local pet stores, but they are among the most beautiful freshwater aquarium fish you’ll find.

They belong to the Cyprinodontidae family, making them distant relatives of the platies, guppies, and swordtails. Killifish are ideal pets to take care of if you’re a beginner.

If you’re new to fishkeeping, it is recommended to start with a single male to understand its specific care requirements better.

The term ‘killi’ may give the impression that killifish are dangerous, but that isn’t the case. These derived the name from the Dutch word, “Killy”, meaning ditch.

The vividly colored killifish are diverse fish with over 1200 species, including the stunning clown killifish and golden wonder killifish.

They are a hardy species that have adapted to thrive in a wide range of habitats and can be found in almost all world locations, except for Antarctica and Australia.

Their preferred habitat is under shallow tropical and subtropical waters.

Most species are mostly freshwater fish, but some species thrive in brackish water and saltwater.

They are found in both moving and still waters. At a natural lifespan of only a few months, the killifish doesn’t live very long in the wild.

Smaller species like the Hummingbird Lampeye and the Dwarf Madoka will attain a length of one inch only.

Larger species like the Orestias cuvieri will reach a span of about 11 inches.

Their appearance varies depending on the subspecies. Almost all killifish have bright and vivid color patterns, displaying strong sexual dimorphism in terms of appearance.

The males are brighter and more ornamented than the females. Most of them have a slender, pike-shaped body and flatheads at the top.

The unique shape of their body allows them to swim more efficiently than other species.

Some killifish species have long and broad fins, while others have shorter, more rounded fins with cylindrically shaped bodies.

For the most part, killifish are known for their peaceful temperament and laid-back behavior in a community of multiple species.

It makes them extremely compatible with peaceful tropical fish species like the neon tetra. It is worth noting that males can be aggressive towards one another if placed in the same tank.

If you plan on keeping more than one male in the same tank, make sure the aquarium has plenty of hideouts where one of them can seek refuge from their bullies.

Females are not known for being aggressive, so you can keep several of them together as long as there’s enough room in the tank.

Caution: Some killifish are known for getting a little too excited and jumping out of the water. It can be deadly if you don’t have a tank lid in place, so watch out.

If you’ve got the smaller species, they can slither out of small gaps and catch you by surprise.

In this section, we’ll go over the tank requirements for killifish. Try not to deviate too far from the general guidelines if you want to provide them with a good quality of life.

They can live in a range of climates, temperatures, and habitats, making them exceptionally hardy.

It would help if you didn’t face any difficulty mimicking their natural habitat in the tank settings. The size of the tank ultimately depends on the number of killifish you’re keeping and your reasons for adopting them.

Due to their small size, a single killifish can live in a 10-gallon tank. But if you’re opting for the larger species, you’ll have to adjust the tank’s size accordingly.

Most of them prefer to live in long, narrow aquariums with little to no water movement. The ideal tank should contain lots of greenery, liven plants, and floating plants.

Use water plants that thrive in lower light conditions, such as java moss and cryptocoryne.

You can keep the tank bare on the floor, but some owners are known for covering it with dark gravel. Make sure the gravel does not harden the water.

Note: Avoid gravel if you want fish to spawn in your tank. Instead, use peat moss that doesn’t contain fertilizer products and other harmful additives. Provide more significant caves, wood, and rocks for your killifish to visit when they feel like it.

Most killies thrive at a temperature of between 72 to 76°. Use an aquarium heater to regulate the temperature if you live in colder climates.

However, if you own multiple aquariums, it may be much more efficient to heat the whole room.

The pH valance of the tank depends entirely on the species of fish that inhabit it because every one of them has its preferences.

Some species come from tricky alkaline waters, and others come from soft acid waters. For the most part, they need a water hardness of around 125 to 160 parts per million (ppm). Some species, like the Nothobranchius, will thrive better in softer water.

In terms of lighting, make sure the tank doesn’t have bright lights because these are used to hiding from direct sunlight. Most of them are used to low or no water movement at all.

Pro Tip: Smaller killies are easier to manage than larger species because the waste will quickly build up, requiring the owner to clean up after the fish frequently.

A balanced freshwater aquarium will require a filter to break down toxins, chemicals, and other organics.

Most fish keepers prefer to use filter wool or a simple filter sponge with a box filter. You might want to use under-gravel filters for larger tanks.

Most killifish are meat-eaters, and in their natural habitats, their diet involves eating worms, larvae, insects, and crustaceans.

However, some species are known for eating algae. Make sure you can provide live food, don’t toss flake food and call it a day! If you’re facing a hard time procuring live food, then this species is not for you.

An ideal diet for adults includes the following:

Killies will also eat the following types of foods:

Pro Tip: Never put your killies on a diet of exclusively one type of food, even if the food is a healthy one.

Many aquarists prepare their fish food to ensure a proper balance of nutrition for their killifish.

If you go down this route, make sure to monitor their diet if you plan on breeding them closely.

If you have newly hatched killies in your aquarium, try feeding them on a diet of vinegar eels, brine shrimp, grindal worms, and infusoria.

If you give live food, they will quickly reach sexual maturity at only two months old.

Seeing a killifish grow into a mature adult is a rewarding experience. It’s effortless to breed adults if you want to witness the process from start to finish.

If you want to breed them, follow these steps:

As a general rule, the blue, red, yellow, and green killifish are males. The females have a dull color. It is all you need to know if you plan on breeding them.

Now place one of the vibrant killifish in an aquarium full of females.

The male will quickly start attracting the females by displaying their colors. Interested mates will respond by following the male to the breeding area. The pair will dig into the peat moss and lay their eggs.

Killifish are known for quickly mating with other killifish. Females aim to lay as many eggs as possible and will try to mate with multiple partners.

To speed up the breeding process, try to create a specially prepared breeding area, such as a small enclosure where spawning can take place.

This way, the fertilized eggs can be reared and collected under improved conditions through natural and artificial processes.

If you don’t provide a breeding space for your killifish, they will lay their eggs at the bottom of the aquarium in the gravel.

It is recommended to create a separate breeding area; here’s what you’ll need:

One convenient solution is to use a plastic tub. You can get one quickly from a local store near you.

Make sure to buy one with a lid. Can purchase the peat moss from a local market or nursery. Make sure you’re buying ‘peat moss’ instead of simple peat.

Cut a small hole in the lid, no more than a few centimeters. The hole should have a max radius of about 2.5 cm.

As a general rule, the hole should allow the fish to quickly get in and out without getting hurt in the process. Now take some peat moss and sterilize it by bringing it to a boil. It will kill any bacteria or toxins that could harm the eggs.

Before placing it into the plastic tub, let the peat moss reach room temperature. You could run it under cool water to speed up the process.

The peat moss you prepared will be ideal for both types of fish. Once the breeding tank has been lined up with the peat moss, fill it up with water.

To restrict the spread of velvet in the bowl, add 2 tbsp of salt as a precautionary measure. Add a few heavy rocks to the bowl to tether it to the aquarium.

Caution: Before placing the bowl into the aquarium, make sure the peat moss is thoroughly soaked with water. Once you have prepared the bowl, gently place it in the aquarium.

Don’t worry if parts of the peat moss float out of the plastic box. That’s a common occurrence.

But once the killifish start getting in and out of the breeding space, expect a whole lot of mess. Make sure to clean the bowl once breeding is complete.

Once the eggs have been laid in their place, it’s time to incubate them. You will have to provide the right circumstances to hatch them.

The eggs may hatch as soon as two weeks or as long as eight weeks. Try to keep the temperature consistent around the eggs by covering the peat with a foam box. Should place the peat in a dimly lit area.

Once your eggs are ready to be hatched, they will resemble eyes. It is a significant indication that the eggs have reached full maturity.

If it’s been more than eight weeks, it could be too late. But you can continue to monitor the eggs to see if they’re ready to hatch. When this happens, do the following:

The young killifish will struggle to swim at first, but they’ll quickly adjust to life outside of the egg.

Once they’re ready to swim around, you can shift them to a separate bowl. You’ll have to look after the fry for three more weeks if you want them to survive the first few days of hatching.

As we mentioned initially, killifish is a little hard to come by and won’t be readily available in pet stores.

Stores that do stock them won’t have more than a few species. Most people get theirs from online stores, hobbyists, breeders, and at auctions.

Ensure your killifish are healthy before buying them. Your goal should be to buy the best one possible.

Try to see if their appearance matches the description of the species you want to buy. Most species share the same traits making it a little difficult to identify them in pet stores correctly.

It is crucial because each species has its tank requirements.

Killifish don’t have much in the way of special requirements. They are an ideal choice for you if you belong to one of the following groups:

Make sure to only pair the killifish with peaceful mates if you want to start a community of fish.