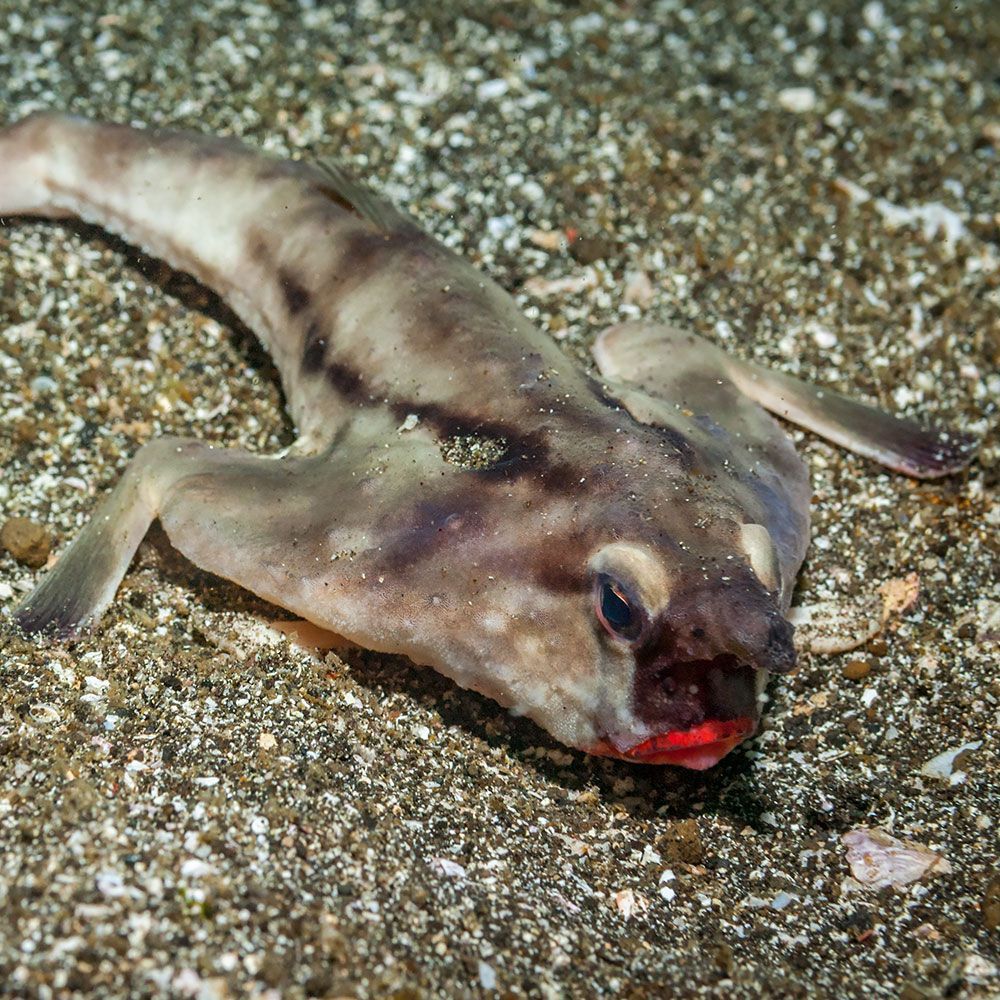 The world is full of mysteries.

Though we have grown up reading that, fish are a kind of species that move with tails and fins, we all must have come across the idea of fish with legs at least once in our lifetime. Isn’t it?

Well, this may sound like a fictional idea, but it is not. Yes, you got that right, there are some fish, which do have legs for walking. Bizarre truth!

Fish with legs is quite impossible to think of as it prevents them from swimming. However, there is evidence of 15 fish species that exhibit the act of walking with legs. Fish like mudfish, Garnai and Axolotls, and loaches have evolved leg-like limbs to move on land.

Well, though we are not so widely familiar with the concept of fish with legs, it is not a myth. Some fish have tiny legs, which makes them look different from others.

It is pretty usual for fish to have fins and tails. But some of them also develop arms and legs, which look weird yet funny.

Some of the fish, such as mudskippers, can travel a long way on the land. However, they choose to swim in the water.

Do you know what scientists have to say regarding this trait in fish? They believe that fish are the predecessors of land animals. For example, mudskippers have powerful front fins, which look like legs and are used for moving on land.

Mudskippers are amphibious fish that spends at least 90% of their time on the land. As a result, they have acquired a new way to move, breathe, and see on the land.

So, what keeps them moving like this? They have a shoulder joint, along with their pectoral fins, which helps them walk, swim, jump and even climb up on the trees.

You might have heard of one or two fish species having legs. But do you know there are at least 13 species of fish that once had or currently have walking abilities on the land?

Here are the names and images of those fish. Have a look!

This unique fish species grows up to 15 cm. They have a much extensible body with softer skin covered with dermal spinules. Their dorsal spine is modified to be used as a fishing rod, which also helps them walk.

This one is a kind of ray-finned euryhaline. They are the biggest species that belongs to the gar family.

This fish species is widely known as tana lungfish or African lungfish. Their pectoral and pelvic fins evolved to form 4 limb-like structures, which help them to walk on land and in mud.

Known as gombessa, they are a rare type of vertebrate, which have a closer resemblance with lungfish and tetrapods.

This spotted handfish is an unusual type of fish species that have adapted their pectoral fins as their hands. Thus, using them, these fish can walk on the floors of oceans.

This freshwater fish belongs to the polypteridae family and possess similar walking characteristics as tetrapods.

This long-tailed carpet shark has a large black spot in its pectoral fin. They can walk by wiggling their body and thrusting their paired fins.

These are usually 90 -130 cm long fish having large tetrapod-like heads. Their head is much flattened and narrow. They have an intracranial joint, which is quite common in lobe-fin fish.

This species lived 375 million years ago with similar features like tetrapods. These four-leg fish are the first ones to walk.

These species are an extinct order of the prehistoric ray-finned fish.

This is an extinct genus of the teleost fish, which used to live in both marine and freshwater ambiance.

This particular species lived during the middle to late Devonian era. Their fossils are found in various parts of the sediments in the marine world, which showcases their locomotory organs similar to tetrapods.

This species was available a long time ago but had limb-like legs for walking. They belonged to the Rhizodontidae family.

How many fish can walk on the land?

Recently, a team of U.S National Science Foundation-backed scientists has found that at least 11 species of fish can walk on land.

These recent findings are based on the CT scans and the latest evolutionary map of the hillstream loach family. It includes only one living fish species that are caught walking, known as the Cryptotora thamicola or cave angelfish.

Pointing out the fish species of the hillstream loaches with walking capabilities will help scientists understand how exactly the first land-walking vertebrates came into existence.

Depending on the shape of the bone, which connects the spine of the loaches with their pelvic fins, the team found 10 or more species of loaches having the heavy pelvic girdle of cave angelfish.

What was the first fish to walk on the land?

Do you know what is the first-ever fish that walked on the land? Well, the first fish to walk on the land is known as Tiktaalik. They lived approximately 375 million years ago.

These Tiktaaliks were usually a transition between non-tetrapod vertebrates, named Panderichthys, and early tetrapods like Acanthostega and Ichthyostega.

Which fish can fly, walk and swim?

There is only one fish that can fly, walk and swim simultaneously. It is the Garnai fish. They can walk on the land, fly in the air, and, at the same time, swim quickly in the water.

Can a Mexican walking fish live out of water?

Though Axolotls or Mexican walking fish are usually referred to as fish with legs and tails, they are basically a type of amphibian, more precisely a salamander variant. Growing up to a length of 12-inches, this creature comes with a cylindrical body with short legs and a long tail.

Another unique trait of their body is their feathery gill, which is located externally. This fish with legs has four toes in their front feet and five toes on their back feet.

These amphibians undoubtedly look cute, but they are not at all peaceful and easy to tame. They tend to show aggression towards one another. Most of the time, they intend to bite each other’s gills, feet, and tails. However, their body parts regenerate soon.

Since these animals are amphibians, their bodies and gills remain moist most of the time, which helps them breathe easily in the wild. Nevertheless, these species usually spend their entire life in the water during their larval stage, which makes them different from other amphibians.

How did fish get legs?

The history behind fish with legs dates back to 385 million years ago. Some of the aquatic species evolved as land mammals. Their fins slowly evolved into their new limbs.

A recent study has found that fish can see far better above the water. Also, fish get more tempted by the delicious prey on land.

So, their goal to get more prey in front of them might have worked as the reason behind their migration from their natural habitat of water to the land. To accomplish their task, they eventually evolved their limbs, which helps them to walk.

Why do fish have no legs?

Fish with legs is a bizarre idea for those who haven’t seen any yet. But a question that can often startle us is, why do fish have no legs?

Well, looking at the anatomy of a fish makes it easier to believe that their body doesn’t have a potential place to hold legs. Also, they don’t require legs.

There are hardly any fish that comes up to the land. Most of them cannot survive more than some moments on the land. They die due to a shortage of oxygen.

Usually, a fish needs to move faster in the water, and they get the momentum for that from their fins and tails. Moving with a leg in the dense water can slow them down, making them prey for other aquatic creatures.

Do you know what is the real reason behind fish having no legs?

Evolution, as usual! The evolution of feet prohibits the fish from having inefficient legs. They require an aerodynamic speed to move fast in the water. In case a fish develops legs due to some genetic defect, it will have a lesser pace than other usual types of fish.

Fins, on the other hand, help fish to propel their body forward. Thus, legs prevent them from having blazing speedy motion underwater.

Though fish with legs is a weird idea to imagine, they do exist in reality. There are many fish that have legs to execute their locomotion on the land. They differ in many ways from the usual fish and may not be cared for within a tank.

However, knowing about these mysterious creatures is undoubtedly exciting and enticing!