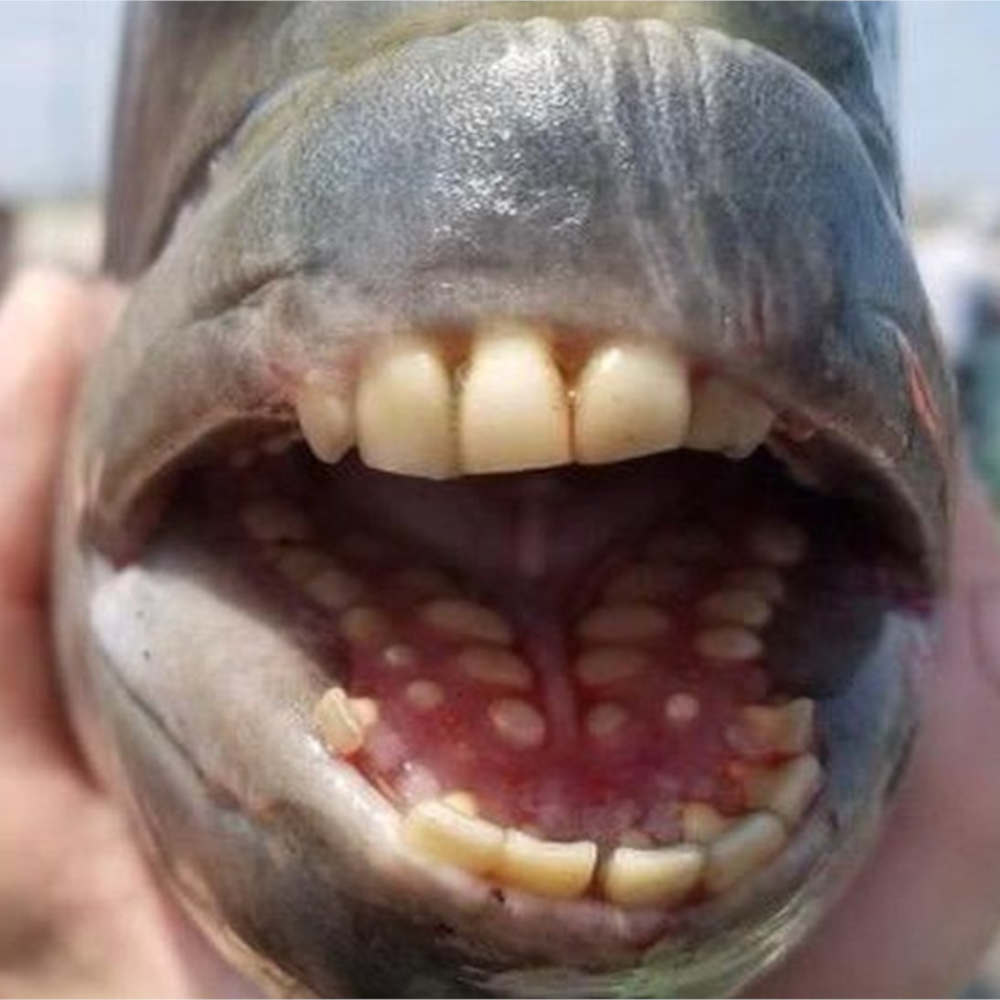 It may sound weird, but fish with teeth exist. In some species, the teeth are so big that you need to be extra careful while handling them.

Some of these fish live so deep in the sea and these are the depths you would never want to reach.

Let’s find out more about these creatures in this article.

Around the middle of 2020, social media erupted with fascination, after a Twitter user shared photos of a fish caught in Malaysia with a mouth quite similar to that of a human.

There are around 40 species of triggerfish known so far and, out of these, Picasso triggerfish has well-defined front teeth. This fish with big teeth lives in tropical or subtropical waters and feeds on worms, crabs and urchins.

The black piranha is a fish with teeth known for its ferocious reputation. This is because of its razor-sharp teeth and extraordinary jaws. The fish has very quick movements and if anyone comes close to this fish’s teeth, it can cause serious injuries.

Piranhas have sharp teeth because they shred their prey and scrape vegetable material from the lake bottom.

They are one of the most feared of all bony fish. Their teeth have edges and run all the way around their mouth and each tooth is tightly fitted to the next. When it closes the mouth, the top and bottom rows of teeth form a pair of sharp scissors.

A quick shake of the head and anything that enters it is unfortunate enough to lose its life.

Given its reputation, there’s no wonder people are afraid of this fish, but circumstances under which it may pose a threat to humans are very rare.

The sheepshead fish also known as archosargus probatocephalus is found along the areas of the eastern coastline of North America and South America. This fish can grow around 91 cm and weigh up to 21 pounds. The unique combination of teeth helps Sheepshead to eat a wide variety of food. Its diet consists of vertebrates, invertebrates and plants.

It is not clear why this fish is named Sheepshead, but it has been suggested because its teeth look like sheep’s teeth.

If you still wonder if it’s a fish with sharp teeth, check out this picture:

Lingcod is an ill-tempered omnivorous fish with a mouth like a messy silverware drawer. These fearsome fishes can grow up to five feet in length and weigh around 80 pounds.

They have over 500-plus haphazardly arranged teeth in their mouths, strong enough to crush almost anything. They are fierce predators and are the prized fighters in the world of the cold-water reef.

If there is one place in this world you don’t want to stick your finger, it’s the mouth of a lingcod.

The map pufferfish, also known as the scribbled puffer, is a dangerous fish. The fish contains a powerful neurotoxin in both skin and internal organs. Just one wrong move and you can find yourself in trouble.

However, the fish is shy and it’s tough to get close to it because it tends to hide when someone comes close.

They are territorial and have a powerful bite as their four teeth form a sharp beak.

It is a South American freshwater fish, found in most rivers in the Amazon and Orinoco river basins of lowland Amazonia. The fish is related to the meat-eating piranha because they both belong to the same subfamily, Serrasalminae. Pacu is omnivorous and has square, straight teeth that somehow resemble those of humans.

Pacu uses its sharp teeth to crush fruits, nuts, other fish and invertebrates. They usually feed on fruits and nuts that drop from the trees in the Amazon. They are not very aggressive but their crushing jaws can cause hazards.

Pacus can be bought in aquarium stores and are easy to care for. Many aquarists are not aware the fish can grow up to 4 feet tall, which is way too much for a typical home aquarium.

One of the craziest fish you will find in South America is Payara. It has a mysterious reputation because of its nicknames such as Water Wolf, Dracula fish, dogtooth characin and saber-toothed tiger fish.

It lives in the Amazon basin and has long, curved fangs that come out from its lower jaw. It likes an environment that has clear waters with a lot of currents and is often found in the churning rivers.

The good news is, though they look like something coming out of a horror movie, they won’t eat you. There have been no cases so far where payaras have attacked humans. They do defend themselves when they are caught while fishing and people often report cuts and bites, but they are not at all predatory towards humans under normal circumstances.

Payaras eat trout and shrimp and are not afraid to fight with big prey. They like to dart into a school of fish and use their fangs to stab, grab and hold them. They rip apart everything they eat.

It is a predatory fish found in the waters of large rivers and lakes in central Africa. They are thought to be one of the most dangerous freshwater big-toothed fish known in the world.

The fish has up to 32 razor-sharp teeth! The upper jaw contains 12-20 teeth and the lower jaw 8-14 teeth. The teeth are slightly conical in shape and can grow up to 1 inch in length.

Their teeth are of the same size as great white sharks. The fish is known to snap its prey in a half with just a single bite.

The jaw of the Goliath Tigerfish is double-hinged, which means, it can open its mouth a lot wider if compared to other fish. This is the reason that the big fish’s teeth point further forward when it comes closer to its prey and can easily take out the flesh chunks from its body.

Thanks to the needle-pointed teeth and an overall fearsome image, that gave Northern Pike all the hype. The fish has multiple rows of teeth (300-700) on the upper and the lower jaws that can grow up to 1 inch long. Their teeth are so strong that they can rip their prey apart in just a few seconds.

Most Northern pikes grow to be around 24-30 inches long and weigh between 3-7 pounds.

Stories related to Northern pikes attacking humans with their big fish teeth are very rare, though there can be minor cuts or wounds when anglers do not take proper care while unhooking them.

One thing worth knowing about this fish is that it may mistake a piece of jewelry for food and can attack it when hungry. Try not to wear any jewelry if you are in their territory, it can work as a potential bait.

Their fearsome-looking teeth are not just for the show, this fish is an aggressive hunter, and has the largest teeth of any marine species relative to its size. The fish is found 500-5000 meters below the surface in the deep salt oceans. The fangtooth has two middle fangs on its lower jaw that grow very long.

Being a big-toothed fish doesn’t mean it is not vulnerable to predation by bigger fish such as marlin or tuna.

For safety, they use their dark color to camouflage.

It is a marine fish with sharp teeth that belongs to the Anarhichadidae family that inhabits the east and west coasts of the Atlantic Ocean.

One of the notable features of the big-mouthed wolffish is its formidable set of teeth that makes it stand out from its family. Teeth are crammed into the whole mouth of the fish, and all jaws are occupied.

The front row has 6 fang-like teeth, the upper jaw consists of 3 rows of teeth and 4 molars. The lower jaw also contains molars.

These are the cunning fish that hail from the Gulf of Mexico and the North and Western Atlantic Ocean. They are about 16 cm in length, but despite their small size, they are very scary. Thanks to their transparent fang-like teeth. The teeth help them grab and tear their prey apart within a fraction of the time.

The good news is, you are likely not to come across them because they live 1500 meters below the surface.

Bluefish teeth are small, but conical in shape with knife-like edges, while their tips are very sharp. Though it’s a popular game fish on the northeast coast, it’s dangerous if it comes close to your body. They are extremely aggressive and anglers often worry about handling them safely.

They can cause severe bites and can even hurt unsuspecting swimmers.

While they are not as well known as piranhas, their knife-like edgy teeth are sufficient for tearing through baitfish. Due to their aggressive nature, they have earned names like piranha of the sea, choppers and snappers.

These are some fish that have teeth. We will talk about other fish like these in our coming articles.