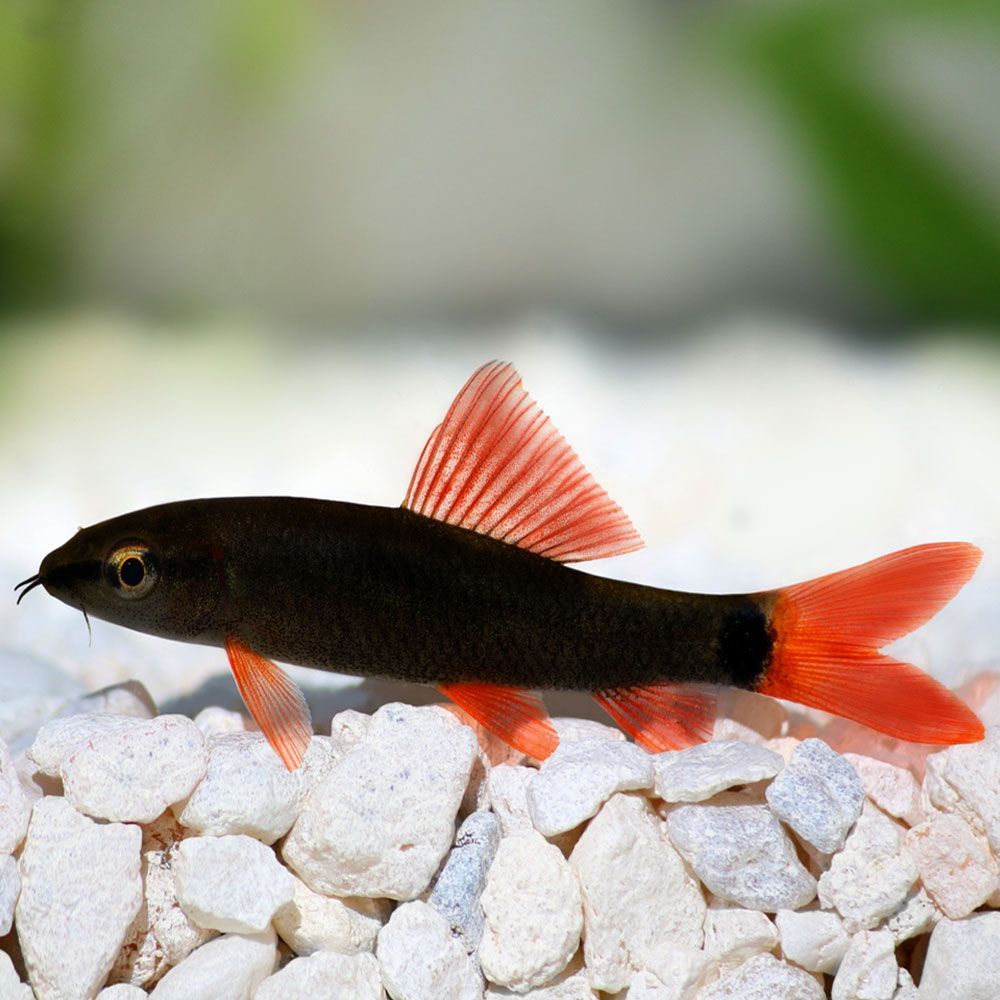 Contrary to their name, Rainbow Sharks are not actual sharks but are so named after the shape of their fins and body, which bears an uncanny resemblance to large ocean sharks.

Although they’re a common sight in most home aquariums, these can be a little difficult to care for due to complex housing and feeding requirements.

Rainbow originates from the Southeast Asian river basins of Phraya, Xe Bangai, and the Mekong, all of which have warm waters. They belong to the Cyprinidae family and the genus is Epalzeorhynchos.

These fish are known for their aggressive tempers and bright red fins. If you intend to keep them in your aquarium, you’ll have to provide plenty of hiding spaces to reduce their territorial behavior.

As the name suggests, rainbow sharks are not actual sharks but have shark-like fins and bodies.

Actual sharks belong to the Chondrichthyes family, while these are Actinopterygii. The absence of size and teeth means that they are not real sharks.

These have long bodies in terms of appearance and their predominant colors have red and orange combinations. They have distinct, large eyes with dark irises, and their heads are elongated.

There are also albino rainbow shark variants in the wilderness, but these are few and far between. While the albinos have orange/red fins, the rest of its body is entirely white. It will reach the size of most rainbow sharks and has a similar territorial temperament.

You will find two pairs of sensitive sensory antennae that help them detect food.

With the help of these antennae, these search for food scraps on the bottom of the tank and any unfortunate organisms that lie in their path.

Their abdomen is mostly flat, and if you closely look at the gills area, you’ll notice a slight black streak that continues to their mouth. There are prominent differences between males and females. Males have slender bodies, and their dorsal fins are full of thin, black stripes.

You won’t be able to spot these differences in juveniles, though. You’ll have to wait until these fish have fully matured. Full-grown females have thicker bodies that are less colorful in comparison to males.

A full-grown rainbow shark will reach a size of 6 inches in size.

Juveniles will take between 2 to 4 weeks to reach the size of one inch. It will take them several months to achieve 4 inches, at which point they may cease to grow.

Females are larger, and males and slightly smaller.

They are incredibly territorial and need their own space. These are quick to anger and stress, a behavioral characteristic that can lead to problems such as aggression and fights. Juvenile rainbow sharks are mostly timid and spend the vast majority of their time hiding.

In most cases, they will leave fish that live in the middle and higher levels of the tank alone, but they will go after bottom-dwelling fish, including their kind. Their territorial behavior amounts to biting, head-and-tail butting, and chasing around the Aquarium.

The only way to minimize this aggression is to buy a large tank. It would help if you had a massive tank to house these creatures. There’s no question about it. You should also provide plenty of hiding spots in the tank, such as tunnels, caves, and hollowed spaces.

Because they are active swimmers, there is a small likelihood of these fish swimming at the tank’s surface and jumping outside. For this reason, you should properly secure the tank’s lid. Jumping takes place when they are first introduced into their tanks.

Let’s get one fact out of the way: rainbow sharks are not peaceful fish. You will have a hard time pairing them up with other freshwater fish.

For starters, fish shy and timid fish like Otocinclus catfish and Marbled Hatchet fish should not be kept in the same tank. The experience would be too overwhelming and stressful for them.

As we mentioned earlier, they need an exclusive spot to themselves and will aggressively defend that area. Places they like to call homes include rocks and caves – make sure no one tries to enter that space.

As a general rule, avoid placing them with any other tank mates known for occupying the tank’s bottom levels, such as the kuhli loach. Look instead for fish that live in the middle and upper areas of the tank. These fish should defend themselves should the need arise but must have a passive nature when not provoked.

Examples of suitable fish include Botia, Syncrossus, Gouramis, Danios, Barbs, and Chromobita. Moreover, it is a good idea to keep several fish in the tank. This way, you will prevent one pair from endlessly fighting and injuring each other.

When finding an aquarium for your rainbow shark, there are a few things that you have to take into account.

They are starting with the tank size. Because Balas are very aggressive species, the minimum tank size should be about 5 gallons for a single fish and around 120+ gallons of space for 2 to 3 fish (bigger is always better).

They need that extra space to feel comfortable truly. The Aquarium should have extra horizontal space for the fish to move around. Finalize everything by installing various hiding spots so they can avoid conflict with other fish.

It would help if you kept the water conditions within the following parameters:

Make sure the pH levels are stable at all times. Sudden changes in the pH value may lead to aggressive temperaments.

They are bottom-dwellers and prefer sandy substrates, which are also found in their native waters, lined with sandy bases. The good news is that sand bases are easy to clean and rarely become polluted with food and waste.

You can also make do with fine gravel. Do not use sharp and large chunks of gravel because it can cause damage, injure their skin, and allow infections to occur.

Rainbow sharks live in fast-flowing waters, which is why you need to implement an above-average filtration system that maintains water quality and increases water flow.

Use both an internal and external filter in the tank to increase water movement. Other ways of increasing water flow are by using water pumps and air pumps.

It is highly recommended to add plants and decorations to the tank to allow them to hide and minimize extreme in-fighting with other fish. Even if you prefer to keep one alone, you will do well by installing additional hiding spaces like driftwood and caves to make them feel at home.

Some good plant choices include the following:

You can also use fake plants as long as they don’t have sharp edges that could injure your fish. It is better to buy live plants because they contribute to elevated oxygenation levels, make the tank look more relaxed, and keep the water clean.

As for lighting, they don’t need much in the way of specialist light equipment. However, we recommend installing LED lights because they are programmable and facilitate the fish’s natural day-night cycles. The decision to add lights comes down to the requirements of your freshwater plants.

Follow the above guidelines, and your fish will feel super comfortable in no time.

They are omnivorous creatures that require a diverse range of foods to stay healthy, although they’re not fussy eaters. They eat almost anything, including algae wafers, flakes, and pellets.

They are bottom-dwellers and prefer to gobble up anything that sinks to the bottom of the tank. Keep this in mind when buying food for them: it should sink to the bottom.

Rainbow Shark typically consumes plants, larvae, insects, and small pieces of meat such as zooplankton in the wild.

If you want them to maintain their signature orange/red color, provide them with foods rich in protein such as brine shrimp and frozen bloodworms. It is right for juveniles which needs a varied diet to mature faster.

Make sure never to overfeed them because too much food will upset the tank’s conditions and affect the nitrogen cycle. It would help if you aimed to feed them 2 to 3 times a day. Provide as much food as they can eat within 3-5 minutes.

Rainbow Sharks tend to mate from October to November, which also happens to be the time when juveniles reach full sexual maturity. The exact mating season depends on the length of the day and temperature.

Pro Tip: If your Rainbow Sharks are less than 4 inches long, assume they are still juveniles and not ready to mate.

It’s not easy to breed them in a home aquarium setting, and there aren’t many success stories out there. They’re just too territorial and aggressive to mate with another fish that they see as a potential intruder.

Most of these that you will find are bred in highly specialized commercial farms in Southeast Asia.

However, if you are adamant about breeding, you’ll have to put in the work. Here’s how you can get things done:

Once the conditions are just right, feed your rainbow sharks by adding protein-rich foods such as bloodworms and shrimps, and aim to partially change at least 25% of the water once a week.

After everything is said and done, you’ll notice them exhibiting mating behavior when they start rubbing against one another. Once the pair has mated, the female will leave her eggs across the substrate for the male to fertilize them with his spray.

If you manage to get your rainbow sharks to breed successfully, it’s time to provide for the juveniles.

Find a 10-gallon tank and fill it with dechlorinated water, as well as live plants and a heater. Use a nylon net to transfer the eggs into the tank. The fry will hatch after a couple of days and will consume their yolk sacs for nutrition.

Once their yolk sacs are depleted, it’s time to feed your juveniles liquid food for two weeks, switching things up with baby brine shrimps. The newborns will not be ready for the main tank until they are at least 1 inch long.

Rainbow sharks for sale will fetch a price tag of around $3 or less. They can be found in most pet stores near you and online stores.

You probably won’t have much success finding the albino variant because they’re just too rare. Do check in with experienced hobbyists who specialize in breeding albinos.

Rainbow sharks are prized for their electrifying appearance and are well known for their quick temper. Their unique personality traits mean that there’s never going to be a dull moment in the tank.

You do have to be careful about the water’s parameters and ensure that the pH value, temperature, and hardness levels lie well within the stipulated range provided above.

The only other thing you have to be wary about is the tank size. Make sure it is spacious enough (at least 50 gallons). Finally, it’s not too difficult to provide them with everyday fish food because they’ll eat just about anything.

But we don’t recommend rainbow sharks to novices who don’t have any experience with fishkeeping. Make sure you know a thing or two about fishkeeping before deciding to adopt these feisty creatures.