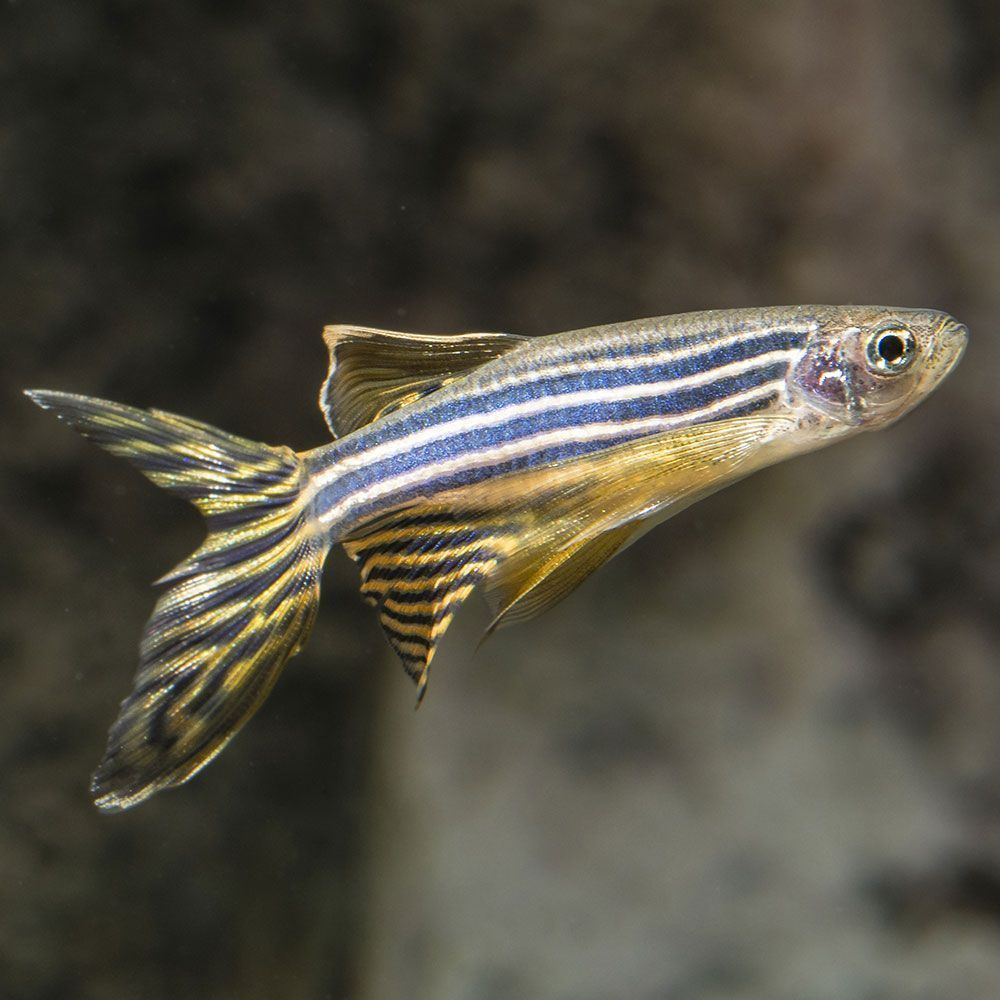 Zebra danios are a favorite among hobbyists because of their dazzling appearance and relative ease of care. You can also breed them without difficulty, so you’ll have no problems doubling your fish population in no time!

They got their name for their uncanny resemblance to zebras, with their signature black and white stripes. You’ll never have a hard time recognizing these guys.

They are hardy fish that can generally do well without much special equipment and thrive in a wide range of water temperatures and conditions.

Bonus points if you can keep the water temperature down to the low 60°.

One essential trait of Zebra danios is their loyalty to their mating partner – they stick to one partner for life.

Originating from the rivers of India and Nepal, Zebrafish (scientific name: Danio Rerio) are popular for several reasons. They breed quickly. That’s why you can find them in just about any pet store for under $3 per fish.

They belong to the Cyprinidae family and have interesting properties, making them popular test subjects for research and science.

Did you know they can repair their own heart?

Zebra Danios are easy to recognize because of their unique appearance. They feature horizontal blue, black, or purple stripes, easy to spot in a tank. These schooling fish don’t grow bigger than 2 or 3 inches and, therefore, don’t require spacious tanks.

Some breeds have sprinkling black spots on their body and almost look like leopards. If you take a closer look, you’ll notice five blue stripes extending from the caudal fin to the head.

They are a sexually dimorphic species where the males are slimmer, more colorful, and brighter than their silvery-white appearance.

Females also tend to be rounder and fuller-bodied than their male counterparts, who are slimmer with torpedo-like bodies. One popular variation of this species is the Longfin Zebra Danio, which was bred to develop longer fins than usual.

Males and females have two pairs of barbels and the same number of stripes.

One scarce species is the Albino Zebra Danio. You won’t easily find them in the wild, but they can be found quite easily in the fishkeeping industry. In the wild, these stand out and don’t survive very long because they quickly become prey.

You can also find the golden-colored Zebra danio. They have undergone so much interbreeding that their blue stripes have entirely vanished, leaving a golden-hued body with white-silvery lines all over.

Some scientists experiment with genetic modification using jellyfish genes to create Zebra Danios that glow in the dark, known as Glofish.

They come in all kinds of colors, including purple, blue, green, and orange. These species do not survive for long in the wild because of predators.

Like most freshwater species, these are small and only reach about 2.5 inches, with females reaching a maximum size of about 3 inches.

Although they are peaceful and keep to themselves, they do have some behavioral issues such as fin nipping.

Their relationship with large fish is peculiar indeed. If you keep them with larger breeds, they will try to bite their fins. This nipping behavior can harm other species, and cause fights and a lot of bloodsheds.

If you try isolating them because of their nipping problems, they will become stressed out and vulnerable to diseases to the point of death. Although they are social creatures, Don’t keep them in an overcrowded tank.

Interesting Fact: The Zebra Danio fish shares about 70% of our genetic code with humans. It’s no wonder why they’re so prized among scientists.

Most Zebra Danios are omnivorous species and prefer a varied diet of meats and vegetables. Their favorite foods include shrimp pellets, granules, and flakes (both tropical and color). If you want to induce breeding, you can introduce live and frozen foods as well.

For best results, make sure to rotate their diet every day and feed them only as much as they can eat in under 3 minutes.

They should mainly compose their diet of algae-based flakes and fresh vegetables like cucumber, spinach, and zucchini. For live foods, choose something like bloodworms and daphnia at least once a week as a treat. If you can’t find live foods, you can make do with frozen options.

Zebra danios originate from the waters of India, Bhutan, and Bangladesh. They live in a range of different water and temperature conditions. If you happen to pick them from the wild, make sure to mimic their natural habitat to increase their survival chances.

The temperature will fluctuate from 60 to 82° Fahrenheit, depending on the time of the day and month. They can live in slow-moving streams and rivers and thrive in seasonally flooded ponds during the monsoon season.

In almost all cases, their natural habitat has lots of greenery. They prefer to live in small areas with rocky substrates that can offer shade from the sun.

Most of these conditions are relatively easy to replicate in your aquarium. For the substrate, use something soft like treated sand. Make sure to quarantine and wash the sand thoroughly before introducing it into the aquarium to prevent cloudy water, which can take a long time to settle and become a source of stress.

It’s a good idea to introduce the substrate before adding the water to the aquarium. Add the water slowly to prevent disrupting the now-settled substrate. The minimum recommended tank size for a single Zebra Danio is 10 gallons.

Water temperature should be between 60 to 75°, but mostly in the low 60s to mimic their natural habitat.

Keep the pH value between 6 to 8 or primarily neutral. As water and substrate Add, you can start introducing vegetation to your tank.

Start by adding Amazon sword plants and Java Fern to the aquarium. These are known for providing water with high levels of dissolved oxygen. Besides making the tank look fantastic, the plants also provide a place for your fish to hide. It is a great way to lower their stress levels and keep aggressive behavior under check.

If your tank is large enough, you can also add some bogwood to mimic tree roots often found along the steams in their natural habitat. Another right solution is to add large, round-shaped pebbles to the tank.

It is just as important to add a sound filtration system to regulate water quality.

As mentioned above, Zebra danio fish originate from habitats with lush greenery. It is essential to mimic these for their safety and health. Here are a few plants to choose from:

Zebra danios are social species known for peacefully coexisting with other wild species, like the Emerald Pufferfish, Honey Gourami, and Scarlet Badis.

These species are ideal tank mates for the Burma Danio, Pearl Danio, Ember Tetras, Rosy Barbs, and even Bronze Cory.

You can also introduce invertebrates like African Dwarf Frogs, Zebra Snails, Nerites, and most snail species.

Avoid keeping them with larger, aggressive fish like the Redtail Catfish. It is not a good idea to pair them with the Elephant Ear Guppies or Molly Fish. It is because Zebra danios are known for nipping away at their tail fins.

Pro Tip: If you notice your Zebra danios nips at other fish fins, the tank is probably too small.

Here is our round-up of the most compatible tank mates.

Zebra danios are well suited to beginners because they are easy to breed by making just a few changes to the tank. For example, in the wild, they start producing at the beginning of the monsoon season when the temperatures have reached about 80° Fahrenheit.

It’s essential to keep males and females separated for a few weeks in a breeding tank. When separated, Diet of live foods like bloodworms and daphnia.

After about two weeks, males and females are now ready to be kept in a breeding tank. It is preferable to keep them in a ratio of 2 males per female. They will start breeding within 24 hours.

Pregnant Zebra Danios are easy to spot because they are more comprehensive than usual. You’ll also notice that her body tends to bulge out with spherical protrusions that become larger over time.

You can tell that the breeding process has become successful by fertile eggs at the bottom of the breeding tank. Eggs that aren’t fertile get to be known for their white color.

Once the breeding process is complete, you should separate the parents from their eggs because they will eat them. It could take around three days for fry to hatch out of their eggs. The fry will be very frail, tiny, and look almost entirely transparent. They are at a very vulnerable stage in their life and should have a rigorous Diet.

It’s not difficult at all to care for Zebra Danio. Just make sure the aquarium is kept to a high standard to prevent disease and infections. Although they have robust immune systems, they are susceptible to a couple of conditions you should treat once you’ve diagnosed them.

The most common disease is mycobacteriosis, which is due to non-motile bacteria in the water. You can quickly diagnose mycobacteriosis by taking a closer look at your fish, look for signs of ulceration, anorexia, lethargy, skin inflammation, and even loss of fin.

Most infectious outbreaks are made worse by low water quality, high-stress levels, and not providing the ideal water conditions.

It’s not easy to treat mycobacteriosis, and most antimicrobial treatments are ineffective. Your goal should be to immediately remove the fish from your tank and quarantine them in a separate tank. If the infection spreads, you may have to get rid of all your stock and start thoroughly disinfecting the tank before adding fresh fish.

Caution: Mycobacteriosis can also affect human handlers. Do not work with the tank if you have open wounds. Always wear protective equipment such as aquarium gloves when performing maintenance.

Another common infection to watch out for is intestinal nematodes. The disease reduces your fish’s appetite and completely ruins their colorations. They will undergo extensive weight loss.

It is a contagious disease, so make sure to keep affected fish away from other fish in a separate tank. They are to be out and treated until the infection subsides.

You can buy these from pet stores, online forums, and online stores. Rare ones like the Glofish are harder to come by and sold by experienced hobbyists who know how to breed these species. It’s not incredibly costly to find a shoal, but prices will depend on where you live.

A group of Zebra Danios will make excellent additions to your aquarium, whether you’re an experienced fishkeeper or a beginner.

Their brilliantly colored stripes and distinctive physical characteristics allow your tank to stand out. These are active species and always socializing with other fish, which means they’ll add a lot of flair to your aquarium.

While they are a hardy species, they’re not going to tolerate poor farming, which is the leading cause of infections and diseases.