Do you like plecos? Aren’t they too cute with their elongated body and a funny and friendly attitude? If you are looking for a slightly different pleco for your tanks, then the sailfin pleco or leopard pleco can be your best buddy.

The ray-finned sailfin plecos are found in the Amazon basins across Brazil and Peru. These types of catfish live for 20+ years with better care in a 100-gallon tank. They are so easy to care for that even a beginner can keep them. However, breeding this fish is tough in a home tank.

Sailfin Plecos, or the ray-finned freshwater catfish, have their origin in the river of Amazon basins near Brazil, Venezuela, and Peru. Unlike other catfishes, they are quite large in length.

With their scientific name, Pterygoplichthys gibbiceps, they are a popular member of the “Loricariidae” family. With a dark brown-colored appearance and unique spots on their skin, these plecos look unique and beautiful.

Their skin looks almost similar to the skin of a leopard. Hence these fishes are also known as Leopard Pleco or Clown Pleco.

Also, sailfin plecos are pretty famous for their shape, as they seem almost similar to sail or yacht. And this is the very reason behind the unique name of this fish species.

They usually grow a bit large, and with their eye-catchy look, they are pretty suitable for a community aquarium. These fishes have an elongated body with the covering of bony plate-like structures in their armored clad scales.

Sailfin pleco comes with a huge head and tiny eyes. Their eyes are placed uniquely on their head, which helps this fish to have perfect eyesight.

Juvenile plecos are usually of the same color as an adult sailfin pleco. Unlike other catfish, they do not change their color as they grow. On the other hand, their dorsal fin is beautiful and looks much similar to marine sailfishes.

Besides, the attractive dorsal fin has rays on them, which makes them appear pretty different from any other fish. Leopard plecos are thus very unique to keep in your tank. 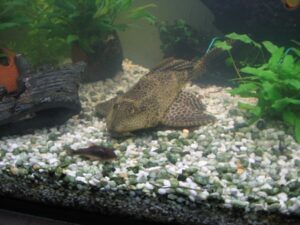 Pterygoplichthys gibbiceps exhibit amiable behavior. However, they can get hostile towards their own specimen type.

Also, these fishes might feel threatened about losing their individuality. But they are not at all aggressive.

Besides, these fish species are night lovers. Thus, they tend to be much active during the nighttime.

Since sailfin plecos are bigger in length, they need a large tank for their care. They can grow larger if they receive proper care in a robust tank capacity.

Also, these plecos need adequate space to swim around. Thus, you need to arrange the aquarium decor in a way so that your fish can stay healthy while swimming about happily. To make pterygoplichthys gibbiceps feel safer, you must replicate their tank decor range similar to their natural habitat.

You can incorporate some illuminating objects in tanks to ensure that they get a minimum amount of light during the night hours as they are nocturnal by nature.

Do you know what is more interesting about sailfin pleco? These fish species are easy to sustain at any water temperature. Though you can keep this fish in a bit of soft and slightly alkaline water, it is better to provide them a neutral water condition.

For leopard pleco, it is crucial to ensure a tank set-up, which will offer this fish the proper level of care. So, here are a few tips that you can follow for setting up the tank properly.

Sailfin plecos are pretty peaceful by nature and very cheerful as a fish. They easily get along with all other fishes. Thus, keeping them in a community tank will be much easier for you.

These gibbiceps don’t eat other tiny tank mates, so you can easily house them with smaller size fish species. But introducing them with another sailfin pleco in the same tank might threaten each other to some extent. With another pleco in the tank, these fish can become much distressed and tend to be territorial.

So, if you are confused about the compatibility of tank mates, which would gel well with a sailfin pleco, check out the list below. 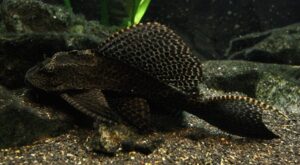 What Do Sailfin Pleco Eat?

These plecos eat almost anything as they are not at all picky eaters. Usually, a sailfin pleco is omnivorous by nature and feeds on plants and animals for their living. Also, these fish quickly feed on algae that grow in the natural habitat.

So, you can consider adding wood as decoration to the tank, which will generate more algae. And this can be a good source of food for your sailfin pleco in the tank. Besides, algae wafers and other algae-based foods serve to be the staple food of gibbiceps for their better nutrition.

Though most of their diet consists of algae, you need to add much variety to their diet. And for doing so, you can offer them fish pellets or dead meat. However, gibbiceps do not need flake foods, unlike other plecos.

Thus, you can offer these fishes other food products like snacks or vegetables regularly. Foods like zucchini and cucumbers are great options for them. Also, you can offer this fish a mixed diet of frozen and dried live foods.

Sailfin plecos easily eat insects in the wild. So, you can offer your gibbiceps with bloodworm or larvae for a change in their diet.

It is simply effortless to provide care to your leopard plecos. Neither do they require a complex diet, nor they demand top-notch maintenance.

This freshwater fish species are usually bottom eaters. So, to offer them proper care for feeding, you must provide them fish food once or twice a week based on the algae growth in the tank.

Besides, these sailfins are a bit messy as they excrete very often. Also, they tend to eat from the excreted substance, which is not good for their health. So, make sure to perform frequent water changes for this fish.

It is better to clean their tanks once every week. Ensure to equip a proper filtration system to the aquarium to facilitate better water flow and keep your sailfin pleco happy and healthy.

This breed of catfish is too sensitive to medications. So, as an owner of a sailfin pleco, you need to make sure that you keep them away from any disease. Even if you need to add medication to the aquarium, make sure it is in the right proportion.

Besides, to maintain the good health of your fish, you need to keep the plants in the tank clean. Also, these gibbiceps might start eating plants as they grow. So, be very careful not to add any plastic plants to the tank as decor.

Though a pleco sailfin is quite hardy, it can fall ill sometimes. In case the water parameters do not fit these fish needs, they can fall sick. Gibbiceps are more susceptible to the most common fish disease, ICH, and various other parasitic infections. Thus, it is essential to maintain very high water quality in the aquarium. 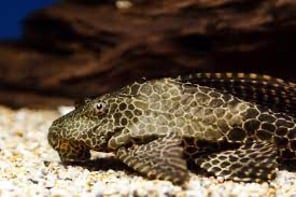 Though raising a sailfin pleco fish is much effortless, their breeding may not be that easy. This Gibby pleco fish can be pretty challenging to breed at home as it is quite hard in sexing them. They can be recognized with a trained eye only.

Thus, these plecos are typically bred on a commercial basis. To breed a pleco sailfin pair, you need to keep the adults in a large commercial fishery pond. You need to create an artificial spawning bed for these fish to help them in mating.

Do you know this pleco pterygoplichthys gibbiceps easily breed in the muddy water of Brazil, Peru, and Venezuela? And this is why it is better not to opt for breeding these gibbiceps in your home aquariums, as they are better bred either in their origin of natural habitat or artificially.

There are some fascinating facts about sailfin plecos. Do you want to know them? Well, then have a look below.

Where to Buy Sailfin Pleco Fish?

You can easily buy a sailfin pleco from your nearby aquarist shop. Gibbiceps are not only easy to find but also available at an affordable pricing range.

You can even get them from any fish hobbyist store. Besides, there are plenty of online fish and animal stores where you can place orders for these lovely and cute plecos with brown spots. 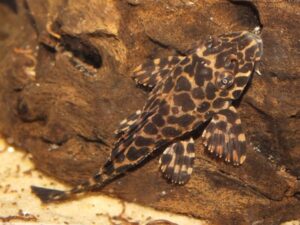 How Big Do Sailfin Pleco Get?

A pleco sailfin usually extends up to 50 cm in length, which is a huge size compared to any other catfish of these types.

How Long Does Sailfin Pleco Live?

Just like its look, a leopard pleco is also quite different and unique in terms of lifespan. Sailfin plecos usually live longer when they reside in their natural habitat. But in captivity, the life span of this fish reduces to a certain extent.

These fishes usually live as long as 20 years while they are in their wild habitat of Brazil, Peru, and Venezuela. However, their lifespan can drop up to 10- 15 years when kept in an aquarium.

Is Sailfin Pleco Suitable for Aquariums?

Yes, indeed, a sailfin pleco is pretty easy to take care of in a home aquarium. This fish looks quite different with its sail-shaped, large size body and comes as a unique one to add to your tanks.

Also, as they are usually omnivores by nature, they easily eat almost anything in your tank. Due to their calm and peaceful temperament, these plecos serve as great tank mates for other fish species. Thus, for beginners, sailfin pleco pterygoplichthys are simply one of the best choices.

Why the Fish Tank Water is Cloudy? Causes and Fixes

What is the Biggest Fish in the World?

What do Tadpoles Eat?