Are you looking for a beautiful fish for your freshwater aquarium? Well, then Epalzeorhynchos bicolor is an apt choice for you. Also known as red tailed black shark, this fish can be one of the best collections for your aquarium.

Red tailed black shark is a little freshwater fish native to Thailand.  Growing up to 4.5-inches, these fishes are best kept in groups of 6 or more without any worries. These fishes are semi-aggressive but do not attack unnecessarily. They can be easily taken care of by intermediaries.

Red tail black shark, a small freshwater fish, is also known by other names like red tailed labeo, red tail shark minnow, and fire tail. These are primarily found in the floodplains and clear water streams of the MeNam Chao Playa basin.

This red color tail shark is widely known for its amusing appearance. Its sleek black body gets highly complimented with the vibrant forked red tail and a white tip dorsal fin.

Despite being named shark, this fish is a type of carp that is one of the Cyprinidae family members. These sharks are generally not schooling fish, but they dwell peacefully unless disturbed. Thus, they can be easily kept together in a community tank with other quiet fish species.

Even in captivity, these sharks can grow up to a maximum of 6-inches and a minimum of 5-inches. And the best thing about this redtail shark is that anyone with intermediary-level fish-keeping experience can pet them at ease.

Due to their attractive color combination and sober behavior, they are usually found in many home aquariums as a private collection. People find these fishes too amusing to add to their family.

This freshwater fish cultivates their temper as they grow up by age. The red tailed sharks are pretty timid when they are juveniles. That is why they need to be provided with enough space for hiding purposes.

However, by the time they turn into an adult, they become territorial and might get aggressive. But they tend to show their aggression only when other fishes try to invade their territory, which is why they are known as semi-aggressive fish.

One reason that can excite them is food. These red tail sharks tend to bully other fishes if they are fed closely together.

Red tail sharks are neither very difficult to take care of nor very easy. Thus, you need to be a bit careful about keeping them calm and happy, focusing on their temper issues. And to begin with that, it is vital to make their aquarium a reflection of their natural habitat.

The quality of the tank water also plays a crucial role in maintaining your fishes’ good health. These sharks are native to freshwater algae ponds, and during the rainy season, they often inhabited bottom streams, lands, and even forest areas. So, you need to keep them in a freshwater aquarium with minimal aquascape.

Besides, keeping their activity level in mind, it is essential to opt for an aquarium that is spacious enough and allows them to swim freely and mark their own territory.

However, the tank needs to maintain an optimum pH level, temperature, and water hardness range. You can also add a filtration unit to keep the aquarium water clean, but it is not necessary as these fishes are not much messy.

Now, to provide the best quality care, the tank of your red tail sharks requires a few assortments. This species of red shark usually has no such preference for lighting in their tank but can go well with lots of plants and foliage. Thus, ensure the tank space is shady enough so that they get enough place for hiding.

You can decorate the aquarium with additional décor items like several artificial or live plants, rocks, and driftwood pieces to make it more home-like for your fish. 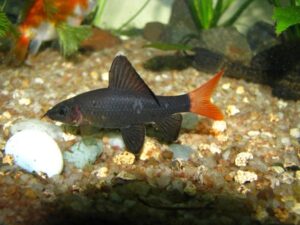 In order to offer a premium level of care for your red sharks, you must ensure that you are forming a top-notch tank set-up. And for that, you must undertake all measures to make your tank have everything that your fish needs.

So, here is how you can accelerate an accurate tank set-up that your red tail shark wants.

As red tail sharks are mostly known for their territorial nature, they tend to become both aggressive and peaceful depending on whether they are getting disturbed or not. Due to this personality, they are generally categorized as semi-aggressive fish.

The best thing about these fishes is that they don’t attack or harm other fishes unnecessarily. But they can bully the opponent and make them die out of malnutrition and exhaustion. It is also crucial to keep them away from the rainbow shark as they are very prone to engage in frequent fights.

Though red tail shark is not much of a schooling fish, they can be easily kept in a community tank with other species. But you need to be careful enough while selecting their tankmates.

It is better to opt for fast and robust tankmates that prefer to spend their time in the upper and mid-levels of tank water, such as:

What Do Red Tail Sharks Eat?

A proper nutritious diet is another crucial factor that helps your red tail sharks lead a healthy and long life. This fish is generally known to be omnivorous by nature.

In the wild, they consume crustaceans, small insects, and plants. Similarly, this red tail black shark can feed on several things while living in an aquarium. Their diet primarily includes pellets, frozen flakes, and live foods.

You can also make some addition to their diet, such as vegetables and other meaty foods. The meaty foods that your little sharks can eat include krill, daphnia, brine shrimp, and bloodworms. While for vegetables and plant matter, you can feed your fish with peas, cucumber, fruit, and zucchini. 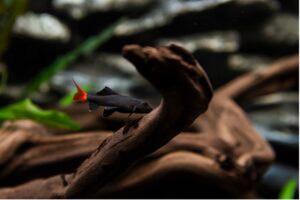 Caring for red tail sharks is not a very difficult task unless you know how to keep them happy and calm.

While taking adequate care of your sharks, you need to perform frequent water changes regularly. You may also vacuum the substrate once in a while as they are not much messy.

Along with that, you also need to keep checking if the water parameters are accurate to ensure your fish’s good health. Any fish need to keep their aquarium or tank water clean in order to prevent them from getting harmful diseases.

So, are you eager to welcome baby red tail sharks to your aquarium? Well, then it might not be good news for you, as they are not eligible to be bred in a home aquarium.

It has been an unregistered fact that anyone has ever conducted successful red tail shark breeding at home. And the main reason for this is their intolerant nature towards each other.

It usually requires huge commercial breeding facilities to breed them. Their hormones are taken to induce mating in such a commercial environment.

Generally, when their females feel ready to reproduce, their abdomen becomes more rounded and fatter. And this is the only single visual variation between a female and a male specimen of a red tail shark.

Since these red tails are egg layers, they are prone to spawn in rocky caves. After the eggs get fertilized by the male fishes, it takes around 40-60 hours for hatching.

Gradually, as the fries develop after hatching, you will evidence a change in their color. They turn into brown color from silver before getting completely black. By almost 10 weeks, their red tail also develops.

So, do you think red tail sharks are fun enough to be around? If yes, then there is more to get amused at. Here are some of the interesting facts about them, have a look.

Red Tail Black Shark is not very common as they are on the verge of getting extinct. Thus, you can get these fish from any hobbyist store or fish lover who collects various fishes and does aquarium trade for a long time.

However, you might also surf online for this fish. There are possibilities of getting red tails online, but it might not be very pocket-friendly.

How Big Do Red Tail Black Shark Get?

Usually, Red Tail Black Shark grows up to 4.5-inches. But it tends to grow up to 5-6 inches if taken proper care of.

While the red tail black shark is an interesting and too beautiful fish to add as one of your family members, petting them can become quite a challenge for beginners. However, an aquarist with a few years of experience can undoubtedly go for red tails if they have enough budget and ample space at home.

As these Red Tail Black Shark occupy a huge space just for living calmly, it becomes a great responsibility to keep them alive and even breed. Although in accurate home aquariums, they can undoubtedly become a fantastic addition, spreading joy with their rich, vibrant colors.