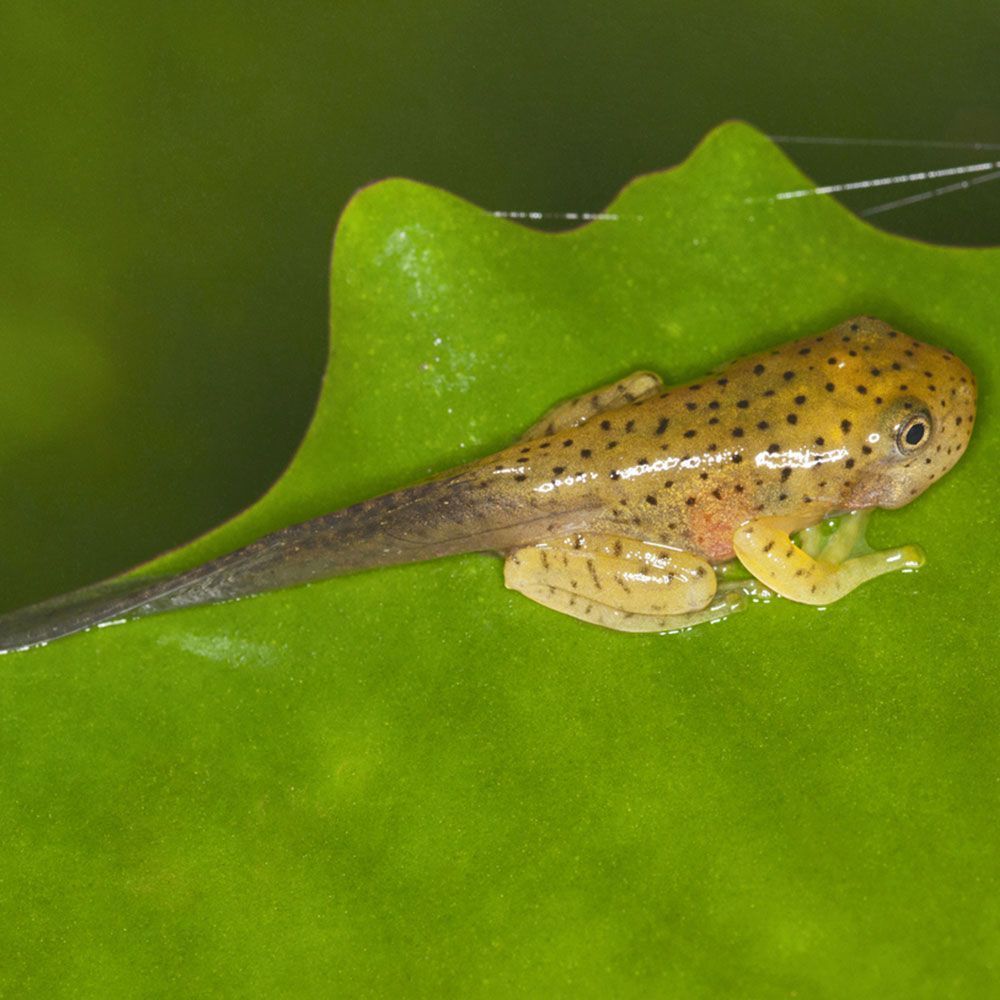 What do tadpoles eat? Well, this query can instill some curiosity in you since they don’t stay the same forever.

Within a few weeks, they tend to grow into a full-fledged frog, whose eating and diet pattern is entirely different from their younger selves.

At their initial stage, tadpoles thrive on their egg yolk sack. After they transform, their diet shifts from vegetable matter to solid proteins. They eat an extensive range of food like plants, algae, small fish, insects, etc.

What do Tadpoles Eat?

They tend to grow faster. Even their body goes through a drastic change during the transition period from a tadpole to a frog. They start their life as amphibians with gills, which get transformed into lungs as they become a frog.

This is what makes it a bit more challenging to decide the diet. It only takes a couple of weeks for them to change and grow completely. Thus, they must have a diet that can serve them all the essential nutrients, improving their growth.

Fun Fact: Tadpoles start their life as herbivores but eventually turn into omnivores as they grow and finally become carnivores when they are fully grown frogs.

In the Wild or Ponds

Before tadpoles become capable of finding their own food, they thrive on their egg’s yolk sac. As they are newly hatched, they require foods that contain high protein, which they quickly get from it.

When they are young, they possess a unique intestine structure, different from their grown-up forms.

They possess a coiled intestine designed to digest only vegetation, and they can only extract calcium and protein through it.

After 1-2 weeks of being born, they are small enough to move around and find food, they tend to eat algae.

They prefer to pick water as their natural habitat, where they get access to plenty of highly nutritious foods.

They move onto plants, stems, or leaves, and later they transform their diet by consuming smaller insects.

The most common food they have in the wild is, dead insects, variegation, water striders, mosquito larvae, fish eggs, dead fish etc.

As they grow, they slowly change their diet. They even start eating some small fish.

When they are mature, they eat almost anything that fits into their mouth. During this time, they usually consume as much food as possible, which helps to speed up their growth and serves them the adequate nutrients they need.

If they cannot find fish or insects in their natural habitat they might eat their fellow tadpoles using the same process of preying.

In Captivity as Pets

To keep tadpoles healthy and on track with their growth, you need to ensure that you are feeding them regularly.

One of the interesting facts about them is that they can easily survive in an extensive range of water pH levels. The most suitable pH level for their tank is 6-8, which makes it ideal for them to grow correctly. Make sure the nitrate level in the tank is low.

Adding live plants into the tank can be a great idea as sometimes plants act as a secondary food source. Also, it is essential to serve some hiding spots for them in the tank, which will make it more comfortable for them to accept the food you are offering.

While adding live plants to your tank, keep in mind that they will munch on it. Thus, it is better to get some hardy and faster-growing plants in the tank that can survive easily.

The food you will feed them is highly dependent on their maturity.

Baby tadpoles will readily accept any store-bought regular fish food, algae wafers or flakes as these are easy to eat. You can also find special foods in some stores.

Giving them finely chopped, uncooked vegetables such as spinach, carrot, lettuce, broccoli etc. is also an excellent idea to serve them the necessary vitamins.

With their growth, you need to make the required changes in their food habits. For example, you can introduce them to larvae or dead insects in their diet.

If you notice that your tadpoles are not eating these foods, they are simply not ready to have such food items. So, you can start introducing them to such foods when they are 3-4 weeks old.

Proteinaceous foods in their diet are an essential source of nutrients for them. From their hatching to metamorphosis, they consume a lot of protein to shape their growth.

To serve them the necessary protein, you can consider giving them animal matters. At this stage, you can offer them aphids, bloodworms, or any other small insects.

Giving them direct meat will not be a good idea until they reach a particular stage of accepting it naturally.

Protein helps them to grow their legs properly. During 7-9 weeks of their age, you can add more animal matter to their diet.

As you feed tadpoles, check after sometimes whether they have eaten the food or not. If they haven’t, scoop it out of the water to keep the tank clean and avoid bacteria accumulation.

Here is the list of feeding items you can give them while petting in your tank:

When they grow their legs, they require foods that have a rich source of protein. Therefore, as soon as they develop their back legs, they transform their diet pattern by including protein.

Offering them flakes and goldfish food will also be an excellent choice to encourage their growth at this stage.

How do tadpoles eat?

Tadpoles throw their long tongues to capture food. The food sticks on their saliva in their exceptionally longer tongues, which they retract, and the food gets down their throat.

They readily accept duckweed as suitable food for their herbivorous diet.

If you are thinking of offering bread in their diet, you can go forward as they will eat it right away.

They also prefer to have bread crumbs rather than solid bread.

It is better not to give them bread or bread crumbs regularly as these foods lack the essential nutritional value. Their natural diet must include a lot of protein rather than carbs and gluten.

Once a week, you can easily give them some bread treats.

Yes, they do. Tadpoles need a lot of animal protein during their time of metamorphosis. They eat any small fish that they find in the wild.

The elder ones readily accept any fish that fits the size of their mouth. Those hungry cuties strive to initiate their transition from an omnivore to carnivore.

Whether a tadpole will eat goldfish or not depends entirely on the sizes of the tadpole and goldfish.

If they are older enough to accept fish as their food, they will readily eat smaller goldfish that fit into their mouth.

However, they will not eat larger goldfish, which are bigger than their size.

Yes. they do eat bloodworms. They are rich source of protein.

They love to have orange treats in their diet. You can give them finely chopped carrots as their food. Carrots serve to be a rich source of vitamins.

While offering them carrots, you need to make sure that you had frozen the carrot before and thawed it properly to soften it enough for easy consumption.

Since they easily accept algae, leaves, and roots of aquatic plants, it is not unnatural to expect them to eat moss.

They love to have moss as a part of their diet. Moss serves them the essential nutrients, which are highly necessary to boost their growth.

What kind of lettuce do tadpoles eat?

Munching on raw lettuce can be difficult for the tiny ones. It is better to chop the lettuce finely and then boil it to make it softer, making it easier for them to eat and gulp.

Initially offer only a tiny amount of lettuce, spinach, or any other green veggies then gradually increase the amount.

So, by now, did you get the apt answer to your question, what do tadpoles eat? They tend to eat almost anything from vegetables to animal matters that enhance their growth and helps them grow their limbs.

During the development period from a tadpole to a full-grown frog, many changes need to be made in the diet.

They eventually grow from herbivore to carnivore, which marks a very drastic and diverse change in them.

Their dietary requirements can differ as per the species of the frog.