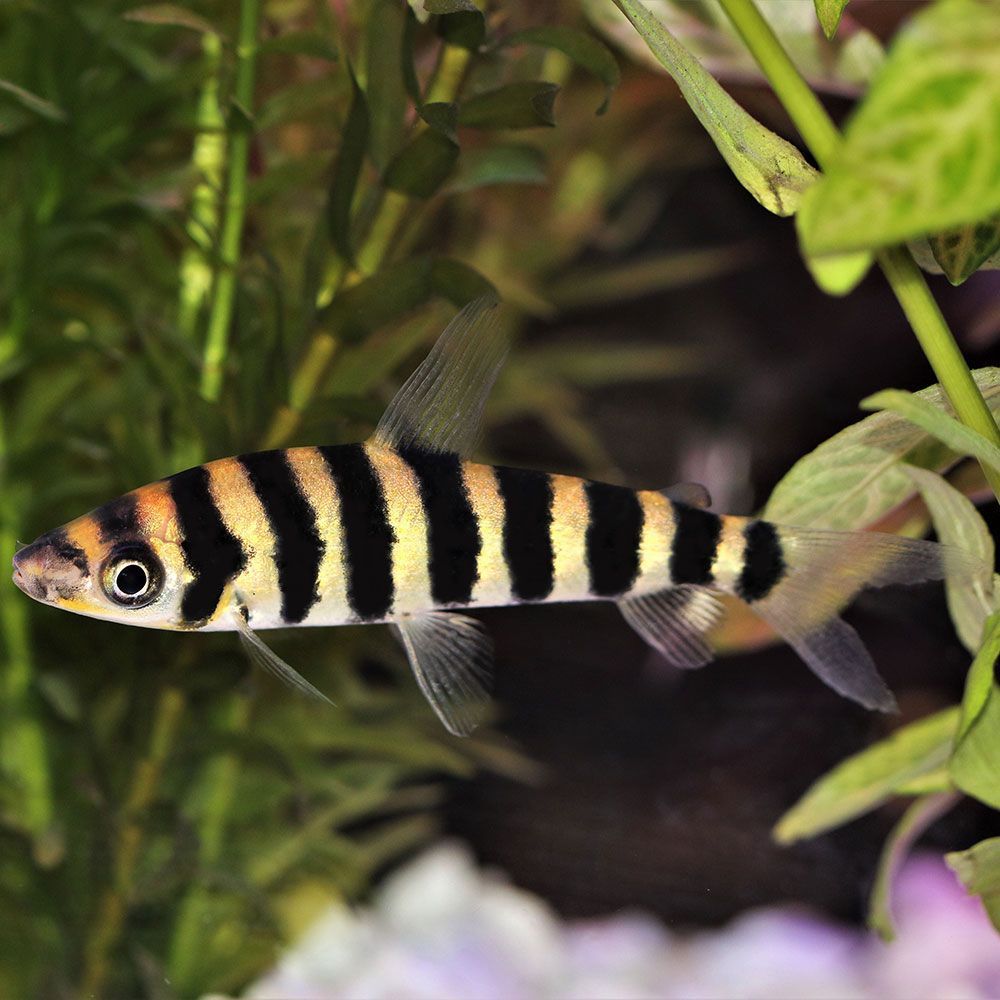 Do you love fish species with stripes? There are tons of striped fish but Leporinus fasciatus has become one the most popular species among aquarists.

Appearing like zebras and bumblebees, this fish not only offers an eye-catching appearance but also adorable behavior when kept in the community tank.

Leporinus fasciatus or popularly known as the black-banded leporinus is a popular aquarium fish native to South America.

Growing up to 12 inches, it can thrive in a 70-gallon aquarium. It’s a herbivore omnivore that can live in a community tank but requires considerably difficult care.

Leporinus fasciatus is the black and yellow-stripe fish coming from the basins and rivers in South America before being widely kept in the aquarium.

It’s not an endangered species but breeding in captivity is still not common for this black-banded Leporinus.

The torpedo-shaped fish has a bold shape and behavior. It can group up to 12 inches and can live more than five years in its native habitat.

The large fish can be aggressive in a community tank and tend to be mid to bottom dwellers. The herbivorous omnivorous fish breeds with egg layers but there is limited information on successful captivity breeding.

The captivity of these could be very difficult but proper tank setups can help aquarists to keep these fish in the aquarium environment.

While Anostomidae family members might have been so popular in Central American and South American aquarium markets, Leporinus fasciatus is somehow more segmented.

These fish typically inhabit swiftly moving rivers in those regions. It develops crushing front teeth to eat snails in the native habitat which also explains its name(leporinus = hare/rabbit).

As fry or juveniles,  it has less dense stripes that are only five in general. However, one band would split into two separated with the golden yellow or mustard color so you can even identify the age of the fish by counting split bands.

Only Leporinus fasciatus and Leporinus affinis have these black and yellow stripes in the genus.

While both of them have distinctive characteristics, they can be differentiated by the number of stripes and the shape of the tail fin.

Adult Leporoinus fasciatus can have ten stripes and pointed tail fins while leporinus affinis would only have nine stripes and a rounded tail fin. Leporinus fasciatus’ specific feature is their throat which has dusty or finely spotted red coloring.

Since Leporinus fasciatus can grow into a 12-inch adult fish, you’d need at least a 70-gallon aquarium but larger tanks are always better.

Their natural habitats are rocky river beds with strong water currents so you’d need to mimic this very environment to help them live well in the tank for sure.

You better use a powerhead to drive constant water flow in the aquarium when keeping this fish.

The bottom of the tank would be better if installed with fine substrates like sand or fine gravel because Leporinus fasciatus is a mid to bottom-dweller species.

They would hide in the rocky clefts and fissures when provided one just like other Anostomidae species.  Heading down is a part of their habitual positioning either for camouflage or grazing.

There’s no certain explanation for that particular behavior but if you can mimic that environment, you can prevent your striped Leporinus from being stressed in the aquarium.

You may also décor your aquarium with plants to help them with this positioning as well. The constant current in the aquarium is also the key to keeping the best possible environment.

Not only good-looking, but the black-banded leporinus is also a great jumper species. Given any opportunity, they can jump high and out of the aquarium. That’s why you need to use the fit and tight lighting top or locking cover for your tank to prevent them from “escaping”.

Plants provide them with better camouflage but they would likely eat them as well.

If you want to use live plants, then you should choose the sturdier or harder ones like java fern. Otherwise, you can decorate your tank with plastic plants instead but use the quality ones to prevent them from being swallowed by the Leporinus.

When it comes to the ideal water parameters to keep Leporinus fasciatus in the aquarium, you need to keep water acidic, soft, and warmer.

You’d need to soften the water and make it more acidic when the breeding time has come.

Aquarium decoration isn’t necessary when keeping Leporinus fasciatus but the rocks and plants for positioning are something you better work on.

Despite the fine substrate, you better set some twisted roots and driftwood branches to create the natural arrangement as much as possible.

The aquatic plants may beautify your sets but the fish may eat them so you better choose the sturdy ones.

Above all, you must ensure proper and adequate oxygenation in the aquarium. The water quality is the most fundamental part of biologically mature the tank environment to ensure your Leporinus fasciatus adapts to their new habitat with no problems.

This way, regular water changes are an inevitable task despite maintaining a robust filtration system.

When living in the community tank, Leporinus fasciatus can be generally tolerant of other large fish species.

However, these may fight with each other even though they’re naturally living in schools. The chance of conflict is higher when they’re kept in smaller groups.

Whenever possible, it would be better to keep them in larger schools and then add tank mates.

Consequently, you can use larger tanks than 70 gallons to cater to more of them. Even if it’s not possible to carry larger schools, don’t keep your Leporinus fasciatus alone in the tank since they’d be stressed out.

These would get along well with large and rugged fish in a community aquarium. You must avoid smaller fish as they would easily prey on them.

The basic setup would be a school of these species and big fish as tank mates.

Calm Cichlids are popular and good tank mates but you must avoid the aggressive species. You don’t want bloody conflicts between the striped Leporinus and aggressive cichlids in your aquarium.

These are some other best ideas for Leporinus fasciatus tank mates:

You should avoid co-inhabitants of a smaller size than your Leporinus fasciatus but avoid too-peaceful species.

Semi-aggressive fish is a perfect option as they have to defend themselves from Leporinus fasciatus which may nip at their fins. Angelfish and other slow-moving fish with long fins are certainly not recommended tank mates.

While keeping the fish is a little bit tricky, it isn’t picky on food. However, the feeding times could be a tricky task because these fish may become territorial when you feed them.

Most of the quarrels times are happening during feeding time. They may harass or attack other fish in the school.

At this point, you must ensure the adequate supply and proper feeding frequency. Spread the foods instead of focusing them on one feeding spot to avoid incidental grouping.

Despite their vegetarian diets, Leporinus fasciatus can also take small live foods like worms, larvae, or pond snails. Fruits are also a part of their diet in their native habitat so you can give them some as supplements in the community tank.

Despite its popularity, breeding in captivity could have been the most difficult part of keeping Leporinus fasciatus.

While some other Leporinus members may be over-bred in aquariums, that’s not the case for these fish. You may have heard about some success stories but most of them are just rumors.

It’s almost certain that the ones you’ve kept in the aquarium came from the wilds and are consistently imported through aquarium trades.

That also explains why Leporinus fasciatus is rather difficult to adapt to biologically immature tanks.

It is an egg layer species, you need to research further about the science of breeding this species.

You can do your attempts but don’t stress out your fish and don’t expect a successful attempt. The best idea to add another one is by buying one.