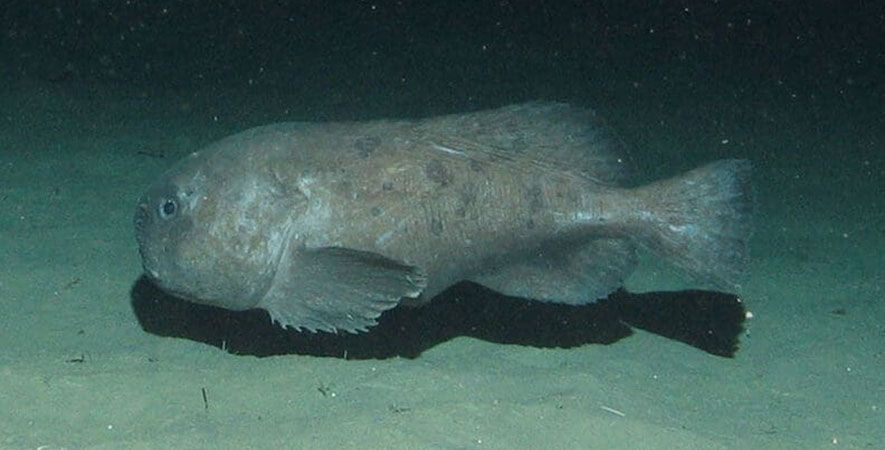 The ocean is so vast and deep that scientists estimate that about 80% of the ocean has yet to be explored by humans.

One of the creatures that dwell in fairly unknown territory is the pink gelatinous animal known as a blobfish.

The blobfish (Psychrolutes marcidus) is a pink, gelatinous fish and is found in waters off the coast of Australia and New Zealand that are between 2,000 and 4,000 feet deep. Blobfish eat small animals like crustaceans, worms, and snails and can be up to two feet long.

Little was known about this fish until it was recently voted the ugliest animal in the world by the Ugly Animal Preservation Society and it quickly became an internet sensation.

Now scientists are trying to find out more information about them, but it isn’t easy because this creature can’t survive when removed from its natural environment.

It is a member of the Psychrolutidae or the fathead sculpin family and goes by several names including:

There are several species of blobfish including:

The blobfish was only recently discovered in a 2012 ocean census, but other reports show that it was first discovered in 2003 by marine geologist Kerryn Parkinson in the waters near New Zealand. This is a relatively recent discovery compared to the millions of years that this fish has been alive.

Originally scientists classified the species in 1926, but it was only until now that we are seeing and hearing about this species.

Because this fish is only recently discovered, scientists are limited in their knowledge about this curious species.

The main issue is that scientists are unable to observe the blobfish in its natural habitat because it is so deep in the ocean. But now it has become more well known, fishermen and others who happen upon them can report their findings.

The blobfish is unique in its anatomy and design. It has some flexible bones (similar to cartilage) and muscles, but not many compared to the average fish. Unlike other fish, it does not have a complete backbone.

Interestingly, it does not have a swim bladder either like some cartilaginous fish like sharks and stingrays. The swim bladder is what gives a fish its buoyancy but it does not need this organ. Where it lives, the pressure is 60 to 120 times greater than at sea levels, a gas bladder would not work well.

The blobfish has a pinkish, grey, jelly body rather than scales that have a density that is slightly lower than water, which allows it to stay afloat. When it is healthy and in its natural habitat, underwater cameras show that its color is closer to a tan and grey rather than pink.

While it has fins, they are small and don’t allow the blobfish to swim very quickly. This special flesh is what allows the fish to survive at such high levels of pressure.

When it is removed from its natural environment and the pressure decreases, it “deflates” and loses its shape, hence the name blobfish. The high pressure of the deep sea allows it to stay afloat and gives the body structure.

A large globe-like head, large black eyes, and a wide mouth characterize this fish. They can reach up to two feet in length, but amazingly, their head makes up about 40% of their body mass which is thought to be about 20 pounds. Their bodies are relatively slim compared to their large heads.

These fish have a single closed circulatory system which is where the blood passes through the heart just once before circulating through the rest of the body.

The blobfish inhabits waters that are at least 2,000 feet deep and no more than 3,900 feet off the coasts of Southern Australia, Tasmania, and Western Australia. They have also been found off the coast of New Zealand.

This may not seem deep compared to the 12,000-foot ocean, but any creature that can survive below 700 feet deep is considered a deep-sea creature. Humans could never survive any pressure deeper than 130 feet. Where a blobfish lives the pressure is 60 to 120 times greater than at sea levels.

It is very possible that blobfish reside in many parts of the ocean, but as far as we know, these are the only locations where they have been sighted.

Researchers have reason to believe that the population is relatively concentrated as females have been sighted resting on eggs in groups. This data also alludes to a potential social life for the fish.

The deep sea is a harsh environment and it is surprising that there is life there at all. The water can be as cold as 37° Fahrenheit and there is little to no light that reaches such depths. Creatures that live in these conditions have to have specially adapted bodies that allow them to survive such pressure and darkness.

Food is scarce in the deep seabed so Blobfish do not expend much energy scavenging or hunting for food. They lack hunting instinct as well because they don’t need it!

They are primarily sedentary creatures with opportunistic instincts.

There is practically no competition that deep in the water.

They pretty much eat anything that floats their way. These don’t have teeth, but they have very acidic stomachs which allow them to break down all sorts of crustaceans.

This would include a menu of:

They are pretty much the garbage disposal of the ocean and aren’t picky when it comes to meals.

While no one has observed it eating, some of the above-listed foods have been found in the intestinal tract of dead one, and other foods on the list are guesses made by scientists based on the diet of other similar creatures.

This being said, these don’t need much food to survive and can go weeks without a substantial meal.

It is difficult to track the population as sightings are uncommon, but marine researchers estimate that there are only about 400 blobfish left in the ocean which could potentially qualify them as an endangered species but more information must be found about them until the International Union for Conservation of Nature’s Red List can officially indite them as an endangered species.

Fishermen are the biggest threat to the Smooth-head Blobfish, but most fishermen are not purposely hunting them.

Blobfish tend to hang out in the same habitat as highly sought-after crustaceans like lobsters and crabs.

Subsequently, these often end up in trawling nets as bycatch (or unwanted fish) in commercial fishing. Usually, when fishermen pull them up they are dead by the time they reach the surface because they are not accustomed to the altitude above sea level.

The Australian Fisheries Management Authority has closed some of the blobfish’s habitat to fishermen in an effort to protect them and other endangered species.

The blobfish really doesn’t move around very much. Their low muscle mass means that they are meant to float more than swim.

Scientists guess that they could live up to 130 years old. Because they have such a long lifespan like many other deep-sea creatures, these have a very slow reproduction rate.

It is guessed that female blobfish can lay up to 100,000 eggs at a time. Because members of this family are known to have demersal eggs (eggs attached to the bottom ), guesses are that the blobfish carry eggs this way as well.

The fish would lay the eggs in a rocky nest and then hover over the eggs until they hatch. They will typically lay eggs in warmer waters that are not as deep as their normal dwelling.

Mr. Blobby: The Ugliest Animal In The World

The first blobfish discovered by scientists was discovered on the Norfolk Ridge of New Zealand during the NORFANZ research voyage. The crew affectionately decided to name it “Mr. Blobby” and his picture with his large drooping nose and slimy skin quickly circulated on the internet after The Ugly Animal Preservation Society deemed him the world’s ugliest animal.

The society has a noble mission to preserve the less aesthetically pleasing animals on the planet.

People were instantly amused with his seemingly disgruntled look and almost human-like quality. People also seem to feel a sort of pity for the fish, confirming The Ugly Animal Preservation Society’s opinion, again voting it “world’s ugliest animal” in 2013.

Soon, Mr. Blobby was appearing in memes, on T-shirts, in stuffed animal form, and as the start of silly songs.

Mr. Blobby has even appeared on the show “Saturday Night Live” and in commercials.

Unfortunately, Mr. Blobby has since been preserved in 70% ethyl alcohol and is part of the Australian Museum Ichthyology Collection. He no longer looks so “blobby” as his body has shrunken and his skin has tightened in the preservation liquids.

Because this fish was a recent discovery, there is still a lot we don’t know about it. These aren’t able to survive in low-pressure environments like above sea level, scientists have a hard time studying them.

Here is what scientists still have yet to find out about these species:

Can you eat a blobfish?

Because of the jelly-like consistency of their flesh and the acidity of their body, these are not considered to be edible for humans. Rumor has it that one fish expert in Sydney, Australia cooked up a blobfish dish and said it tasted delicious!

Can you have a blobfish as a pet?

No, you could not have one as a pet. Coming by them is very rare, and they are only found at a specific depth of the ocean. When they are found, they typically die before reaching the ocean’s surface.

Where can you see a blobfish?

It is reported that the Aquamarine Fukushima aquarium in Iwaki, Japan has a blobfish on display that was accidentally fished by a fisherman’s net.

The tank where Bob the blobfish lives has been specially modified to imitate the deep-sea environment from where he came, but still, Bob’s body has changed a lot from the time that he was first captured. His body has now grown spines in an attempt to protect himself in his new environment. The aquarists say that because these fish are used to the darkness, Bob tends to be shy, hiding under the rock in his tank.

Although technology doesn’t allow scientists to visit the depths of the ocean where these fish live, if they are sighted in more shallow areas or accidentally fished, they can still be used for research.

The Atlas of Living Australia allows anyone to report a potential sighting of a blobfish at this link, allowing almost anyone to take part in important scientific research.

The existence of a creature like a blobfish shows that scientists are only just beginning to scratch the surface of what we know and understand about the ocean.

It is estimated that there are more than 10 million undiscovered creatures dwelling in the ocean.

For now, researchers use what they know and advancing technology to be able to expand our small amount of knowledge about the blobfish and other deep-sea species.

Its unique adaptations to the bottom of the oceans; its deformation when it is hauled out of the water; its habits and lifespan; its lifecycle, and its reproduction and conservation have become an exciting research topic for many around the World.

Blobfish may be the ugliest marine animal in the World, but it is gaining popularity and the interests of many marine life enthusiasts around the World.